What is this countdown to the Rugby World Cup of which you speak?

Unless you've been living under a ruck all year, you'll know that the 2015 Rugby World Cup, in England and Wales, is nearly upon us.

This Sunday, the squad for defending champions New Zealand - or the "All Blacks" as they are popularly known - will be named at the home of the side's most fawning fairweather fans.

Coach Steve Hansen and selectors still have a few calls to make about locks and loose-forwards and first-fives and outside backs. If they're sensible, they'll take a punt on Jeremy Thrush, Victor Vito, Nehe Milner-Skudder and Cory Jane.

Is this really an appropriate place to peddle such implausible pro-Hurricanes bias?

Has the public mood been captured?

Not exactly. But they're working on it. Capsules on the London Eye, for example, will be draped in the flags of participating nations.

That's not our flag.

Who are the favourites?

New Zealand, by a decent margin, according to bookmakers, followed by England, South Africa, Australia, and Ireland. It's worth remembering that in the seven World Cups so far, only five teams have made the final: NZ (two wins out of three), Australia (2/3), South Africa (2/2), France (0/3) and England (1/3).

Top facts. Any other top facts?

Three of the teams in the 2011 semi-finals were coached by New Zealanders. In 2015, seven of the 20 teams have Kiwi coaches.

How does the tournament work?

There are four pools of five teams. The top two in each qualify for the quarter-finals, and so on. 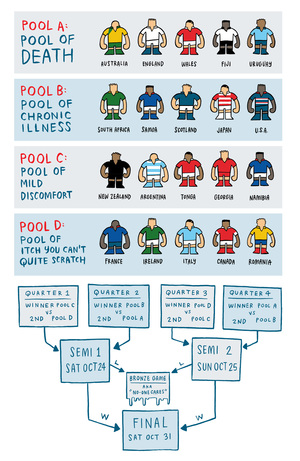 Which is the toughest pool?

Pool A includes England, officially ranked third in the world, Australia (fourth), Wales (sixth) and Fiji (ninth), owing to the draw taking place back in 2012, amid a Welsh blip, when they'd slipped to ninth. Best of luck to 19th-ranked Uruguay.

Do the All Blacks have a smoother path?

Much. The other sides in Pool C are Argentina, Tonga, Georgia and Namibia. Beat them all, and it's a quarter-final against Ireland or France. In Cardiff.

Moving right along. Any bad news for our brave boys?

An easy pool will leave them undercooked for the quarters. A nucleus of players are over the hill. They've peaked too early. They've never won it abroad. The English press will attack McCaw for pushing the laws and the haka for providing an unfair advantage.

And the good news?

An easy pool will leave them fresh for the quarters. A nucleus of players have unprecedented experience and expertise. They arrive full of confidence after a run of wins, complete with the cold shower of Sydney the other week. They've never won it abroad, providing further motivation. The English press will attack McCaw and the haka, proving how pathetically terrified they are.

What was that about Cardiff?

The only thing we'll be choking on in NZ is our breakfast martinis, right?

Everyone loves it, even the Greens!

Not everyone. Health groups opposing the legislation have dismissed arguments for the bill as "absolute bollocks" and said it will lead to "marathon drinking challenges".

Oh, that was Sean Fitzpatrick in a pink fist car, as part of a pro-celibacy Telecom campaign ahead of the last World Cup.

Not kidding. It ended up in what you might call a three-fist pile-up, with the ad being pulled before the campaign began after it was lampooned when leaked online.

Have the promotional tie-ins begun this time round?

You know they have. There's the Air NZ safety video thing, there are special All Black approved nappies, and the big Fonterra label Anchor is running a campaign that may make you thirsty for a pint of Guinness, possibly at breakfast time.

In 2011, Stephen Donald came to the rescue after the No 10s fell like flies. Who might be Beaver this time round?

Stephen Donald. He's just signed to get some warm up games with Waikato. He'll be the one whitebaiting in the Regent's Canal.

Twenty nations battle it out for the ultimate rugby prize over six weeks, and then one of New Zealand, England, Australia or South Africa wins.

Please not France in Cardiff.

* This column is part of a weekly series, that is published every Wednesday, by graphic artist Toby Morris and journalist Toby Manhire.