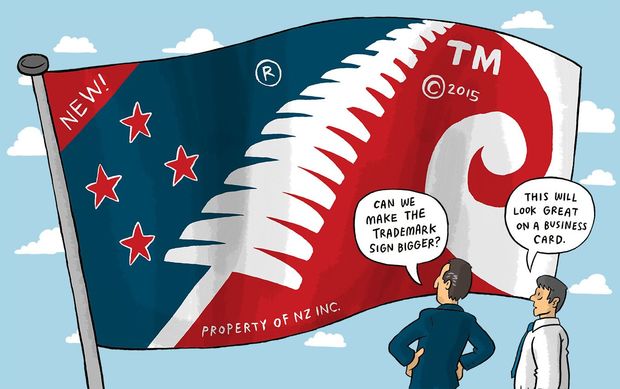 What is this flag flap of which you speak?

The living rooms of New Zealand are boiling over, or lightly simmering, at least, with talk of the national hoistable tea towel. In November, the first of two postal referendums will see voters choose their preferred alternative to the current flag from four options. The second, in March 2016, will pit the incumbent against the challenger.

"The New Zealand flag symbolises a colonial and post-colonial era whose time has passed," reckons the prime minister, John Key. A replacement could "build overt signs of patriotism".

What is more, people get "terribly confused" distinguishing Australia's flag and ours, which is both funny and annoying at multilateral summits.

Apart from anything else, it's just a bit weird having another nation's flag occupying a quarter of our own.

Almost as weird as the nation itself being named after a low country province in Holland.

Well, there is that.

What is it about?

The PM routinely points to Canada, which binned its Union Jack stamped flag 50 years ago, as the exemplar. "Show me a single Canadian on the planet who would go back to their old flag," he said the other day. "Not a single Canadian would."

Well done, smarty-pants. Have a biscuit.

Given the Canadians turn out to be the biggest foreign investor in New Zealand, maybe we should just adopt their flag. The Canadians are coming (very politely)!

Do you have any more questions?

It's going to cost billions?

No. It will cost a piffling $26 million, but, "basically in the end it's going to be worth billions over time ... if we change our flag and people recognise and buy our products", says the PM.

So it's a logo for Brand NZ?

Of course not. It's a flag. Why do you hate New Zealand?

Has it captured the public imagination?

In the words of one of the country's best political commentators, "the flag debate is dividing the nation to near-Springbok Tour proportions".

Really? Those workshops must have been wild!

Some of the workshops barely cracked double figures, it's true. Even then it seemed many of the participants were journalists, attending to report on the feeble attendance.

It's all online, though, these days.

Indeed. Tens of thousands looked at the website, and there were 10,292 flags submitted.

That's a lot of flags.

Fear not. The panel have distilled them to 40, which they'll further reduce to four (or possibly three) by mid-September.

Variations on themes: 22 flags feature Southern Crosses, 19 sport koru and 11 silver ferns. Just two include none of the above.

Looks a bit like an art project by a class of fourth-formers.

Year 10s, you mean. You're showing your age.

London-based NZ author Matt Suddain said the collection looked "like logo options for a provincial freight company done by the owner's son." But the panel do after all say "A great flag should be distinctive and so simple it can be drawn by a child from memory".

Easy-peasy. Here, have a go:

Gareth Morgan ran a parallel contest, and came up with an interesting crop.

Gareth! Knew he'd be involved somewhere. What does he make of the longlist?

"The most banal, vacuous attempt by Corporate NZ to take over our identity ... a jumble sale of Kiwiana motifs."

Other thoughts on the 40?

Some interesting perspectives - and alternative lists - are at the Design Assembly site.

And which designers are on this panel?

The Flag Consideration Panel includes, among others, an advertising executive, an ex-All Black, and a reality TV expert.

Very good. But which designers and visual artists?

As one bearded designer type put it: "Imagine if we were having this discussion about changing the national anthem. It would be pretty bizarre if the panel didn't include a single musician, right?"

What about becoming a republic? Isn't changing the flag putting the cart before the horse?

No. The PM calls himself "the biggest constitutional monarchist out". Besides, no one travels by horse-drawn cart any more. You're showing your age.

Where are the opposition parties on this?

Flapping in the wind.

Has it attracted attention overseas?

Loads. It's probably the biggest NZ story since the Marmite shortage. John Oliver this week took a second bite at the subject, chuckling at joke submissions such as the magnificent Lazar Kiwi. But Oliver was funnier first time round, when he suggested the silver-fern-on-black looked like the flag for a vegetarian pirate ship.

Over two referendums New Zealanders will vote on a flag change. Commentary will swell with words no-one uses in real life like ensign and vexillology.

The Lazar Kiwi was robbed.

* This column is part of a weekly series, that is published every Wednesday, by graphic artist Toby Morris and journalist Toby Manhire.