The simple act of posting a letter in your neighbourhood mail box is getting a little bit harder by the day. 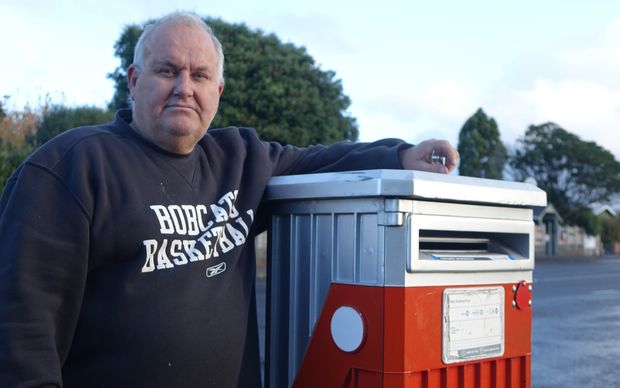 Stephen Parkes is surprised the mail box outside his auction business has been earmarked for removal. Photo: RNZ / Robin Martin

Stickers have appeared on about half of the 31 post boxes in Lower Hutt saying they would soon be removed because they were underused.

In New Plymouth, about a third of mail boxes had recently disappeared or were about to be removed.

NZ Post chief operating officer of customer service delivery Ashley Smout said mail volumes had dropped about 50 percent over the past 10 years, from 1.2 billion items to about 600 million, and it was in this context that mail boxes were being removed.

"Some of these boxes have got less than 10 items a day, and obviously we have to send a courier or some other vehicle around to service them.

"When it gets to that level of usage, that's when we start to review it."

Mr Smout said NZ Post expected no direct savings from removing the mail boxes and was open to retaining some low volume units.

"I would hope that we would pause very carefully before we disadvantaged for instance the elderly proportion of the population, or you know if there was a mail box that was specifically used by for instance a retirement village was local to it, I hope we would be sympathetic to that."

That would be good news to national president of Grey Power, Terry King, who said many of his members still relied on the post.

"They're used to sending letters and parcels at Easter time or Christmas time to friends and relatives.

"So any removal of boxes to an extent is an inconvenience."

Mr King said if a mail box was near a rest home, it should be retained regardless of whether it had a low volume of letters or not.

But he was sympathetic to the economic challenges facing NZ Post.

Stephen Parkes, owner of New Plymouth Auctions on St Aubyn Street, was surprised the mail box outside his business was due to be removed.

"Well I didn't know that, but if that's the case, if you give me the time I will stand in front of it.

"It's actually quite ironic that one there, because where the mobility carts go down there on the corner, they drive up and they post their mail without actually getting out of the car, it's wonderful for the old people."

The mail boxes in Lower Hutt are due to be removed next week but New Plymouth residents still have three weeks to give NZ Post feedback via an 0800 number shown on the affected boxes.