An Auckland woman is rallying banks around the country to provide interest-free mortgages to Muslims looking to buy their first home. 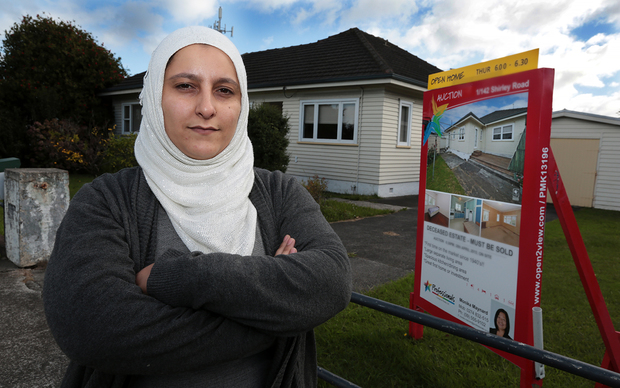 Sara Jawadi said because interest was forbidden in Islam, thousands of Kiwi Muslims were having to choose between their religion and economic stability.

The 28-year-old moved to New Zealand 11 years ago, and now lives in Manukau with her husband and two young children.

"I'm not going back to Iraq anytime soon, and I want to create some sort of stability for my family," Ms Jawadi said.

Like many migrants she said her family had struggled to escape the rental cycle.

"With rent, you're not guaranteed that you can stay in that place for too long ... we're sort of trying our best to find an alternative."

Standard mortgages, because of their reliance on interest, are heavily frowned upon in Islam.

As a devout Muslim Ms Jawadi is trying to convince the bank to give her a home loan with no interest.

"It means that one side of society, which is a very small number of people, will be reaping all financial gains all the time, while the sweeping majority of the members of the society will be losing all the time."

In 2006, several small-time firms began answering the call, offering home loans with a set profit margin for the bank without a fluctuating interest rate.

However, none survived the global financial crash that would come two years later.

This left the once-hopeful Muslim community split over the mortgage issue, with older generations fearful they would not be able to keep paying rent once they retired.

So Sara Jawadi decided to get proactive.

"I've been working on putting a proposal together for banks or investors who can help in that area financially, so it's beneficial to them, but also avoids interest for us as Muslims."

She has been in contact with ANZ, BNZ, Westpac and Kiwibank, but none have yet responded.

One initiative that is trying to tackle the problem is Amanah Ethical, which launched in January this year, offering alternative Kiwisaver plans for Muslims.

"The initial starting point is that you have to participate in the investment in a company that's making or doing something, you're not allowed to be in the paper-shuffling, Goldman Sachs-type, it has to be a solid company."

Mr Henry said the company aimed to provide home loans for the Muslim community in the near future, but that could only happen with a long-term vision.

He said previous attempts failed because they relied on shortsighted practices prevalent in the lead-up to the global financial crisis.

"What Amanah Kiwisaver does is gives us a seed base to establish a professional group of New Zealanders who understand what the rules are, and can actually then work to build that sort of an investment opportunity."

Until then, Kiwi Muslims are waiting with bated breath.

Islamic Law expert Raafat Najm, who has lived in New Zealand for 19 years, said the stagnation he felt as a long-term tenant was overwhelming at times, but there was a solution.

"I believe it's possible, that the Muslim community should try its best to establish financial organisations recognised by the state to enable Muslims to buy houses in accordance to the Islamic way without any contradiction with the financial system of New Zealand."

He said the community could take the lead from Australia and the United Kingdom where examples of Islamic mortgages have been successful for more than 20 years.