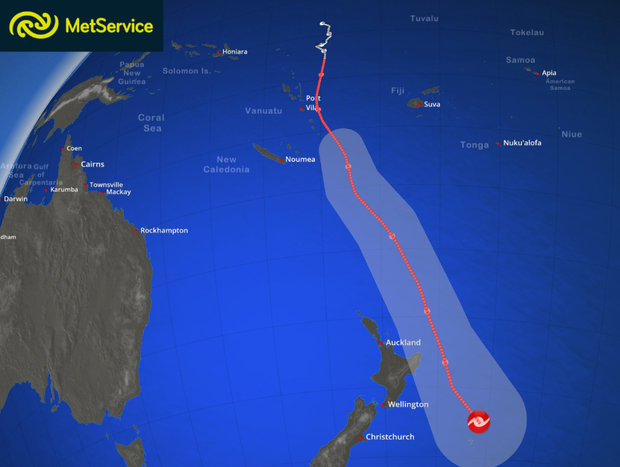 The forecast path of Cyclone Pam from MetService. The cyclone's track is shown in red and the surrounding grey area gives an idea of its possible spread. Photo: METSERVICE

At the moment, the storm system is expected to move out of the tropics on Sunday morning and bring severe weather to the East Cape, the Gisborne region and northern Hawke's Bay from Sunday through to Tuesday.

MetService meteorologist Peter Little said a combination of huge waves and strong onshore winds would make for extremely dangerous conditions near the coast.

There is uncertainty as to how close to the North Island the eventual cyclone track will be but it has the potential to be a significant event, MerService said.

Farmers in the North Island are preparing for the arrival of Cyclone Pam - but also hoping it brings much-needed rain to parched pasture.

But Federated Farmers Northland President Roger Ludbrook said they were hoping this time round the positives would outweigh the negatives and said the region was looking forward to a good dollop of rain.

"You have to take some precautions, and so I'd expect power cuts if the weather really does go crazy. Also if there is going to be excessive rain, you just need to be looking at your farms and working out, if you've got low-lying areas, you don't have cattle or sheep in those areas over the weekend and probably into Monday."

Hawke's Bay farmers are also hoping Pam will bring some rain, but without the storm damage associated with cyclones.

Figures from Hawke's Bay Regional Council highlight how dry it has been.

The council estimates that the region needs at least 75 millimetres of rain over an extended period to replenish soil moisture, restore river flows and get crop and pasture growth going again.

Council chairman Fenton Wilson, who is also a farmer, said unless that happens soon, they may be heading for another state of drought declaration.

"It's actually quite worrying that some of our figures are worse than the last drought - which is still fresh in people's minds - so if you think back, that took out most of the country.

"The east coast of both islands is quite severely challenged at the moment, with moisture deficits. I didn't think it was quite as bad as the figures indicated.

"We've had little licks of rain all the way through, 10 mils here, 10 mils there, and it sort of kept a tinge of green in the countryside, but really there are still challenges of stock water and other things that could be quantified now," he said.

Ministry of Civil Defence and Emergency Management Director Sarah Stuart-Black urged people to listen to weather forecasts carefully during the weekend, and keep an eye on council websites for the latest information.

"Closer to the time it's clear that there are going to be high winds or driving rain, then we would recommend not travelling unless absolutely necessary, not walking around outside."

Ms Stuart-Black said people in areas likely to be affected should check large items outside their homes were secure, and remove any that could become a missile in high winds.

Civil Defence advised organisers of events such as the Pasifika Festival in Auckland to talk to emergency management staff in their area and watch forecasts to make decisions about postponements.

"The track is for the centre of that system to stay towards the north and the east of East Cape, but it does mean we are still going to find that some stronger winds and heavier rainfall across parts of the North Island."

He said people should not travel on Sunday evening unless they absolutely had to.

"Tatapouri and the Waima Road at Tokomaru Bay may be closed early to avoid major problems," Mr Steele said.

Other roads in the district, such as the Nuhiti Road past Anaura Bay, may also be closed as a precautionary measure.

He said people should listen to advice from Gisborne Civil Defence Emergency Management, keep an eye on the council website and listen to local radio stations.

The Coastguard yesterday warned boaties to take extra care in securing their vessels.