New Zealand appears to have escaped largely unscathed from the 1080 poison scare, with major dairy exporters saying their orders from overseas markets haven't dropped off. 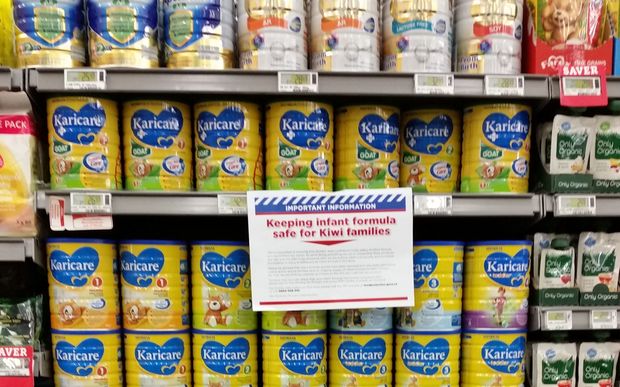 However, some smaller companies have been caught out by new restrictions China has introduced in response to the threat, with more than $1 million of infant formula stuck at Chinese ports without the right paperwork.

New Zealand's global exports of infant formula are worth about $600 million a year - and nearly a third of that ends up in China.

A New Zealand investment manager who has lived in China for thirty years, David Mahon, said the Chinese response to this week's scare had been low-key.

"The picture is out and there is no great reaction in China and there certainly hasn't been, from the Chinese government, anything adverse - in fact, the opposite."

That could change rapidly if the threat turned out to be real, Mr Mahon said.

"Let's say someone did manage to achieve contamination of dairy products in New Zealand and it was found in supermarkets, then we have another phase of the story.

"But absent that, I think this will go away quite quickly."

Fonterra would not confirm whether any of its orders had been cancelled or put on hold, saying that information was commercially sensitive.

But share prices for its Shareholders' Fund and Cooperative Group were steady at $5.80 yesterday.

Another large producer, Synlait, said it did not expect any significant interruption to its exports.

The chair of the Infant Formula Exporters' Association, Michael Barnett, said markets for infant formula outside of China, such as India, had not cancelled or slowed down orders.

But within China, some smaller New Zealand exporters had taken a temporary hit, he said.

"The distributors that they deal with [are] being cautionary and what they're doing is saying, 'Listen, reduce our order flow by 50 percent, 60 percent, let's watch the market over the next little while.'"

Those smaller exporters had also been caught out by new restrictions imposed by China in response to the scare, Mr Barnett said.

Since Tuesday, all infant formula exports to China have needed a certificate verifying they have tested negative for 1080.

Many small exporters had no idea about the new rules, and had shipments already in China or on their way there, Mr Barnett said.

"For a small exporter, he can have a couple of million dollars worth of product sitting on a port in China, and his terms of payment might be really important to him."

About $1.5 million of exports were already stuck at a Shanghai port, he said.

He hoped the Ministry for Primary Industries could help smooth the way for them to enter China.

Meanwhile regulators have said listed dairy companies Fonterra, Synlait and A2 Milk have complied with stock exchange disclosure rules, despite not telling the public when they learned about a potential threat to their industry.

The Financial Markets Authority (FMA) and NZX said there were exceptions to the continuous disclosure rules, which applied in this case.

The NZX and FMA said they considered that the release of imprecise information could have had an unintended adverse impact on trading in those securities.

Both regulators were also informed of the police and government investigation, and the NZX said it would review any relevant transactions in the affected companies to make sure there had not been any irregular trading.

FMA compliance director Elaine Campbell said the threats to the industry were held in confidence, and it would not have been reasonable to publicly disclose this information.