The police officer who took the initial video of the Lundy crime scene wore protective gear and made sure he did not move off the stepping plates, he has told a court. 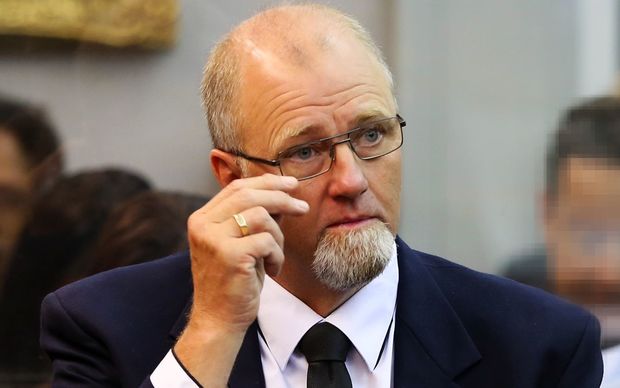 Mark Lundy, 56, has pleaded not guilty to murdering Christine and Amber Lundy, whose bodies were found in their Palmerston North home on 30 August 2000. They had been bludgeoned to death.

The Crown contends Mr Lundy killed his 38-year-old wife for her insurance money, and his seven-year-old daughter because she saw what he was doing to her mother.

Key points from day 12 of the trial:

"I was careful to step on the plates. I did not step off the plates at any time," he said.

The stepping plates went only as far as the master bedroom doorway, where Amber's body was lying, so Mr Andrews stood on the plates in the doorway and used the camera's zoom.

The jury was this afternoon showed Mr Andrews' video of the crime scene, with the bodies of Amber and Mrs Lundy pixelated.

Mr Andrews was asked about a second video, which appeared to show a police officer watching TV in the lounge. He said he did not take that video, and it was not from 30 August.

Senior crime officer Ross Peat, who was responsible for fingerprinting the scene, told the court of finding red staining on a window and frame which was subsquently identified as blood.

However, there were no signs of finger prints.

"When looking at this area of, I will say blood, it was a [fabric] mark which had no constants, no parallel lines, it was smudges and smears with nothing, no symmetry to at all," Mr Peat said.

He also found marks on the window frame which he believed had been left by a tool.

Police examined the windows of neighbouring properties for tool marks and finger prints, and also looked for flattened grass below them, he said.

They were looking for signs someone was "peeping and peering", or committing some other "sinister act" in the area but found nothing.

Mr Peat said what he wore while carrying out his work varied on where he was doing it but that he always wore clean paper overalls, gloves and booties when working in Mrs Lundy's bedroom - the main crime scene - for the safety of himself and the scene.

Earlier today, defence lawyer David Hislop, QC, questioned Detective Senior Sergeant Nigel Hughes, who was in charge of control and security at the Lundys' home after their deaths, on steps taken at the home to ensure evidence was not contaminated.

Mr Hughes said stepping plates were used by personnel to ensure they did not step on evidence on the floor.

However, Mr Hislop today pointed to a photo apparently taken without a stepping plate; Mr Hughes said the photographer had moved the stepping plate "very carefully" and then taken the photo. 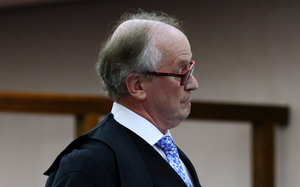 "Do you remember this, or is this something you're making it up as you go along," Mr Hislop asked.

Mr Hughes replied he was "confident that at no stage did we go off those stepping plates".

However, he then admitted he had no recollection of the particular photo being taken.

Mr Hughes had earlier said all personnel involved in investigating the scene had worn protective overalls, booties and gloves.

However, Mr Hislop had a video played to the court which showed someone in the lounge of the house - apparently watching TV - who was not wearing protective gear.

A second video showed two officers leaving the house, neither of whom was wearing booties or paper overalls.

Crown prosecutor Philip Morgan, QC, asked Mr Hughes about the stepping plates and protective gear, and showed footage of an officer on a stepping plate wearing gloves and police overalls.

He also pointed out photos in which the stepping plates were visible and asked how officers used them to move around a crime scene.

Mr Hughes said it was challenging and likened it to "boulder hopping" across a river.

"You can move from point A to point B with X amount of plates," he said.

"I know that we used them at all times."

Mr Hislop had also questioned Mr Hughes about storage of exhibits and showed photos from the Lundy house in which exhibit bags appeared to be piled on top of each other in the office. Mr Hislop asked whether there was a risk of contamination.

"I guess the risk, you couldn't rule it out, but in that situation there very minimal, in fact unlikely," Mr Hughes said.

Those exhibits were mostly paperwork taken from the office, Mr Hughes said.

Exhibit bags were, as a rule, sealed with thick tape around both edges and on top, and often signed, he said.

Detective Sergeant Rochelle Ross told the court she was tasked with documenting the contents of the Lundys' office which were relevant to the investigation, to establish their financial situation.

"In effect, I read documents for two days," she said.

Ms Ross took 29 pages of notes during two days but nowhere did she note the existence of a laptop. If she had seen one she would have noted the make and model but would not have seized it as evidence as a computer expert would do that.

Ms Ross was later tasked with finding Mrs Lundy's jewellery box and contents but despite extensive inquiries, including media advertising and visiting all secondhand shops in the area, she was unable to locate it or a replica.

Mr Lundy's retrial, before Justice Simon France and a jury of seven men and five women, is in its third week in the High Court in Wellington.