Mark and Christine Lundy had increased their life insurance to $500,000 each when she was killed but no policy document had been issued so a previous amount of $200,000 applied, the High Court in Wellington has been told. 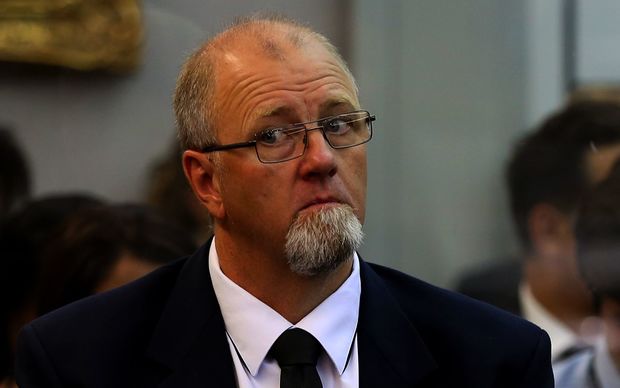 Mr Lundy, 56, has pleaded not guilty to murdering his wife and daughter, Christine and Amber Lundy, whose bodies were found in their Palmerston North home on 30 August 2000. His retrial, before Justice Simon France and a jury of seven men and five women, today entered its second week.

Read a recap of the first week of the Lundy trial

Life insurance agent Bruce Parson today told the court the Lundys had taken out $200,000 of life cover each in 1997.

He recommended they increase it to $1 million each in 2000 but they could not afford the premiums so instead opted for $500,000 of cover.

They signed for the new level of cover on 25 August and gave a cheque for the premium.

Mr Parson said he told the Lundys the new amount would not apply until Tower Insurance issued a policy document - something which had not happened by the time Mrs Lundy was killed.

In early 2000, Mr Lundy signed up to buy 44 hectares of land to set up a vineyard, with the contract due to go unconditional before he had secured finance.

Landowner and vineyard/orchard contractor Michael Porter put the deal together and Mr Porter today told the court Mr Lundy missed the first settlement date in March, and then subsequent dates.

Mr Porter told Mr Lundy in July of the impending deadline, and then rung him again on 28 August - two days before it.

Mr Morrison said he spoke to Mr Lundy in July about the continued settlement delays.

"He was still very positive. He was apologetic about the delays," he said.

Mr Lundy told Mr Morrison the delays were caused by documentation issues, and that he believed the only problem would be an excess of investors; in fact, only about $108,500 was raised.

Earlier today, Palmerston North accountant Ross Hadwin told the court Mr Lundy needed to raise about $2 million for the vineyard venture and that he aimed to do it through shares and mortgage bonds. Shares provide investors with a dividend but can be variable depending on performance, while mortgage bonds give a fixed rate of return.

Mr Hadwin was going through the process needed to set up the scheme when he became aware Mr Lundy had signed a contract to buy the land for the vineyard.

He then tried to get bridging finance of about $2 million from Westpac Bank to allow the contract to be settled.

The money was to be repaid once investors were found. However, the bank turned him down, Mr Hadwin said.

At that stage, investors had committed only $70,000-$80,000, and Mr Hadwin and partner David Hopping warned Mr Lundy the venture would fail if the uptake did not improve.

"We were concerned at the slowness of the uptake," he said.

Mr Hopping told the court Mr Lundy said he was not too concerned about the slow uptake.

However, Mrs Lundy had a different take on it.

"She said they were a little concerned and at one point she told me that Mark had had a bit of a stress attack one evening," Mr Hopping said.

That conversation occurred only two to three weeks before she and Amber were killed.

Mr Hadwin said he believed the vineyard venture had potential, and that similar ventures had been successful.

The court also heard that Mark and Christine Lundy's kitchen sink business grew steadily but their debt to the parent company remained about $100,000 in debt.

Company director Robert McLachlan - who the Lundys were distributors for with their business Marchris Enterprises - gave evidence this morning.

Mr McLachlan told the court all distributors except the Lundys paid their debt to the parent company each month.

He allowed it, partly because he was "a softie" but also because "I always knew that Marchris Enterprises was under-capitalised when they took the responsibility of distributing our products".

The company and its distributors were successful, and business grew year-on-year.

Mr McLachlan regularly had his accountant or lawyer send the Lundys letters about their debt, and by July 2000 moved to have a debenture for $150,000 put over Marchris Enterprises.

In early January 2001, Mr Lundy told Mr McLachlan he planned to use money he was expecting from Mrs Lundy's life insurance payout to settle his debt.

When that did not eventuate he tried to raise money using the house as security for a bank loan.

However, the debt remained; by 23 January 2001 it was up to $160,000 and the parent company put Marchris Enterprises into receivership.