With the Cricket World Cup only four days away, researchers at Canterbury University decided to programme a robot to predict the winner.

And some may find the result surprising.

The robot, called Ikram, follows on from Paul the Octopus, which made predictions for the 2010 FIFA World Cup, and the sheep, Sonny Wool, during the 2011 Rugby World Cup. 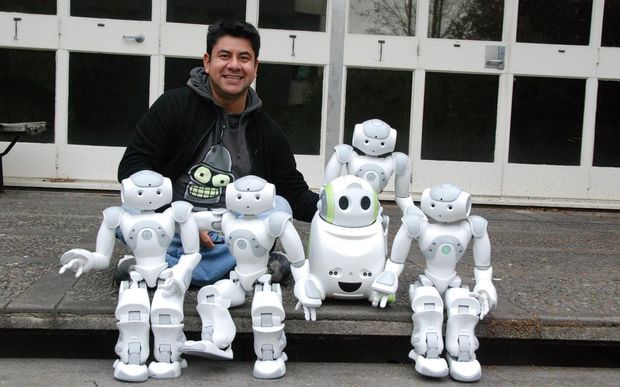 Eduardo Sandoval and some of the University of Canterbury’s research robots. Photo: Supplied

The robot made its decision based on the flags of competing countries.

University of Canterbury student, Eduardo Sandoval, decided to forecast a winner of the tournament which opens in Christchurch on Saturday. He developed software for the robot to help predict the outcome of the Cricket World Cup. Mr Sandoval was recently awarded the Alfonso Caso medal from the National University of Mexico for his industrial design research.

The University of Canterbury has six Nao robots and in the past they have performed a rugby haka and Gangnam style dances.