Forensic scientists have unveiled a cutting edge 3D scanner which will give jurors a new insight into crime scenes.

Environmental and Scientific Research (ESR) has two new $60,000 laser scanners which can map crime scenes by capturing millions of measurements in seconds.

ESR forensic scientist Jason Barr demonstrated the scanner in a bedroom with blood-splattered walls riddled with bullet holes - a mockup of a typical crime scene at ESR's site at Mt Albert in Auckland. 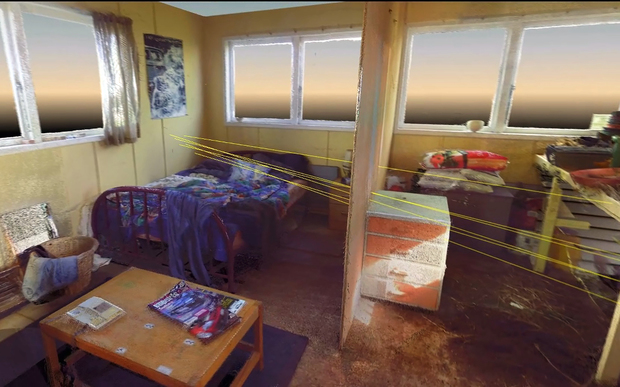 "Previously, you were unable to turn up to a crime scene and measure every single thing in a crime scene. What this devise allows us to do is it allows us to take every single measurement from every surface, every height and later be able to analyse that data in 3D back in the laboratory for reconstruction purposes and investigative purposes."

The scanner has a touch screen interface and is able to measure at speeds of up to 976,000 points per second up to a range of 130 metres.

The data is converted into a 3D video made up of millions of measurements recorded.

ESR's investigators will use the scanner to accurately measure the position, size and orientation of evidence such as firearm trajectories or blood patterns in crime scenes.

She said the technology made it easier for juries to visualise the crime scene.

"It effectively replaces what used to be the photobook," she said.

"Rather than, for example, a juror being asked to turn to page 63 looking at photograph B and then thumbing through several pages to get to that, instead they're looking at at screen and there is then the ability to highlight certain items."

Dr Vintiner said New Zealand had worked closely with lawyers, police and the Justice Department to become a world leader at getting the technology into the courtroom, and more and more crime scenes would be recorded in 3D and used at trials.

"This is a huge step. The real positives this technology brings is particularly around blood stains and firearm trajectories. So really at the moment that's the kind of crime scene we're focussing more on but it also brings a much quicker way to record a scene so whether or not we use it at all scenes I'm unsure but I expect it will be at the majority of scenes."