Soaring temperatures are continuing throughout the country as the final week of school holidays rolls on. 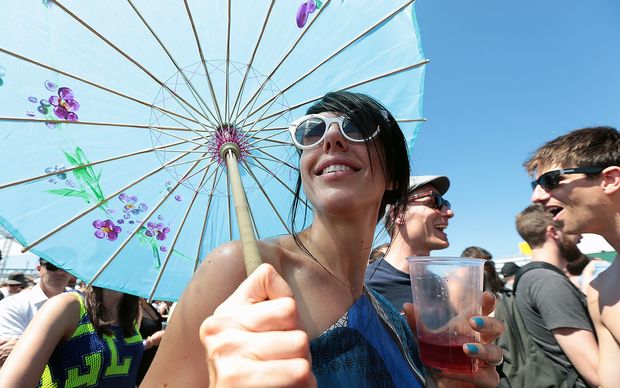 A festival-goer at Laneway enjoys the sun in Auckland on 26 January 2015. Photo: RNZ / Diego Opatowski

Beaches around Auckland stayed packed into the evening last night, with families picnicking, and playing in the water and on the sand well past 8pm.

A group at Kohimarama Beach told Radio New Zealand the summer has been a special one.

"We've had the opportunity to get out of the house. Our house is a bit like a sauna. So we've definitely enjoyed coming out more," one man said.

"It's great. Probably the best ever. Day after day of good weather. Much hotter and the wind isn't up like it normally is. It's been perfect."

Helen and Graham Inderby said they had been swimming and picnicking at the beach every day. 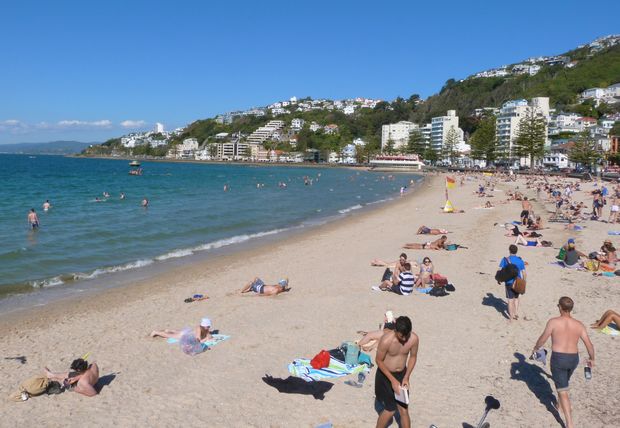 Meanwhile, Wellington is basking in a January of higher temperatures, less wind and lower rainfall than the past 52 years.

In the capital yesterday temperatures soared to over 25°C enticing hundreds to the city's beaches.

Weather statistics say Wellington's January was 1°C warmer, a lot drier and less windy compared to annual average maximums recorded for the month since 1962. Only 5.4mm of rain has fallen in the Wellington area so far this January, compared to the average of about 70mm.

Some at Oriental Bay thought that might be the start of the best summer they had ever seen.

"I've been swimming like every single day, it's been pretty warm. Windy as always but the wind is quite nice. It's incredibly beautiful. It's like, is this really happening," said one beach-goer.

"I think this is just starting. I think we're going to have a massive next month. Just the water, good vitamin D on your skin, you can't beat it," university student Lucy said.

National Institute of Water and Atmospheric Research (NIWA) data shows many areas are having record-breaking long dry spells, especially at Waipara in North Canterbury, where it has not rained for 55 days - the longest spell since 1987.

Timaru has taken out the record high to date with nearly 37°C, and Hamilton has the highest average temperature for January at 25.9°C.

But forecasters said the sunshine and beach weather were not staying forever.

MetService forecaster John Law said the eastern side of the country could expect some low cloud and humid weather throughout the week but temperatures would still be high.

"Over the next few days, we're going to notice a bit of a change, particularly down the east coast of both islands. Touch more cloud and drizzly weather. It's not huge amounts of rainfall," he said.

The Warehouse said fans and beach equipment had been flying out the doors since Christmas.

The main centres can expect more sunshine and hot temperatures with Auckland and Wellington expecting 27°C and Christchurch topping 24°C.