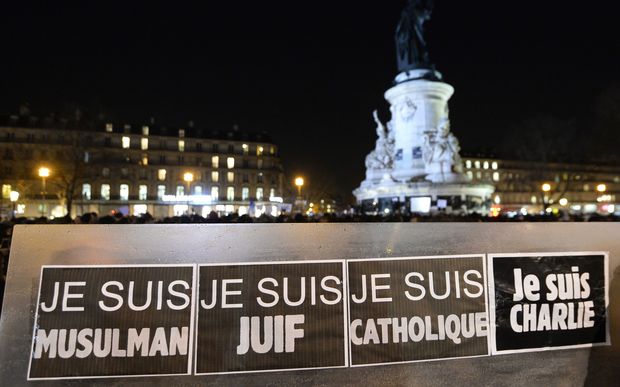 People hold a placard reading "I am Muslim, I am Jewish, I am Catholic, I am Charlie" during a Paris rally. Photo: AFP

Two days after gunmen shot dead 12 people at the offices of French newspaper Charlie Hebdo, four hostages were killed at a kosher supermarket elsewhere in the capital.

French security forces have shot dead the two brothers suspected of the Charlie Hebdo deaths and the gunman in the supermarket hostage taking. 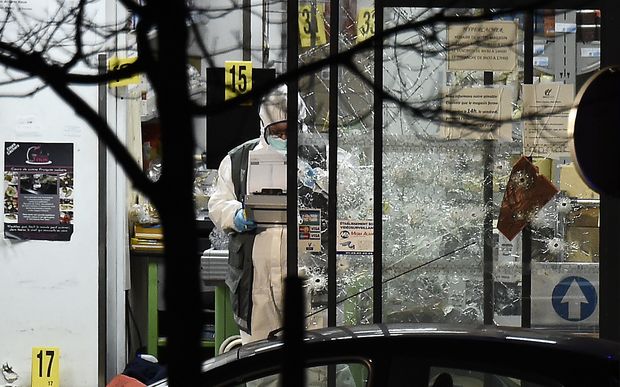 A forensic police officer works next to the bullet-riddled windows of the Hyper Casher kosher supermarket. Photo: AFP

The Jewish Council has today released a statement saying the latter is another painful example of the murderous results of unchecked anti-Semitism.

Its president Stephen Goodman said the effects of the attacks have been felt within New Zealand's Jewish community.

"This are attacks focused against the Jewish people and we feel quite threatened and quite sympathetic towards the people who have been attacked."

He said people felt uncomfortable and concerned, despite New Zealand being so far away from the attacks.

Extremist acts should not be allowed to define religions

A Muslim community leader says acts of extremism such as the killing of 12 people at Charlie Hebdo, should not be allowed to define religions.

Sultan Eusoff, a Muslim member of the Wellington Council for Christians and Jews, said the attack in Paris ran counter to the teachings of the Koran.

He said it was sad that some Muslims were taking passages in the Koran in the wrong context and using them to legitimise violent action.

Mr Eusoff said there was no justification for violence in the Koran.

A prayer vigil is being held at the Wellington Islamic Centre in Kilbirnie at 3pm tomorrow.