Seventy-five years ago New Zealand sailors helped strike the first naval blow at the enemy at the beginning of World War II at what has become known as the Battle of the River Plate. 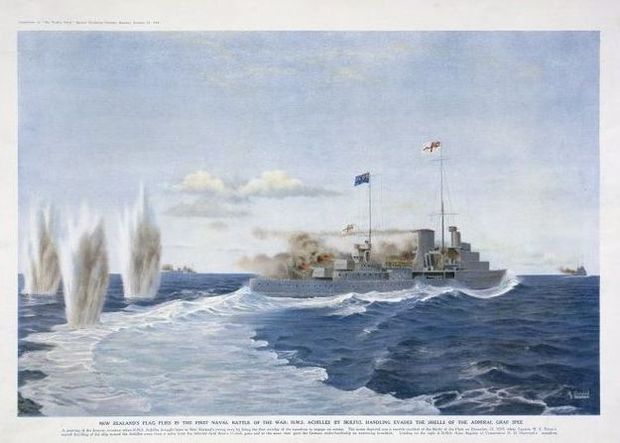 A painting by Arthur John Lloyd (b 1884) depicting the Achilles with the New Zealand flag flying during the Battle of the River Plate. Photo: Ref: C-055-004. Alexander Turnbull Library, Wellington, New Zealand

The morale-boosting Allied victory saw the HMS Achilles, a ship loaned to New Zealand by the Royal Navy, join the HMS Exeter and HMS Ajax in hunting down and attacking the German pocket battleship Admiral Graf Spee off the coast of South America. 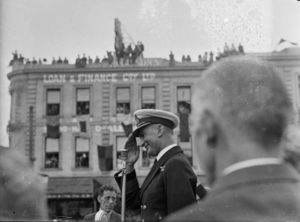 The German vessel was damaged in the battle and made port at Montevideo in Uruguay. But being a neutral port it could not stay there, and instead of making a run for it the Graf Spee was scuttled in the harbour four days later.

The Achilles, Exeter and Ajax engaged with the Graf Spee early in the morning of 13 December 1939. The German ship was more heavily armed than the three cruisers, but the 82-minute engagement ended inconclusively.

The Exeter was badly damaged, while the Achilles and Ajax were hit a number of times. Seventy-two men from the three ships were killed, including two New Zealanders. Thirty-six German sailors died.

Bob Batt from Whakatane is 92 and one of four New Zealand veterans of the battle still alive. He was a 17-year-old seaman at the time.

"We had six-inch shells in our turrets and a salvo from them was bloody loud - it was big and even the four-inch going off was big and loud. 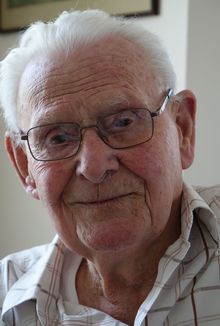 "If you were fortunate enough to have earplugs that was what you were wearing, otherwise you were deaf for ages afterwards."

Bob Harvey was also a young sailor on board the Achilles and spoke in 1997 about going into battle.

"We were all trained to do a particular job and we got stuck into it straight away. As youngsters we didn't really take life terribly seriously, everything was a great thrill, it was new. We were trained to do a job and we did it almost automatically. It wasn't until afterwards we realised that we could have been killed."

Mr Harvey says progress reports were coming in from the Ajax's aircraft about how successful the guns were at hitting their target.

"As history has told us, the number of shots relative to the number of shells we fired wasn't a great number but they did a lot of damage and damage that affected the (Graf Spee) ship's company. A couple of times during the day we did have alarms but they didn't start firing again, they just kept their distance knowing that he was going into the coast." 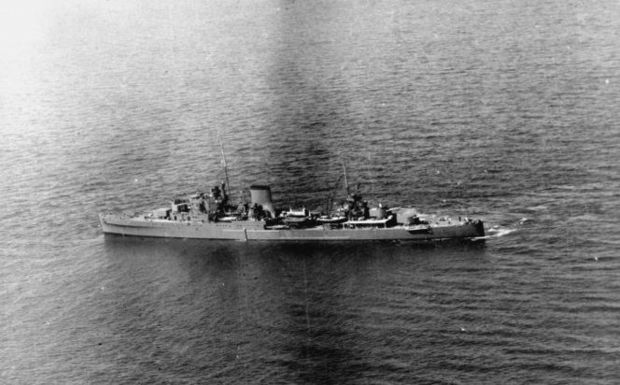 The scuttling of the Graf Spee took place four days after she went into Montevideo.

Michael Wynd, a researcher at the Navy Museum believes the Graf Spee's captain, Hans Langsdorff, had no real option than sink his ship.

"Because he is absolutely convinced that there are battleships and aircraft carriers about to arrive off Montevideo and he won't be able to fight his way through." 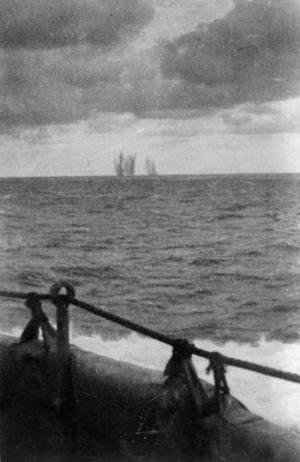 A photograph taken from the Achilles showing shells from the Graf Spee bursting on the water in 1939. Photo: Ref: DA-00611-F. Alexander Turnbull Library, Wellington, New Zealand

Thomas Luckman, was a lieutenant on board the Achilles and in 1951 recalled the event.

"The best news of all was passed down on Sunday evening the17th of December when we were told the German (ship) had put to sea and after taking off most of the crew and a terrific explosion had taken place afterwards.

"As darkness arrived, both ships (Achilles and Ajax) approached the German ship as close as possible and we saw that the flames were shooting 50 to 60 feet into the air. The outlines of the ship could plainly be seen in the illumination."

After the war, the Commanding Officer of the Achilles, Edward Parry, spoke highly of his mainly New Zealand crew.

"None of my sailors on the Achilles had ever been under fire before and yet our ship certainly fought at least as well as the two others. Indeed, I would go further and say the Achilles did more damage to the Graf Spee during the later stages of the battle than the Exeter or the Ajax."

Michael Wynd describes the Battle of the River Plate as a great propaganda victory.

"In a period in what is called the phoney war this defeat of a large German warship is a great propaganda victory for Britain - something to tweak the Germans and it was also very important for New Zealand."

Mr Wynd says the pride felt by New Zealand was borne out by a welcome home parade held in Auckland where thousands of people lined Queen Street to welcome the crew of Achilles home on 23 February 1940.

This will be re-enacted with a naval parade in Auckland tomorrow morning from 11am featuring 582 sailors, with the four surviving veterans travelling in vintage cars.

Earlier, there will be a wreath laying ceremony at 9am and a ceremony on board HMNZS Te Kaha to honour the veterans at 11.45am.