Reports of the private sale of a moa skeleton at an auction in Britain have left a moa expert in New Zealand disgusted. 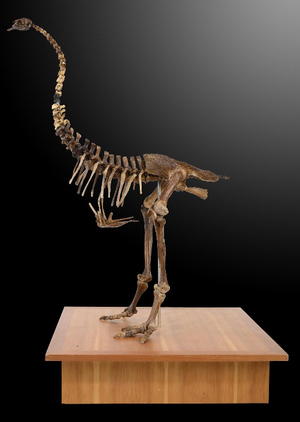 Moa skeleton for sale at auction in Britain Photo: supplied

The extinct New Zealand bird's remains were sold for about $110,000 to an unknown bidder in the south of England.

The sale followed online auction company TradeMe saying earlier this month it was legal to sell moa bones unless they came from conservation sites.

University of Canterbury fellow Richard Holdaway said he was disgusted at the sale in Britain, and was worried the bones could have been exported illegally.

"While it's legal to remove that from private land, with the owner's permission, much of what we see could well have come from DOC estate," he said.

A Ministry for Culture and Heritage spokesperson said it would check to see whether the skeleton was exported legally.

The ministry must give its permission for moa bones to be legally exported out of New Zealand but it did not know if it did in this instance, the spokesperson said. It would contact the British auctioneer in the next few days.

A giant woolly mammoth skeleton was also reportedly sold at the same auction for about $380,000.