The new Health Minister, Jonathan Coleman, is signalling a bigger focus on sport and childhood obesity over the next three years. 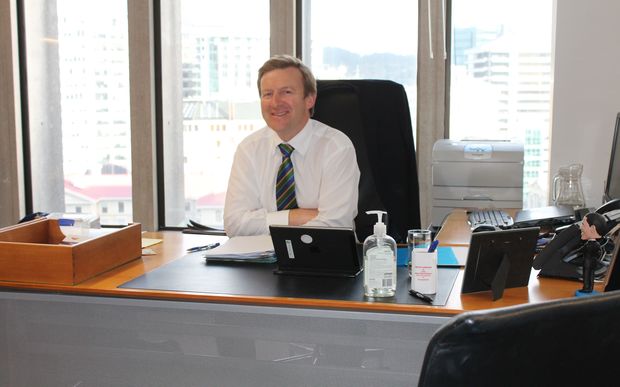 Jonathan Coleman spoke about the progress of policy initiatives such as free GP visits for children aged under 13. Photo: RNZ / Karen Brown

In an interview with Radio New Zealand News, Dr Coleman said it was no coincidence he held both the health portfolio and the sport and recreation portfolio.

"There was a very deliberate thinking behind bringing the sport and recreation portfolio together with health", he said.

"It's around - can we leverage physical activity more effectively into the health portfolio to try and deal with this issue of childhood obesity?"

He said the new Healthy Families New Zealand initiative, which was to be rolled out in 10 locations throughout the country, from Northland to Invercargill, would also be a major initiative to combat obesity.

But Dr Coleman ruled out a tax on sugary drinks.

"Some people leap to sugar taxes as being the answer. I don't believe that is the answer and we've been pretty clear, it's not something we would be keen to do," he said.

"Because, actually, in some places where they have imposed them, they've actually reversed them, and I'm not convinced that it works."

He said he was open minded about which further initiatives he might support to reduce obesity.

"But certainly the Government spends quite a bit on community sport, quite a bit on kids' sport and physical activity, and so we just want to make sure we're spending that money in the best possible way."

In a wide-ranging discussion, Dr Coleman was non-committal about when the Government might be ready to detail any future plans for national screening for bowel cancer.

He said there was no doubt bowel cancer was a big killer and a pilot bowel cancer screening programme was underway at the Waitemata District Health Board.

"We've still got to evaluate the results but, look, I think it's undeniable that everything is pointing in one direction over time," he said.

"But we've got to actually make sure we've got the colonoscopy workforce to carry out and follow up on the screening process."

Dr Coleman said the Health Ministry was still negotiating with family doctors' practices over the introduction of free GP visits for children under 13 years - a policy announced in the Government's May Budget - but he expected that well over 90 percent of GPs would agree to it.