Nurses have grilled politicians about health problems just two days ahead of the general election. 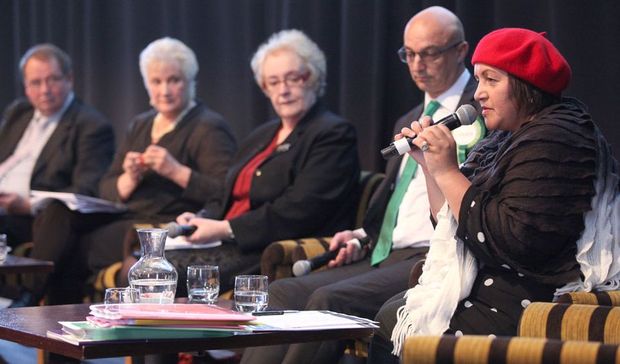 Major issues raised by the politicians included funding for health, and whether reduced funding increases under National have stretched district health boards.

Labour's Annette King said there's a $200 million hole in the health budget, and Labour was determined to meet cost pressures in future if it leads the next Government.

She also said the elephant in the room in health was the issue of obesity and Labour would seek to redress inattention to this under the National-led Government.

"The getting rid of Heha [Healthy Eating, Healthy Action programme] that was working so well in many areas.

The concern was echoed by the Greens' Kevin Hague.

"We want to use all the tools available to the Government, including taxation, regulation and legislation to control obesogenic environments and to drastically reduce the catastrophic damage that alcohol and tobacco continue to wreak on New Zealand society."

New Zealand First's Barbara Stewart said a Bill of hers providing three free GP visits for all Super Gold Card holders had been selected from a parliamentary ballot, and she hoped it would be passed in the next session of Parliament.

Maarama Fox of the Maori Party said the party had a specific focus on bringing improvement to the disparities in health for many Maori people.

She said some of the gains achieved in coalition with National and others also benefited others, such as free GP visits for those under 13.

"When we were able to influence the Government to support our push to have free doctors' visits for under 13 year olds, that didn't just happen for Maori families, that happened for the whole of Aotearoa and will come into effect in July."

Nurses had their own questions.

Charge nurse manager at Middlemore Hospital in South Auckland Wendy Gregory wanted to know what could be done for graduate nurses without jobs.

She said in the past two and a half years five nurses had left for other jobs and she had been allowed to replace just one, in June.

"Since June my own staff have done 270 hours of overtime and I've paid for 480 hours of bureau nursing, and there are girls here with no job."

Labour, the Greens and New Zealand First all pledged more support for newly graduated nurses, many of whom have struggled to get jobs following graduation.

"It is ridiculous that nursing graduates are looking for jobs, while nurses in hospitals and aged care facilities are coming under more and more pressure and sometimes have to ration care because of the lack of staff.

Canterbury-based Heather Symes said the forensic mental health unit where she worked was very short-staffed, but gets some of the most difficult patients referred to its care.

"Currently in my unit, which is a forensic, medium-secure unit, there's an individual who's been in there for over ten years because nobody else will care for him.

"So I'd just like to know what you're going to do about that service."

Pip Cresswell of the Aotearoa College of Diabetes Nurses asked Maarama Fox how the party could support National over a health system that fails many patients.

She said one of her own patients had "waited six months for his colonoscopy in the public service where he was diagnosed with a large cancer.

"He is still waiting for his surgery to remove that large cancer. That is not good enough."

Maarama Fox said the Maori Party could not defend everything National did.

But she said over the past six years under the National-led coalition, $3 billion worth of spending had gone towards Maori-sepcific initiatives.

"Let's not under-estimate how significant that is because no government in this country for 170 years has ever spent that amount of money on Maori-specific initiatives and that's why we sit at the table."