An international contingent, made up of 200 fans of the Hobbit movies, jetted into Wellington yesterday to be the first to watch the final episode of the film trilogy.

The fans were the winners of a global competition to see the final episode - The Hobbit: The Battle of the Five Armies.

The Hobbit fans were greeted at the capital's airport by Weta Workshop's Sir Richard Taylor, who had a very special surprise for them: the 75 percent scale sculpture of Smaug the Magnificent, considered to be the last of the great dragons in Middle Earth.

The fire-breathing creature now lives permanently in the airport terminal.

The fans of the trilogy were chosen from more than 140,000 entries received worldwide.

One of the winners, Tania Bradna from California, could not believe she was in the city and country where the film was made.

"It's been a fantasy, I keep thinking I'm the biggest Hobbit fan but then I meet others that know things that I don't," she said.

"It's so cool to be in a place where everyone is so passionate and are running around New Zealand like a bunch of crazy people."

The Hobbit fans are trekking across the country to visit the film set sites of the trilogy, including the Hobbiton movie set near Matamata, and Queenstown, where many battle scenes were shot. 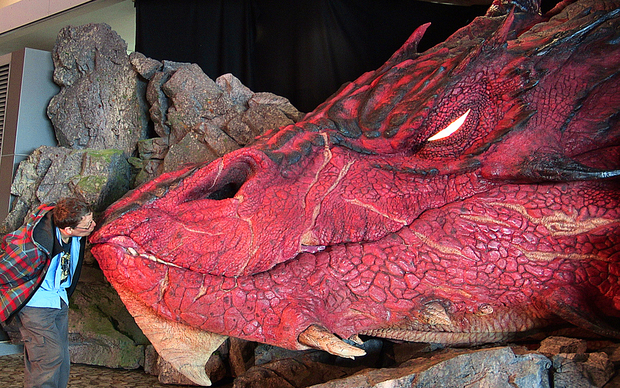 In the lead-up to last night's exclusive screening, the group went to Weta Workshop to view post-production facilities, where much of the magic seen on the big screen is produced.

Another competition winner, Lisa Stole from Germany, was such a big fan of the story by JRR Tolkien that she underwent a quick Weta Workshop operation to get prosthetic Hobbit ears.

"It's been my entire life, the first book I ever read, which has been accompanying me during my adulthood," she said.

Many of the Hobbit fans told Radio New Zealand News they would be lost when the trilogy was over - a sentiment Weta Workshop's Sir Richard Taylor could relate to. He said the movies had been a massive part of his life.

"I've always seen doing these films as our Everest in many ways, with the need at every step to do everything as thoroughly and enthusiastically as we can, in tribute to the writing and the hundreds of millions of people around the world that deserve to see their beloved books deliver in film at the best possible level."

The competition winners watched the uncut version of the final part of the trilogy with director Sir Peter Jackson at his Miramar headquarters last night.

They were under strict instruction not to discuss the movie with media.

'Kiwi stories' on the cards

Sir Peter described the final episode as a thriller and admitted that he was exhausted.

"This is right at the point where we have about two weeks to finish the film off, and I'm doing 22 hours work a day with about two hours sleep," he said.

"It's pretty full on and I'll be delighted when it's finished, I can tell you that.

The official international release of The Hobbit: The Battle of the Five Armies is 17 December.

Once the Hobbit trilogy is finally over, Sir Peter Jackson said he would turn his attention to a possible classic war movie remake and other films made in New Zealand.

"The Dambusters is certainly on the cards, but one thing we are keen to do is return to Kiwi stories," he said.

"Heavenly Creatures was over 20 years ago now."

Tourism New Zealand has estimated coverage by the 40 international journalists who were part of the Hobbit Fan Fellowship visit to New Zealand would generate up to $8 million.