Health officials have urged the Government to phase in national screening for bowel cancer or limit coverage to help manage major obstacles.

The advice is contained in documents released to Radio New Zealand under the Official Information Act. 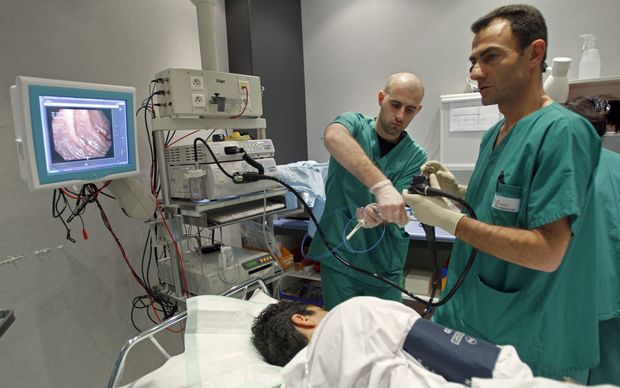 A doctor performs a colonoscopy on a patient at a hospital in France. In New Zealand, demand for the procedure that looks for bowel cancer continues to outstrip supply. Photo: REUTERS

Bowel cancer is the second most common cancer in New Zealand and there is growing demand for national screening. Officials say new cases are expected to increase by 15 percent for men and by 19 percent for women from 2006 to 2016.

They also say current demand for colonoscopies - the main diagnostic test used for bowel cancer - continues to outstrip supply. A total of 39,523 colonoscopies were needed last year to check for symptoms of bowel cancer but just 30,000 were able to be provided at public hospitals.

Officials say there is expected to be a similar increase in demand for the procedures until 2026 and this would be added to once national screening gets the green light from the Government. 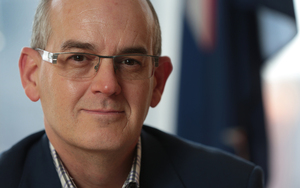 Officials told former Health Minister Tony Ryall: "Waiting time indicators for urgent colonoscopies in DHBs (district health boards) are improving but nationally the targets are not being reached. There is little movement in the non-urgent waiting times with the national average being below the 50 percent indicator whereby people accepted for a non-urgent colonoscopy receive their procedure within six weeks."

They said the main constraint to delivering more colonoscopies was insufficient suitably qualified clinicians in the public sector.

A report to Mr Ryall in September last year said it was not known how many colonoscopies were delivered in 2012-13 in the private sector.

"If a bowel screening programme was implemented nationally we anticipate an increase of 23,235 colonoscopies within the first year of the programme (assuming no phasing-in period)."

Decision on national screening a year away

The Government in its last term said a decision on national screening would be made after a pilot screening programme at the Waitemata district health board is completed at the end of 2015.

New Ministry of Health data from the four-year pilot shows that more than 164 people who have taken part in the pilot have been found to have cancer. The ministry says most were found at an early stage when they can often be cured. 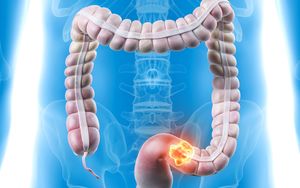 The age range screened under the pilot is 50 to 74. The documents said this could be altered under national screening. They also said the positivity rate of a key test used to assess who should be invited for a colonoscopy could be changed.

A report said the lead-in time needed for national screening would be a minimum of two to three years.

"This would enable DHBs to plan for colonoscopy capacity and implementation of an agreed service model and IT system. There will be differences in lead-in times between DHBs; a longer period of time would be required to enable all DHBs to be at full capacity, especially when it related to the endoscopy workforce."

More gastroenterologists and general surgeons would be needed to do the bulk of the colonoscopies. Training numbers had been increased, and an advisory group set up to guide the expanding role of nurses in carrying out less complex colonoscopies.

Officials added that Britain's National Health Service phased in national screening from July 2006. "The NHS had a phased approach to rolling out bowel screening nationally as it was likely to be more achievable and appropriate than a full roll-out from the start ... we would recommend a similar roll-out to that of the NHS."

Labour Party health spokesperson Annette King is calling on the Government to bring forward a decision on national screening, saying it would save lives.

The advice to wait until the pilot programme ended in December next year was a reflection of delaying tactics by Mr Ryall, she said.

"I'm hopeful that this minister, with his background, will understand what the medical experts are saying to him.

"But more than that, would want to put at the top of his list in terms of funding and projects a screening programme that could save the lives of New Zealanders."

A national rollout would need to be done in a phased way, Ms King said.