A New Zealander heading to Sierra Leone to lead the fight against Ebola says New Zealand could be doing more to help - with similar comments made by doctors about Australia. 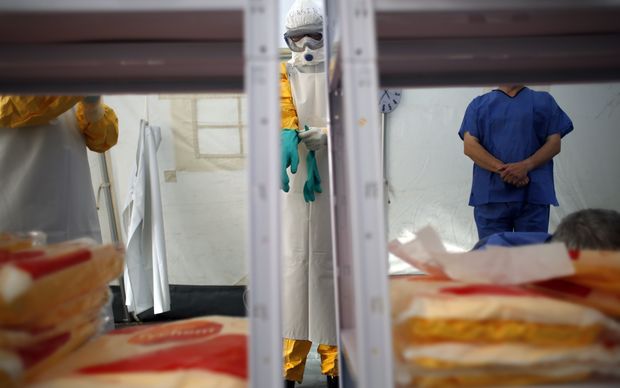 A worker adjusts her gloves as she learns to put on her protective suit during an Ebola training session in Spain. Photo: REUTERS

Northland's Medical Officer of Health, Clair Mills, is going to Sierra Leone for three months on a mission with Medecins Sans Frontieres.

Dr Mills said there were not enough resources to cure patients and prevent the spread of the disease in west Africa.

"Greater commitment to human resources, supporting training of those resources and supporting the structures that need to be in place to manage not just the treatment of patients but also to prevent infection, probably food aid and things like that, because obviously a lot of their economy is affected as well."

She said the Government should consider a more co-ordinated effort.

About 5000 people have died in west Africa this year to Ebola, with most cases of infection occurring in Liberia, Sierra Leone and Guinea.

Doctors have said Australia's government is running out of excuses for not sending practical help - rather than just money - to combat the epidemic, the ABC reported.

The Australian embassy in Washington is reported to have received a request for the Abbott Government to build three field hospitals in west Africa and to send at least 100 health workers to staff them.

The US also wanted an extra $30 million for the UN Ebola fund and provision of helicopters, vehicles and emergency communications equipment.

"What it says is that there are no more excuses in terms of whether Australia should act on this. There's been a lot of attention on the domestic politics but all that can easily be solved if we actually solve the problem in west Africa."

In the US, a handful of states have imposed mandatory quarantines on health workers who treat Ebola patients in Liberia, Sierra Leone and Guinea.

But the UN envoy on Ebola, Dr David Nabarro, said the measures were not scientifically based and he was wary they could deter workers from going.

"We really don't want to jeopardise the effort to mobilise health workers. We don't want them feeling that they will be made unwelcome in their countries of origin when they return."