A major pest-control operation is now complete on the West Coast, in time to lend extra protection to nesting native birds. 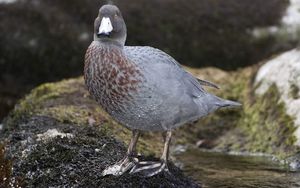 The 1080 drop aims to help vulnerable populations such as the blue duck. Photo: PHOTO NZ

The Department of Conservation has dropped 1080 poison pellets over 81,000 hectares in the Maruia Valley and surrounding areas to protect vulnerable populations of birds and other wildlife.

He said the timing was important to get the high rat population down in particular.