It's funny how the political language changes after an election. What was not a problem before voters went to the polls suddenly becomes a challenge once a government is re-elected. 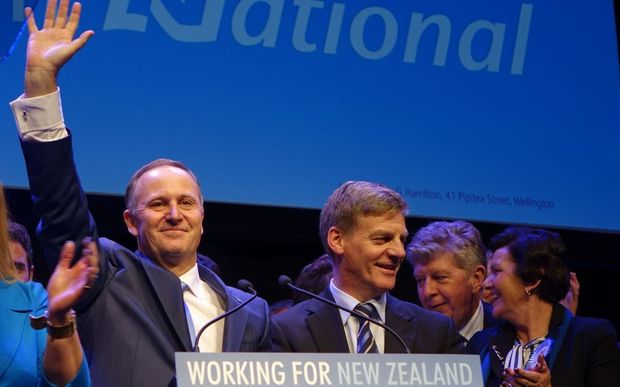 John Key and Bill English at the beginning of the campaign. Photo: RNZ

Getting back to surplus this financial year was not too much of a problem before the election. Now it is. Child poverty was not as bad as some advocates claimed during the campaign, but now the Government is making it a priority.

When the National-led Government opened its books before last month's election it remained confident its Budget would be in surplus this financial year.

The pre-election economic and fiscal update forecast a surplus of $297 million for the year ended 30 June 2015. The Treasury forecast, as usual, contained caveats - but there was no concession by National that it would fail to meet its promise of getting the books back into surplus in 2014-15.

Getting to surplus has become an article of faith for the Government as a demonstration of its financial management.

Indeed Prime Minister John Key kept repeating that National had already got the books into surplus, even though it did not have the cash in its back pocket. Now, just weeks later, it looks as if the Government will not get that cash even in this financial year.

And what was a pre-election promise has now become just a forecast.

Finance Minister Bill English is now warning that getting back into surplus remains a significant challenge. To be fair to Mr English, he has never been as upbeat about the surplus as Mr Key, but he has nonetheless toed the party line.

Any voter who went into polling booths on 20 September would have done so in the expectation National would return a surplus this financial year. National continued to make that promise even when falling dairy prices - and they fell well before the election - started to raise questions about whether the surplus could be achieved as the tax take falls below expectations.

Despite that, the Government remained adamant it was on track to return a surplus. Its rhetoric has now changed with the release of the financial statements for the financial year ended 30 June 2014.

But it had to warn finally that while the books are moving in the right direction, they might not now get into surplus next year. 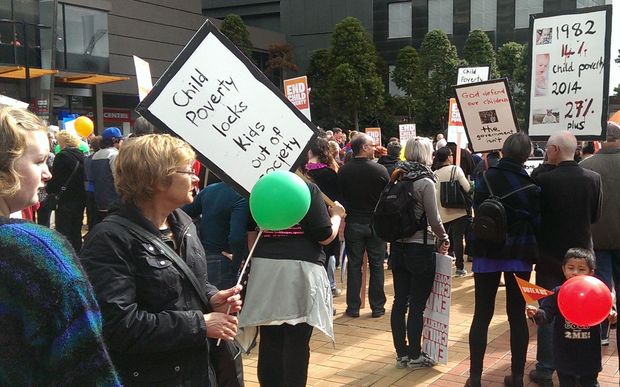 In Auckland, about 1000 people took part in a march against child poverty just over a week before the election. Photo: RNZ / Nicole Pryor

Extraordinarily, he laid much of the blame for poverty on local authorities. He said by not freeing up enough land for development local authorities helped push up house prices, making life tougher for low and middle income households.

Mr English's comments follow on from a commitment John Key made after the election to deal with child poverty.

Mr Key's statement drew support from Business New Zealand, which congratulated the Prime Minister for prioritising the issue of child poverty and it said business would support the Government's efforts to tackle the problem.

When child poverty was raised by the Child Poverty Action Group during the election campaign the Government dismissed many of its concerns. And certainly Business New Zealand did not put out any statements congratulating other political parties, such as the Greens, Labour or Mana for making child poverty a priority.

Now that the votes have been counted, the language is changing.

The question, though, is how will the Government respond? Its new ministers have been sworn in and in just under two weeks John Key will deliver his Prime Ministerial statement to Parliament. That will set out the Government's agenda for this parliamentary term and give further indication of just how seriously it takes child poverty.

It might also spell out whether the Government will make further cuts to reach its surplus target or signal it is comfortable with breaking that promise in the expectation it will get there the year after.