The United Nations is launching an appeal to New Zealanders for financial support for children affected by the fatal disease Ebola. 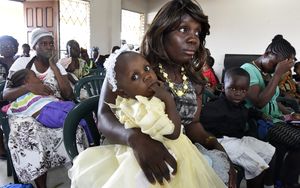 Women and children attending a mass in Monrovia for Ebola victims last month. Liberia's capital has been the hardest hit. Photo: AFP

The World Health Organisation says the epidemic has killed almost 4000 people in West African countries and continues to spread.

The head of the UN Children Fund of New Zealand, Vivien Maidaborn, said the concern is for the thousands of children infected with the virus each day and those whose parents have died or are ill.

Ms Maidaborn said some children who have lost their parents are treated as outcasts by their family or community for fear they might pass on the virus.

It is estimated more than 3500 children have been orphaned, she said.