Norwegian oil giant Statoil is considering going further into New Zealand. The company at present has a concession to investigate conditions off the Northland coast.

Vice-president in charge of exploration Nils Telnaes has been in the country to attend an energy conference in Auckland. 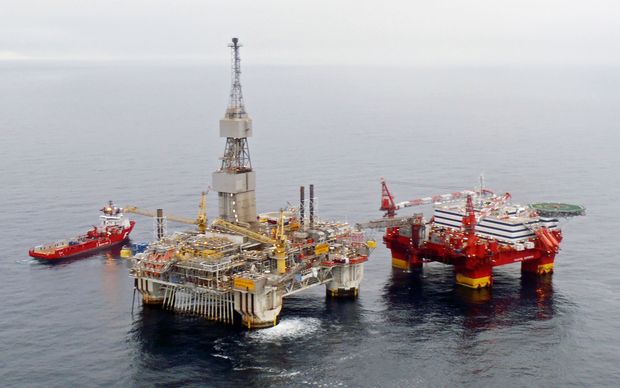 One of Statoil's rigs off the coast of Norway. Photo: AFP / Statoil / Floatel

Statoil's exploration off Northland is just beginning and the earliest time any oil wells could be in production would be 2021.

Despite this drawn-out process, he is considering adding other parts of New Zealand to his company's portfolio.

"There's more than 400,000 square kilometres of acreage being available in the upcoming licensing round and we're taking a keen interest in that, and we are considering a bid for new licences."

The oil fields being looked at now are at a water depth of 2000 metres and protesters at the conference alleged that this poses an unacceptable environmental risk.

But Mr Telnaes said it is not a problem.

"This is definitely harsh conditions, but it's nothing that we're not used to from Norway. We're operating in a very similar environment as offshore Norway. We've drilled more than 1000 wells in Norway without any serious incidents and damage to the environment and we're confident that we can do this."

Confirmation of Statoil's extended interest will come when the next tendering round for interested companies is make public later this year.

The energy conference in Auckland has been told that fossil fuels will continue to dominate world energy needs for decades to come.

Environmentalists say they contribute to climate change by increasing carbon dioxide emissions. Many governments have sought to discourage this by pushing for the use of renewable energy.

But Neil Gilmour, a senior gas executive for Shell International, said today that the percentage of renewables would slightly more than double by 2050 - leaving fossil fuels still very much in charge.

"If globally renewables could perhaps meet 30 percent of the world's energy needs by 2050 and perhaps 10 percent of the rest is made up by nuclear, it still leaves 60 percent reliant on fossil fuels. And because of that lag ... to change the energy system, hydrocarbons are going to be front and centre for many, many decades."

Mr Gilmour's comments contrast with a recent report by the International Energy Agency which forecast a strong future for solar energy.