More than a hundred people turned out to two different memorial services in Ashburton last night to pay their respects to the two women who were shot dead in Ashburton on Monday. 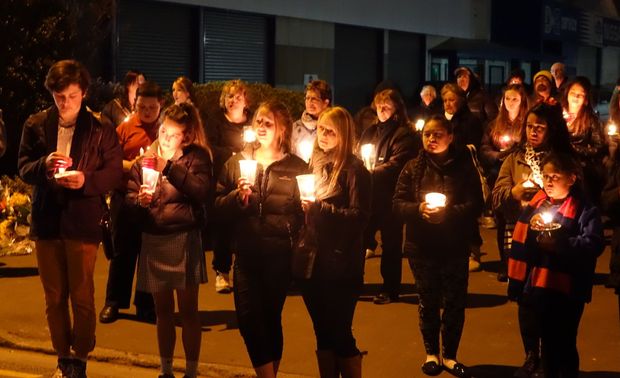 A candle-lit vigil for the victims of Monday's shootings. Photo: RNZ / Jemma Brackebush

The Thursday night members of the Ashburton RSA observed a minute's silence and people attended an candle-lit ceremony at the scene of the shootings.

The usual hundred or so people turned out to the Ashburton RSA last night, but just before 6pm the room stood for a minute's silence to pay tribute to Peggy Noble who was a Thursday night regular.

"Tonight we remember the tragic events that have happened this week and offer our condolences to the victims, especially Peggy Noble who was a loyal and regular member to club night on Thursdays."

On Peggy Noble's table sat a vase of fresh flowers, her friends and long time partner Don turned out to pay tribute to the lady they described as bubbly, friendly and willing to help anyone.

Friend Peter Horsburgh said they sat at the same table for about six years and it only felt right to go along in Peg's honour.

"Mum was a bit worried about coming up here and I said to her look we've got to go up. I said it would just be odd if no one was at this table.

I feel that out of respect for Peg we should still front up at the table. She'll be looking down on us, wanting us to be at the table, doing the raffles."

A friend of 20 years, Helen, says Peg would help anyone in need.

"She always sat beside me and we'd go out for our ciggie, back in, and then she'd have a wee game on the pokies".

"Her birthday is on December 12, she would have been 68. She hasn't seen that and I'm going to miss her, miss everything, she was a very good person."

I feel that out of respect for Peg we should still front up at the table. She'll be looking down on us, wanting us to be at the table, doing the raffles 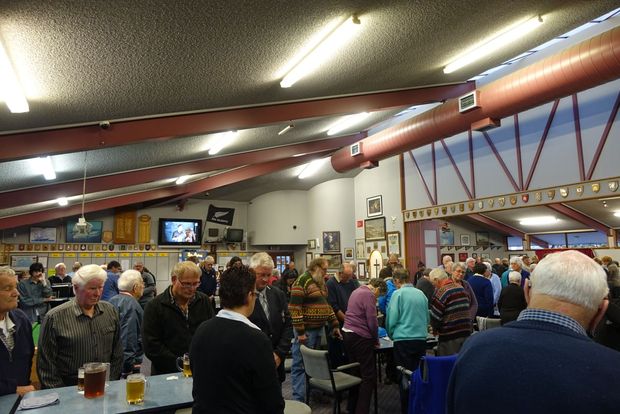 A moment's silence is observed at the Ashburton RSA. Photo: RNZ / Jemma Brackebush

At about 8pm a large crowd gathered at the edge of the police cordon for a candle-lit ceremony.

Throughout the emotional gathering people performed songs and shared stories about the impact Peggy Noble and Leigh Cleveland had had on their lives.

Violet Simon introduced herself to the crowd and shared her story.

"Peggy, she actually helped me through a lot. Suicidal and everything actually. I used to call her Nan. She used to growl at me a lot, tell me to take my hat off every time I went into WINZ, to tuck my shirt in".

She told the crowd Peggy encouraged her to keep singing.

Many people spoke and paid tribute to all three victims.

While people were visibly upset and comforting each other, outbursts of laughter would break through people's grief and lighten the atmosphere at times, as people reflected on humorous stories.

People raised their candles in the air as the final song, Hallelujah by Leonard Cohan, played.

I used to call her Nan. She used to growl at me a lot, tell me to take my hat off every time I went into WINZ, to tuck my shirt in 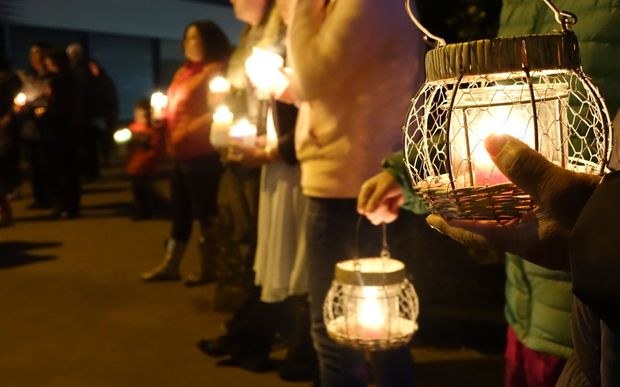 The cordon is still in place around Cass and Moore Streets and a big blue tent remains outside the Work and Income office as police investigations into the shootings continue.

An Ashburton District Council spokesperson said the planning of a civic ceremony was underway and was likely to be held towards the end of next week.