Two people were killed and another seriously injured with a shotgun at the town's Work and Income office just after 10am this morning.

"As you can imagine, all resources are going into looking after the staff there...so we just have an extreme situation and tragedy on our hands," she said.

Prime Minister John Key said he was shocked and dismayed by events in Ashburton.

The Prime Minister said the safety of frontline Work and Income staff was taken very seriously and that there will be a review of security measures.

"Every day New Zealanders get up in the morning to go to work or to visit Government departments and their families expect them to return home, in this case that has not happened and my thoughts are with the loved ones who have lost, and those who have lost their lives."

A security guard is located at all Work and Income offices.

Victim Support was on site working with clients and staff affected by the events in Ashburton.

The Ministry of Social Development confirmed the victims were all Work and Income employees.

The ministry released this statement to the media: 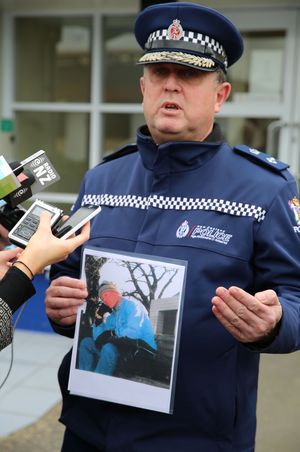 Superintendent Gary Knowles with a picture of the suspect, John Tully. Photo: RNZ

We are all devastated by the deaths of two of our colleagues in the shocking attack at the Ashburton Work and Income office.

Our deepest sympathies are with their families, friends and workmates.

A third staff member is in a critical condition in hospital and our thoughts and prayers are also with them.

Their families and our colleagues will need time and space to deal with this tragedy. We will be there for them. We ask that media respect their need for privacy.

The Police are handling this unfolding situation.

We have security protocols on place at all sites. Obviously we will be looking at what else might be needed in these extreme situations.

We have closed all Ministry of Social Development offices in Ashburton, Timaru, Oamaru, Christchurch and Balclutha in the wake of the attack. The Dunedin offices are open for emergency appointments. That will continue until further notice.

In a separate incident we have also closed our New Plymouth office and this will reopen as soon as possible.

People requiring assistance at those sites please call the Contact Centre at 0800 559 009.

Ashburton Mayor Angus McKay said the council offices, which are near the Work and Income office, had been put into lockdown.

"I'm very disturbed about such a thing happening in the town of Ashburton. I feel for the people involved, the close families and the work mates.

"It's terrible for the families and workers involved. My heart goes out to those people."

The Public Service Association said today's shooting was a tragedy.

The union's national secretary Richard Wagstaff said it was not acceptable that people did not come home safely from a days work.

He said the situation today in the Ashburton office was a rare occurence but did highlight the potential dangers some public servants faced.

Shooter may have asked Government minister for help

A spokesperson for New Zealand First leader Winston Peters said Russell John Tully emailed the party on 14 August about the difficulty he was having trying to find somewhere to live.

She said the email showed he also contacted Social Development Minister, Paula Bennett, the office of the Speaker, and Transport and Earthquake Recovery Minister Gerry Brownlee.

Ms Goodhew said while Mr Tully approached her office about getting a house, she had never met him.