A senior Earthquake Commission engineer has told a disciplinary hearing into his professional conduct that sometimes, people just don't want to hear what he has to say.

Graeme Robinson is before a Chartered Professional Engineers disciplinary hearing in Christchurch today over complaints regarding his conduct and assessments of quake damage to 11 properties. 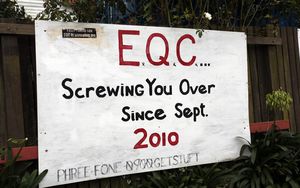 All of the complainants that have come before the panel today have reported that Mr Robinson treated them rudely and aggressively. One couple said he showed no care for them as human beings.

The first of the complainants, Scottish couple Michael and Fiona Tierney, said Mr Robinson's assessment of their 1895 red brick home, which was damaged in the September 2010 earthquake, found that all its damage was pre-existing.

The Tierneys complained about Mr Robinson's conduct towards them, as well as his finding that the quake had not made their house any more unsafe. He had been rude and abrupt to them, and had showed no care for them as human beings, they said.

"I'm afraid at one point I just shut off. I thought, 'There's not any point talking to him'. It got to that bad," Mrs Tierney told the hearing. "We were asking questions and pointing out things, and he started getting louder and louder."

The Selwyn District Council had told the couple their house was uninhabitable and they had been living at the Burnham military camp for the past six months. Before that, they lived in a caravan for three-and-a-half years.

Mrs Tierney said all they wanted was an honest appraisal of their home so they could get it repaired and move back in.

Graeme Robinson told the panel he categorically denies some of the allegations. He said professional engineers have a duty to treat people with regard and respect - and he always does his best to do that, but there are times when the message is not nice and is not well received.

He said he has never behaved with anything other than respect and propriety. He said he was forceful, direct and honest with people - but not inappropriate.

Mr Robinson told the panel that he objects morally and ethically to any innuendo that his job is to cut costs for the EQC.

His lawyer, John Morrison, told the hearing that much of the evidence the hearing was relying on was mischievous and irrelevant.

Mr Morrison said Mr Robinson had been the subject to a public campaign of vilification against him, and much of the information in the 2700 pages of material provided to the panel was of no probative value.

As well, the panel did not have the appropriate jurisdiction to be sitting today, he said.

Before the hearing, Stephen Bell told Radio New Zealand he and his partner had had an apology from EQC after their experience with the Government-run insurer.

He said Mr Robinson claimed that a severe lean on the upper level of his home was pre-existing and not earthquake-related.

The delays caused by Mr Robinson's assessment of their property meant they were still living in their garage waiting for their home to be rebuilt.

Mr Bell said they had hit rock bottom and had had to seek professional help to deal with the stress their living situation has caused them.

No one from EQC was willing to comment ahead of today's hearing. However, in a statement it said Mr Robinson continues to work for it, including peer reviewing engineering reports and training assessment teams.

The Institution of Professional Engineers was also unwilling to talk ahead of the hearing.