Net migration in April was the second highest monthly level on record, due to fewer New Zealanders moving abroad and more people wanting to live here. 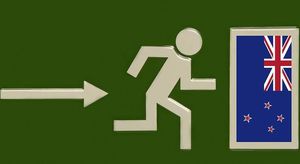 Official figures show a seasonally adjusted net gain of 4100 people in April - the biggest gain since February 2003, when a large number of overseas students pushed up the monthly total to 4700.

On an annual basis, there was a net gain of 34,000 permanent and long-term migrants, well above the long-term average of nearly 12,000 during the past 20 years.

However, it is also expected to put more pressure on the housing markets in Auckland and Christchurch.

Last week, the Treasury warned the rising number of migrants could put additional pressure on the housing market.

Labour said the Government had failed to keep immigration in check but Prime Minister John Key dismissed that and said there was no crisis.

Westpac economist Felix Delbruck said migration numbers would continue to climb until the end of the year but would slow down once the Australian economy picked up.

"It's probably going to turn in subsequent years as the Australian economy continues to recover and as the New Zealand economy eventually enters a downturn once the Canterbury rebuild peaks," Mr Delbruck said.

"So it's very strong numbers - but they're not going to last forever."