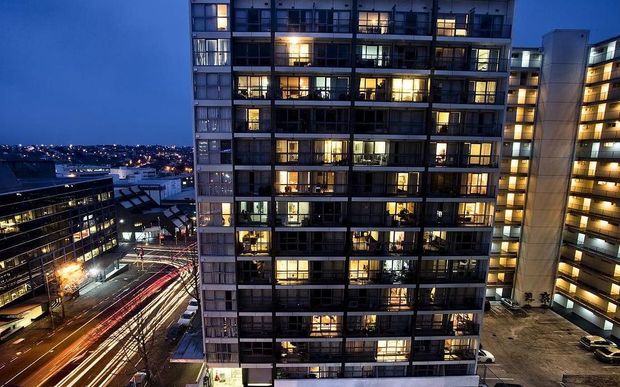 Police carrying out a raid looking for methamphetamine in Wellington's Chews Lane apartment building on Friday stumbled on what appeared to be a drug-making laboratory.

National chair of body corporate chairs Neil Cooper says apart from the danger of fire, explosion and chemical contamination associated with a drug lab in a high rise urban building, responsibility for paying to clean up the site is complex.

He says a body corporate may pay for decontamination in the first instance, but the cost would likely be passed on to the individual owner of the unit.

"I personally would be horrified at the idea that the body corporates would have to pick up, what could be the quite considerable, costs of de-contamination."

He says de-contamination in an apartment complex is inevitably more complicated as contamination could spread much more easily from one apartment to another.

Mr Cooper says the P lab discovery in Wellington puts the onus on people who rent property to be vigilant.

"It really comes down to, if you're renting an apartment or a house you have to have good management of it. Someone's got to go there regularly to check it out."

He says if that is happening on a regular basis it's unlikely a P lab will last very long.

The body corporate of Chews Lane Building will be meet to discuss the safety and insurance implications after the discovery of the alleged methamphetamine lab.

As a result of the police raid, four people have been charged with possessing a Class A drug for the purposes of supply and two remain in police custody.

Police say tens of thousands of dollars in cash was found in the unit, as well as more than 40 grams of ready-to-sell methamphetamine.

But, he says once a police report has been received, the body corporate can determine what went on and whether there is any need for fumigation.