Prince Charles and the Duchess of Cornwall have arrived in New Zealand for a six-day visit marking the Queen's Diamond Jubilee.

The Royal couple flew from Australia to the Air Force base at Whenuapai on Saturday evening and were welcome by Prime Minister John Key and his wife Bronagh.

The Prince and Duchess stepped off the plane to the sound of the airforce brass band at the start of a tour which will take them to Auckland, Wellington, Feilding and Christchurch.

The couple will receive a traditional maori welcome on Sunday at the Auckland War Memorial Museum. 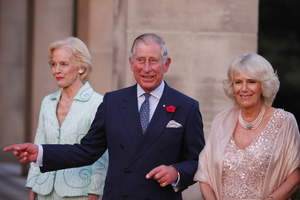 Later in their trip they will open a new visitor centre at Government House in Wellington - New Zealand's Diamond Jubilee gift to the Queen. Among other engagements in the capital is a visit to Weta Workshop.

The Royal couple will tour earthquake damaged parts of Christchurch and attend an Armistice Day commemoration.

In Sydney on Friday, Charles and Camilla took in the sights of the Opera House, Sydney Harbour and Bondi beach and visited Government House and Admiralty House.

They mingled with well-known Australians including fashionistas, footballers and influential females, but the day also brought unscripted moments like a flash thunderstorm and a fainting military policeman, AAP reports.

Prince Charles rolled his eyes in disappointment when the heavens opened at Bondi, forcing him to cut short a meet-and-greet session with emergency services officers.

At Sydney's historic Victoria Barracks a short time earlier, a military policeman fainted in the high heat and humidity during a parade in which Charles' wife Camilla was appointed colonel-in-chief of Australia's military police.

The Prince of Wales and the Duchess of Cornwall wound up their visit to Australia on Saturday with a day in the nation's capital.

Prince Charles and Camilla also attended the opening of a terrace on the edge of Lake Burley Griffin in Canberra, named in honour of Queen Elizabeth II on her Diamond Jubilee.