Incumbent Wellington Mayor Celia Wade-Brown has won a mandate to lead the city for the next three years. 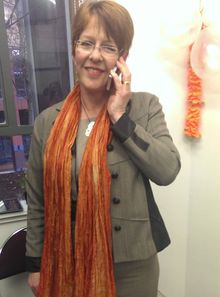 Ms Wade-Brown fought off a challenge by councillor John Morrison by more than 2000 votes to win a second term.

Ms Wade-Brown said the main focus for the next three years would be improving cycleways in the city and boosting the economy.

"The first thing is to talk to all the elected councillors, and I think it's going to be very close for some of them," she said.

"It's really important that we get things moving fast ... we'll be announcing some great programmes and projects."

She says design and information technology firms will flourish in the city and says she is committed to introducing a living wage for council workers.

Mr Morrison said he had not made any plans for the future.

"Obviously I was focussing on the mayoralty. That hasn't happened. I accept that. That's democracy," he said.

"We'll get on with it and I wish Wellington well."

She is one of four sitting mayors to be re-elected in the Wellington region.

In Porirua, Nick Leggett will take up a second term as mayor, in Hutt City Ray Wallace garnered almost seven times as many votes as his closed rival with 98% of votes counted and in Upper Hutt Wayne Guppy is expected to win re-election by a landslide, based on preliminary results.

Fran Wilde, who chaired the council last term, has been re-elected.

Lyn Patterson is set to replace Garry Daniell as mayor of Masterton. With 98% of votes counted. Ms Patterson has 2839 votes compared with Mr Daniell 2542 votes. The other contender, Gary Caffell, has 2165 votes.

Long time mayor of South Wairarapa is back for another term. Adrienne Staples has had the job for nine years and was elected uncontested

Former MP Ron Mark has been re-elected unopposed as mayor of Carterton. The elected council also has two new faces including Greg Lane and Mike Ashby

Ross Church who has been on the council for one term is Kapiti's new mayor beating Jenny Rowan. Ms Rowan held the job for two terms and was seeking a third.

Mr Church has lived on the Kapiti coast for 33 years, is a tutor in business and a owns a classic car business.