Some returning officers have reported a last-minute rush of voting before voting in the local government elections closed.

In Auckland, just a third of people had cast their votes in the postal ballot by Friday night, compared with 48% in the 2010 poll.

At one of the city's main ballot centres, the Central City Library, people were seen running to get their votes before the noon deadline. 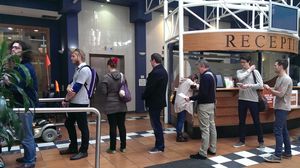 In Wellington, in the build-up to the midday cut off, a steady stream of people came into council ballot box centres, some because they said they had not received ballot papers through the mail.

Electoral officer Charlie Inggs says voter returns from the postal ballot are slightly higher than the 2010 election, and he is expecting to reach a total return of more than 40%.

"I don't think we'll get anything more through the mail but just the votes that were coming in this morning and the ones we're going to collect from all our 11 branch libraries ... I think we are pretty confident we'll get to just over 40%, which is the highest it's been for several elections."

Mr Inggs said there was steady stream of people going to council centres all Saturday morning, and the last minute voting appeared to come down to a strong mayoral race and people waiting to make up their minds.

The number of papers returned in Hamilton was at 34% on Friday, on par with the last election.

In Christchurch just a week ago only 25% had voted in a mayoral race considered by many to be already won by former Labour MP Lianne Dalziel.

Returning officer Clare Sullivan says the number voting is likely to be less than in the last election, but higher than the two before. "We're currently sitting at 40.54% and I'm hoping that we get at least 3% in the mail today, or people dropping them off at service centres and libraries today."

Progress results are expected from some centres about 2pm and provisional results by 7pm. The full vote count, including special votes, will be released on Wednesday.