A mayor who accused a community group of defamation and sought $10,000 in legal fees has dropped the case after the offending flyer was removed from social media. 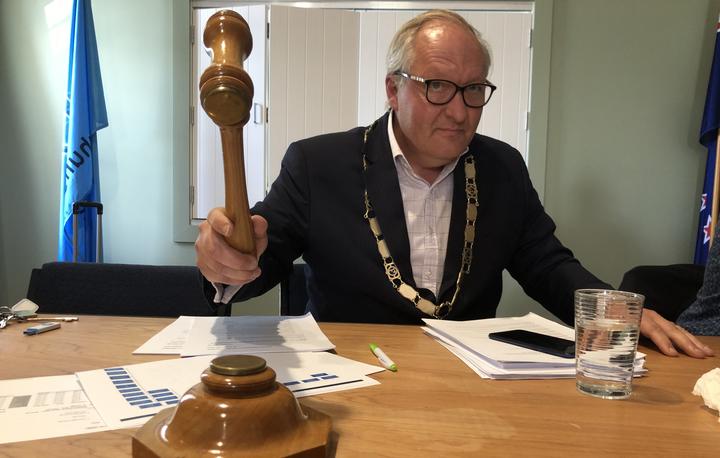 South Wairarapa mayor Alex Beijen traded legal blows with the Wairarapa Future group earlier this year after they called into question his relationship with the owner of a company applying for consent to crush rock at a Featherston quarry.

The group claimed in a Facebook flyer promoting a meeting raising concerns about the resource consent application that the council denied the mayor had a conflict of interest.

The businessman in charge of the company PJ Warren Ltd, Peter Warren, is related to Beijen's wife.

In August 2020, Greater Wellington Regional Council granted a 10-year consent to PJ Warren to extract aggregate from land near Underhill Rd, 3kms from the town centre.

The company then applied to South Wairarapa District Council (SWDC) to set up rock crushing on the site, but that application was put on hold in November after a public outcry.

In March following publication of the "Stop the Quarry. Act Now" flyer, Beijen engaged lawyers who demanded the group publish a correction and pay their client's legal fees and ancillary costs incurred by their "defamatory statements", of $10,000 plus GST, according to the letter seen by Local Democracy Reporting.

Beijen's lawyers wrote that the group effectively alleged that SWDC wrongly attempted to cover up a familial relationship and was then later forced to admit such a relationship. The lawyers said Beijen was not related to Warren by blood, and was not a friend or associate.

The lawyers also said the quarry consent was granted by Greater Wellington Regional Council, removing any possibility of conflict of interest.

The group hit back with a lawyer's letter of their own stating the sentence in question was not defamatory and that Beijen would struggle to prove otherwise.

The letter pointed out that the council had initially denied a conflict of interest with PJ Warren and later recorded one, and that Beijen's own lawyers confirmed he was related to Warren.

However they offered to publish a correction.

In a second letter in April, Beijen's lawyers lowered the payment demand to $7500 before dropping it altogether after the flyer was removed from the group's Facebook page.

"If we didn't comply, the threat of legal action would follow," he said.

"As constituents and ratepayers we would have expected a request to 'cease and desist' if we had done something wrong as opposed to what we can only describe as demands and threats.

"Everything we did and claimed was verified, backed up, honest and truthful.

"Based on the response to our actions, we were left feeling this was an abuse of office, intended to intimidate. At least, that's how it felt."

Beijen said the matter was personal, and did not involve council in any way, including costs.

"Whilst I tend to ignore lies and misinformation distributed by members of the public, a lie that questions honesty needs to bring the offenders to task," he said.

"This was the intent of my legal letter regarding defaming comments spread about a consent granting process.

"As the letter resulted in the removal of the offending flyer from a website, I felt this was sufficient action to not proceed and have not done so."

The resource consent remains on hold.