When it comes to food in South Auckland, greasy corner store takeaways or brazen fast-food franchises might spring to mind, but three local female entrepreneurs are trying to change that perception. 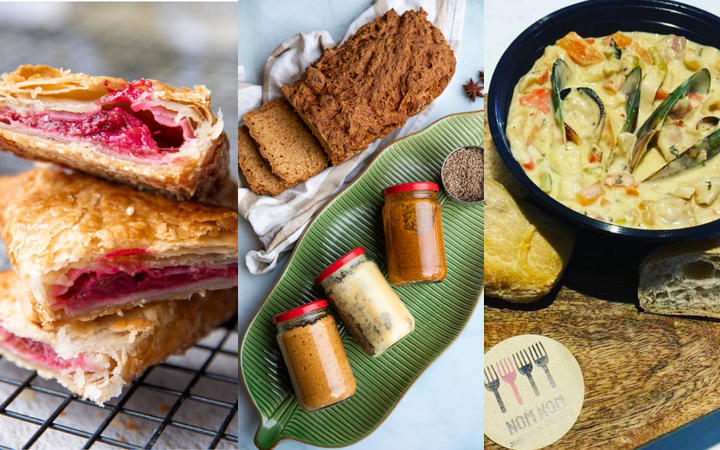 The Kitchen Project is behind a group of new food businesses in South Auckland. Photo: Supplied

The trio is part of a wave of newly established authentically South Auckland food businesses being supported by a council-funded business incubation programme called The Kitchen Project.

Upending stereotypes, however, does not come without some challenges along the way.

From London to Auckland's 'food bowl'

Spurred on by Covid-19, Bryone Vonk decided to leave her job at one of Gordon Ramsey's Michelin-starred London restaurants to start a plant-based pastry business, The Good Baker, back in her hometown of Pukekohe.

She says her time under the famously temperamental celebrity chef honed her skills and thankfully she was never the subject of one of his notorious tirades.

"He was often around. He would come in and shake everybody's hand, but he never swore at us, apart from a waiter who got his coffee order wrong." 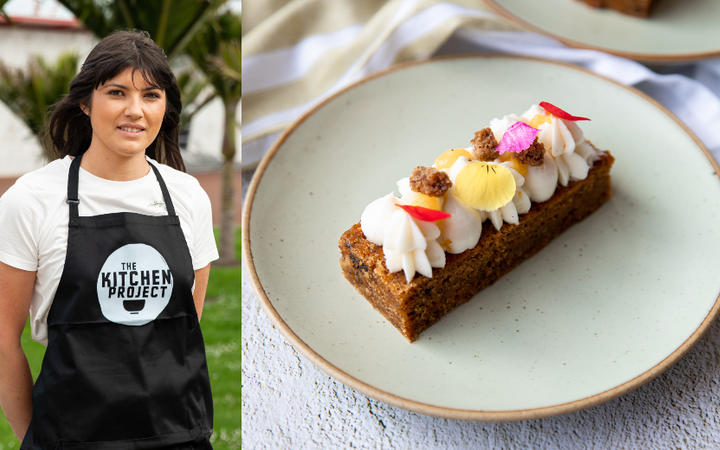 When she returned to New Zealand, she wanted to start her own business but knowing how was another matter.

"Even though I'm qualified as a pastry chef, I really had no idea about the business side of things. So it was extremely beneficial for me to join The Kitchen Project, as it really just gave me the foundations for starting up."

Beyond making delicious pastries, she also wants her baked delights to introduce customers to the benefits of sourcing locally from South Auckland's food bowl and to "show people that plant-based food tastes just as delicious or even better".

Vonk has already got the business to a stage where it's financially viable, but her ultimate goal is to run her own cafe in the area.

"I started at the Oratia and Grey Lynn markets, and now supply to cafes and the New World in Pukekohe. So hopefully I can expand into wholesale and have my own location."

After leaving Mumbai, India, where she ran a catering business with her husband, Perzen Patel decided she wanted to offer Kiwis an alternative to the watered-down curry pastes commonly found in supermarkets.

"It has always been at the back of my mind that I want people to know there's more to Indian food than just butter chicken." 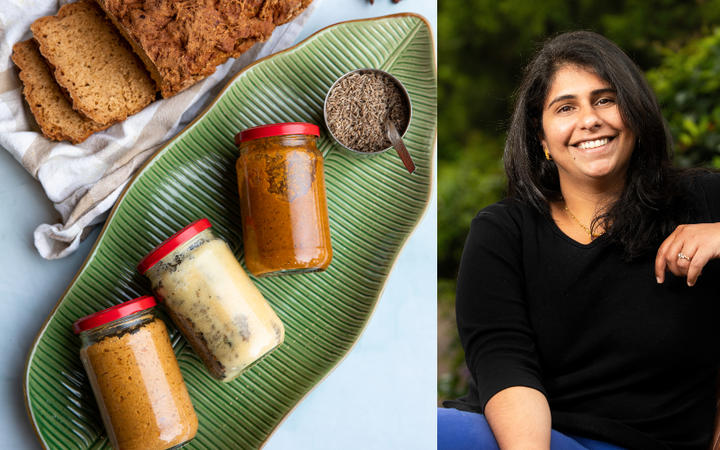 She hopes her Dolly Mumma products not only introduce customers to a wider variety of curry flavours but are also really easy to use.

"Typically when someone wants to cook a curry, you either buy a sauce from the supermarket, or you go it alone, and you get 20 different spices from the Indian shop.

"Hopefully we can be that middle ground. It's a fresh product, not made with preservatives, using my grandmother's recipes, but essentially it's still a paste, so you can just tip and go."

She credits The Kitchen Project with helping her to hone her products as well as being a sounding board.

"I call my business mentor 'my therapist' because I could call her anytime to get help with each and every issue that would arise."

The Takanini resident says another motivation is to show people that South Auckland cuisine is more than what's commonly available.

"So much of the food that's available in our area is fast food or your traditional European fare, and it's not really reflective of the people who live here. I'm really passionate about showing people a real version of Indian food, not just this one version that people have in their minds."

Tuitavake, who was born in Christchurch and raised in Auckland, had been experimenting during the Covid lockdowns with different sauces and recipes to go with the traditional seafood boil up she grew up making with her mum.

"I managed to perfect my own sauce recipe, so I trialled out a few dishes, took photos and sent them to my brother, and he posted them online, without telling me," she says.

"The next morning, he started forwarding messages from people wanting the food. Within 24 hours we had requests for catering gigs, heaps of order requests, and ever since then we haven't been able to keep up with the demand." 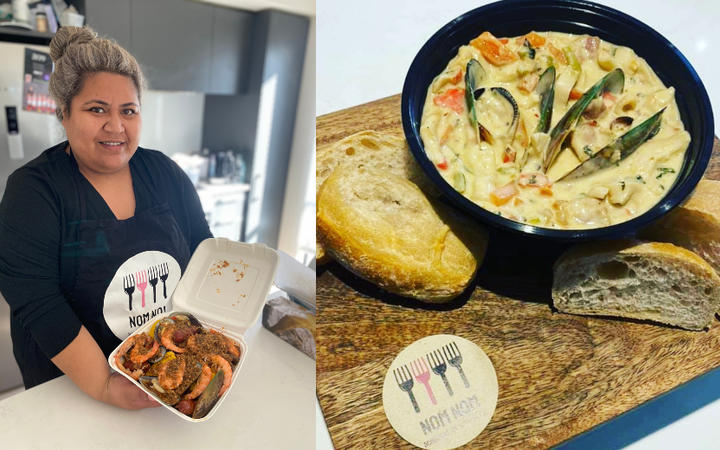 Tuitavake says cooking is in her blood, but she never imagined there would be such demand for her Pacific-infused seafood platters. Since starting in September last year, she's been able to quit her job and is now eyeing up the possibility of opening a restaurant.

"Our home was the hub for all the extended family so we were always cooking and always serving. And I guess our mum instilled in me a love for being hospitable."

The Māngere resident says the enterprise is also about creating something unique in her region, where healthy and nutritious food can be hard to come by.

"I hate what we're served up as a community so it has to change," she says.

"I want to focus on quality over quantity and show our people they can feed their children good wholesome food.

"Also, being an NZ-born Pacific kid, we tend to only go back to the islands for holidays, so I feel this is one way to reconnect to our roots."

She says The Kitchen Project has been instrumental in helping her sharpen her focus.

"We couldn't keep up with the demand and so we had to look at how we could get the right structures in place. The Kitchen Project has been able to connect us to others within the industry who have had some really good advice.

"They've helped me find out my why, so when it gets really hard, that's what I go back to."

The programme itself takes place over six months, with South Auckland participants required to attend an intensive six week series of workshops based at the Vodafone Events Centre's commercial kitchens, which includes training on marketing, accountancy, food compliance and specialist advice from a range of vastly experienced food entrepreneurs.

Eke Panuku programme manager Sreshta Sridhar says while it is a big commitment it has proven to be effective, with the majority of the 38 entrepreneurs who have completed the programme going on to run viable businesses.

"The key really is that it's all about making sure we're preserving people's traditional foods and we're also wanting to bring to the forefront, healthier, more sustainable eating options." 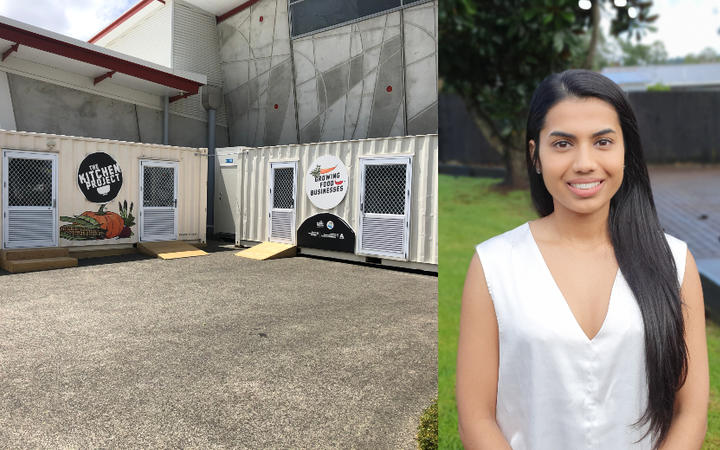 The programme was inspired by a similar project that started in San Francisco helping migrant women get a foothold in the city's highly competitive hospitality industry.

Sridhar says they try to leverage all the support and networks Eke Panuku and Auckland Council have, to ensure their participants have the best chance of success.

"We wrap around as much support as we can, and we introduce them to a variety of opportunities.

"It is so satisfying to see someone go from just an idea or a concept that their friends and family like, to see them grow to where they are now, where they can make their passion their full-time work."