A Rotorua nurse says nurses are terrified about mistakes in patient care due to short staffing and under-resourcing. 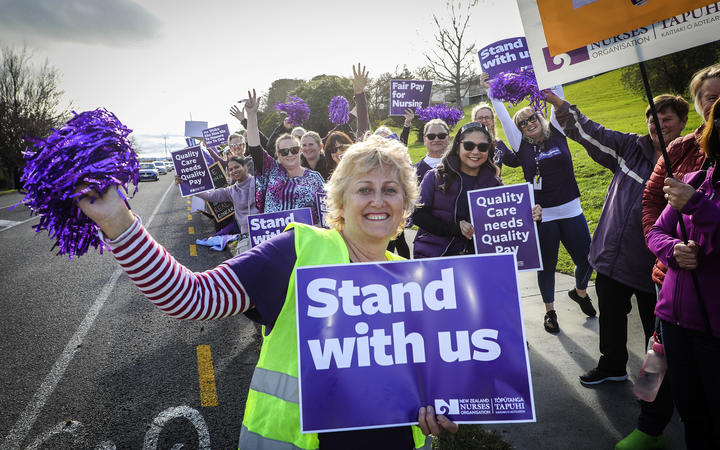 A spokesman for district health boards nationally says almost 3000 additional nurses and midwives were employed in the past three years and there were "a number of staff well-being measures in the DHBs".

Rotorua nurses, midwives and hospital assistants downed tools at 11am sharp, and by midday there were more than 100 strikers and supporters gathered at the picket line on Ranolf St in Rotorua.

"We never finish on time. We stay because we care about our patients.

"You get home and worry about could have, should have, would have.

"We're missing breaks, there's not enough staff on the floor. When we have more staff, we have better outcomes for patients.

"We're all just tired, we're burned out. We're short staffed at the best of times. It's an even worse situation now [due to Covid-19]."

Gray wore a yellow hi-vis vest to the strike, which she had written the word "integrity" on the back of in black marker.

She said integrity was "about doing the right thing even when no one's watching".

"It's about safer staffing and it's about paying us what we're worth. We've been underpaid for years and years as a predominantly female workforce," Gray said.

She said nurses were often going above and beyond, and workplaces were haemorrhaging staff as those staff sought better opportunities overseas.

"I want the government to hear how under pressure we [healthcare workers] are. Look around. We're all old. They're going to retire in the next 10 to 12 years, where's our new lot coming forward?" 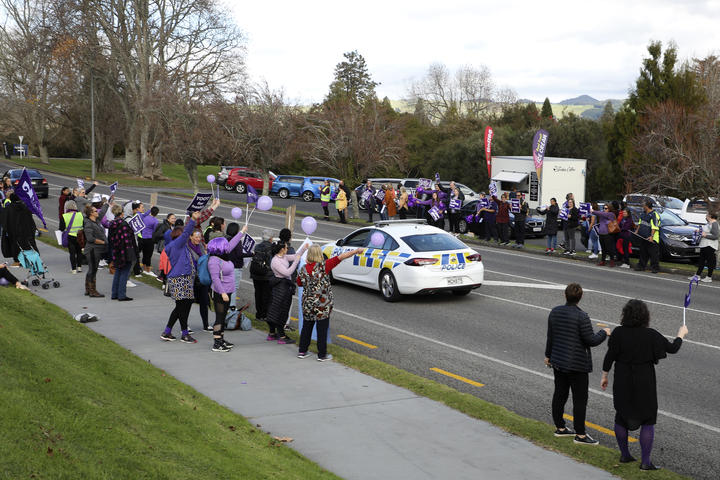 Gray said the government saw nurses as a cost and she believed every dollar spent on healthcare workers saved district health boards money in readmissions and even deaths.

"Nursing is an investment, not a cost."

Some strikers held signs such as "we care for you, care for us", "let's do this" and "safe staffing now".

Rotorua Hospital charge nurse manager Clivena Ngatai said safe staffing was at the core of the strike, as well as a call to pay nurses "properly".

Echoing Gray, she said concerns about the impact on patients due to under-resourcing was a motivating factor for the strike.

"We are practising unsafe."

She said hospitals were getting busier and with sicker patients.

"We're not given the opportunity to care for our patients properly because we're too busy.

"No one wants to strike. We feel like we've been made to."

She did not feel the government was listening to nurses and said staff were being lost to Australia because the pay and conditions were better there.

Among the placard-wavers was Simon Grant, a strike supporter whose relative is in the care of Rotorua Hospital and its nurses.

"They were telling me about the staffing situation. I thought I'd come out and support, it's the least I can do."

He hoped the government would give nurses a "fair hearing".

"The thing they're concerned about is the staffing. It creates challenges for them. it's not sustainable. 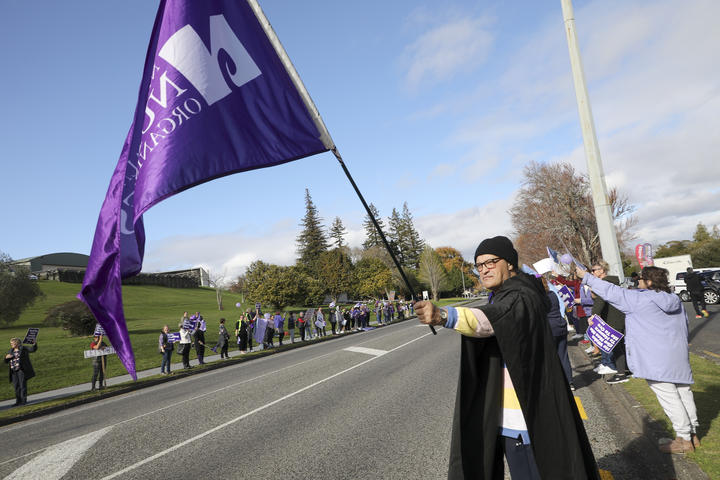 The strike action involved a complete withdrawal of labour by members of the New Zealand Nurses Organisation.

About 730 nurses are employed by Lakes DHB, with many of them members of the union.

Staffing levels were stretching workers to "breaking point" putting them and their patients at risk, he said.

On Wednesday, Covid-19 Response Minister Chris Hipkins said the strike would impact the roll-out of vaccines.

Up to 30 percent of sites might be affected, he said.

A Lakes District Health Board spokeswoman said the Rotorua and Taupō Covid-19 immunisation hubs were both closed on Wednesday "as nurses there are New Zealand Nursing Organisation members".

No appointments had been scheduled, she said.

In a Lakes District Health Board statement on Wednesday afternoon, incident controller Gary Lees said contingency planners, including a wide range of clinical and management staff had met regularly since the DHB received notice of the strike.

"All of the planning has paid off so far, but the impact of the strike on hospital services cannot be underestimated."

Contingency planners worked hard, including over the long weekend, to ensure everything was done to ensure the safety of patients, staff and visitors over the period of the strike, he said.

Twenty-seven planned elective surgery cases and nearly all outpatient clinics for Wednesday were rescheduled or deferred, the statement said.

Rotorua Hospital was at about 72 percent occupancy when the strike began, and essential emergency services such as acute surgery, emergency department, intensive care and maternity care was still provided.

The statement said only urgent cases could be dealt with at the two hospitals' emergency departments during the industrial action, and those with minor health issues should visit their family doctor or Lakes PrimeCare.

He said DHBs had employed almost 3000 additional nurses and midwives in the past three years, in part because of a joint programme with NZNO matching DHB capacity with patient demand.

"Good progress is being made on this but it isn't completed yet and in addition, there are a number of other staff wellbeing measures in the DHBs' settlement offer.

"We acknowledge and accept the claim that this workforce has been historically undervalued and the joint NZNO/DHB work on the nurses pay equity claim should be completed by the end of the year.

Oliff said registered and senior nurses and nurse practitioners made up almost 80 percent of the workforce and when the DHB offer was bundled together, it would see their pay go up by between 4 and almost 12 percent.

"Even more for enrolled nurses and healthcare assistants who are on lower rates.

"That is in addition to pay increases of up to 16 percent in the last pay round."

He said DHBs hoped after the strike "we can get round the table and get a better understanding of what the nurses want".