A Carterton 10-year-old is using the district council's long-term planning process to make her wish of a better pool slide come true.

Molly O'Dwyer was visiting the Wairarapa town's ageing municipal pool this summer when she noticed few young swimmers choosing to use the slide.

"It's closed-in and you either had to go head-first or on your back. If you go head-first you slam your head into the water; if you go on your back, the little ridges on the side, it hurts your back a little, it kind of skins it."

At the suggestion of her mother Amanda O'Dwyer, Molly wrote to Carterton Mayor Greg Lang to ask for an upgrade to the slide because of the current one's poor design and safety issues.

"A couple of days later, in the mail, I got a letter back and that made me feel really good."

With her permission, Lang sent the request for consideration under Carterton's 10-year-plan.

To prove it was a concern for youngsters in the area, Molly spoke to her fellow pupils at St Mary's Catholic School and created a petition signed by her peers, teachers, whānau, and school staff. 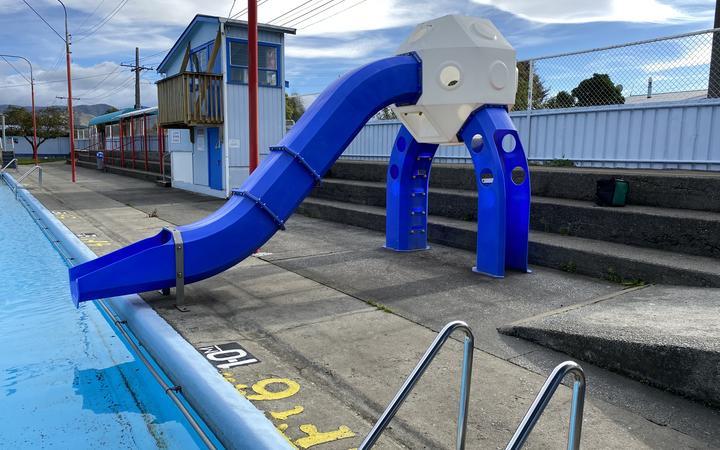 She gathered 91 signatures, about one per cent of the district's total population, and was allowed to stay up late the night before the submissions to put the finishing touches to her presentation.

Population growth was one of Molly's reasons for asking the council to act now on her initiative.

"As Carterton expands, more and more people are coming to our wonderful town and wanting to enjoy the lovely pools," she told them.

"The 2018 census tells us that the population increased by 30 percent. That's 30 per cent more people wanting to swim."

Molly asked for the upgrade to "make the pools even more enjoyable than they are now".

She also raised the safety concerns. "For example, when at the top of the slide, you cannot see if someone is at the bottom because of the roof, and you could easily slide down and hit them."

Council chief executive Jane Davis recommended a "co-funding approach", with seed money from the council, which settled on $10,000.

After the hearings, deputy mayor Rebecca Vergunst said councillors and staff had made a concerted effort to seek feedback from younger people during the consultation process, including visiting local schools.

She said she would love to see more information about council process in schools as part of the curriculum.

"I don't think a lot of young people really understand how council works and what council does. And it is complicated. It's really complicated, even for adults.

"But I feel like if we can teach those basics, then these young people would be set up to participate once they turn 18."

She was also in favour of lowering the voting age to 16.

"I think it gives the opportunity to really support that first democratic process for young people."

Molly's proposal was "a teachable moment" for all, Vergunst said.

"They all use this pool every summer. The kids are down here almost every day. So they'll be able to see exactly what their actions have done and the result of that."

O'Dwyer said she hoped council would act quickly, inspiring other young people to get involved in local democracy.

"Hopefully, any other kids that might be secretly passionate about something might become a wee bit braver as they see another kid do it."

Carterton District Council has pledged up to $10,000 to fund the new slide and its installation, with a community fundraiser planned to bring up the rest of the money, which may cost up to $50,000.