A group of residents living on a rugged patch of coastline at the bottom of the South Island are worried about the future of their crumbling scenic road. 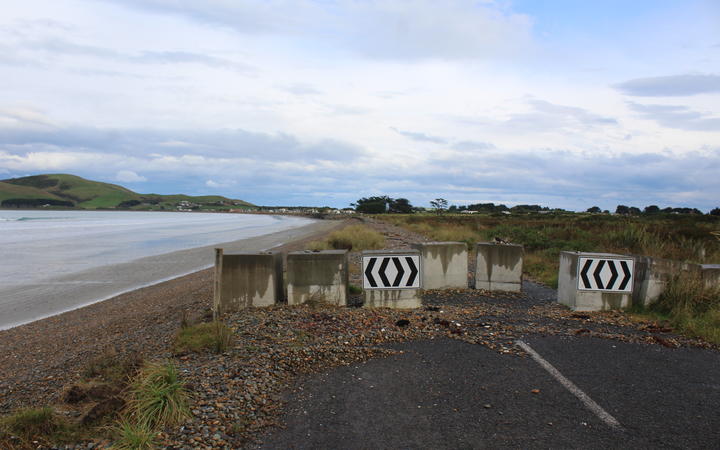 Vehicle access to the road has been blocked for about five years Photo: LDR / Matthew Rosenberg

And concerns are mounting over the ecological impact of a potentially toxic dump site located directly behind the road, just metres from the ocean.

Colac Bay is a small town and popular surf spot 30 kilometres west of Invercargill. It's home to about 60 permanent residents with a burgeoning summer population.

But those who call the place home year-round have more to worry about than their surf break getting overcrowded. 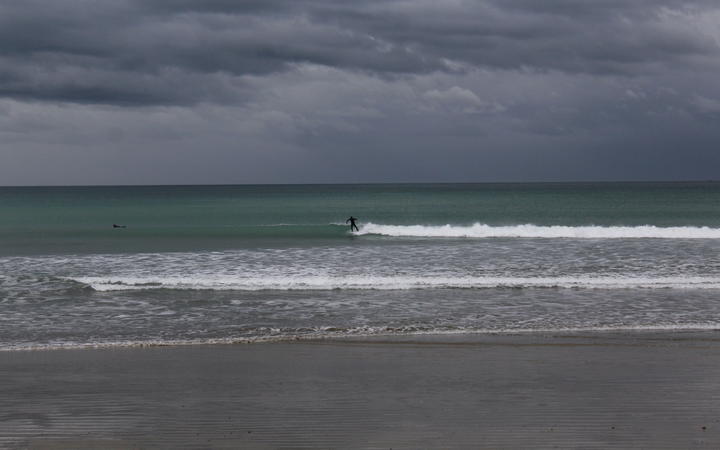 Colac Bay is a popular surfing spot. In the middle of the day on Tuesday, 10 people were out catching waves. Photo: LDR / Matthew Rosenberg

Concerned residents say their neglected coastal road is just one big storm away from triggering an ecological nightmare.

A 60-year-old dump site, which council admit they don't know the contents of, is nestled right next to a disintegrating road.

Resident Kevin Mulqueen has been living in the region for 40 years and does not mince his words.

"The dump is an issue. We don't want another Fox River," he said, referring to the Fox Glacier landfill which was ripped open by floods in March 2019.

That disaster that cost $500,000 to remedy, plus thousands of hours of volunteer time. 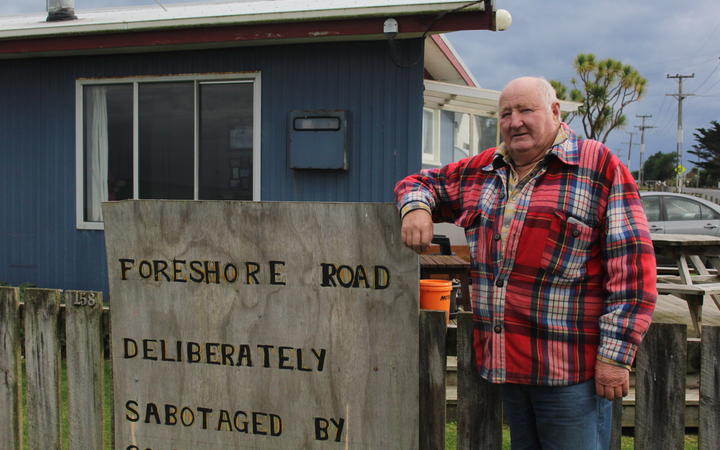 Kevin Mulqueen leans against a sign he attached to the fence of his Colac Bay home. Photo: LDR / Matthew Rosenberg

Similar sentiments are echoed by Alan McKay, who lives on a hill overlooking Colac Bay.

His doorstep was home to blue cod, whales and Hector's dolphins, he said.

In his patch of paradise, he and wife Deen describe the idyllic beach as one of the prettiest views in Southland. It was the safest swimming area east of Haast, they said.

But a walk along the stony shoreline proved that something was not quite right.

Large rocks that line Colac Foreshore Rd protect against the ocean, but fizzle out where it appeared to matter most - right in front of the old dumping site. 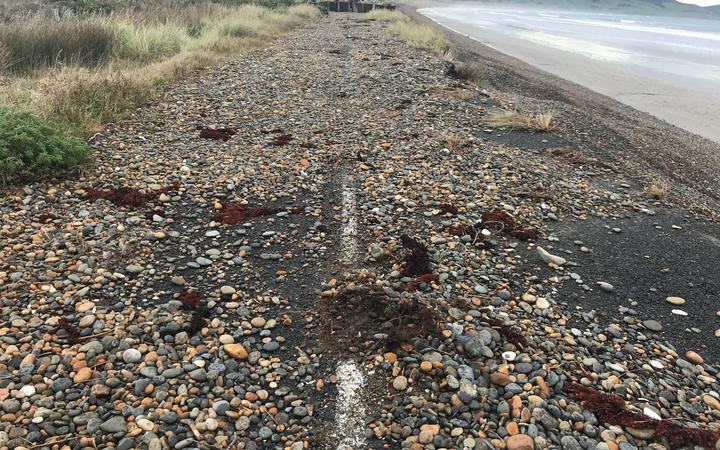 The Southland District Council (SDC) said a report received from the National Institute of Water and Atmospheric Research (NIWA) suggested rocks positioned at that point would create more water disturbance.

At opposite ends of Colac Foreshore Rd, concrete blocks barricade against traffic that once passed through. The tarseal beyond that point has crumbled away, revealing loose stones dropping off to shingly beach below.

"We want the road reopened, that's the goal. But the primary focus is fixing the dump situation," Deen said.

Residents used to take gravel from the site, dump their refuse, then backfill, she said. 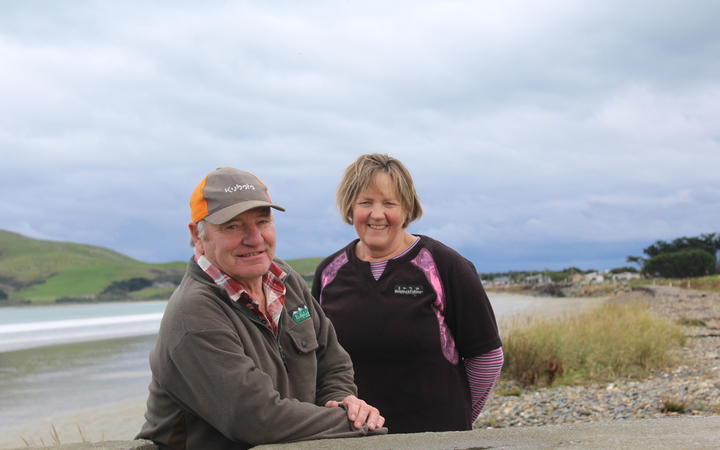 The old tip has since been returned to Ōraka Aparima Rūnaka and regenerated with shrubs.

But the issue remained: Nobody knew what had been put into it.

The trio shared the same fear that erosion would eventually cut through what was left of the road and wash toxic waste out to sea.

"The dump site has been here 60 odd years, as long as I've been here," Alan said.

"In four or five years, that'll be going out to sea." 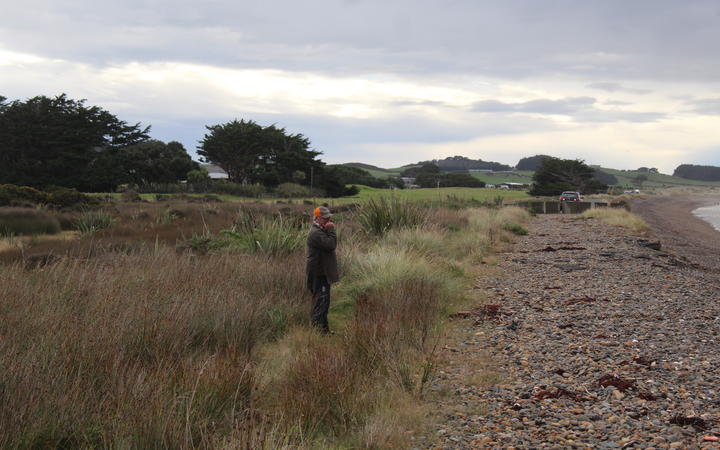 So why had nothing been done to secure it?

The trio, who formed part of the Colac Bay Erosion Committee, were asking the same question.

They gave Southland District Mayor Gary Tong the tour, but he lost enthusiasm several years ago, they said.

A spokesperson for (SDC) said that was not the case.

"Mayor Tong has been following the issue closely and will continue to do so."

The group also claimed one of the issues was a lack of geothermal netting - a protective layer that was placed under the large rocks, forming protection against the ocean along along the road.

The netting only went so far, and so did the rocks, some of which came from the McKay's family farm and were transported to the beach with their help. 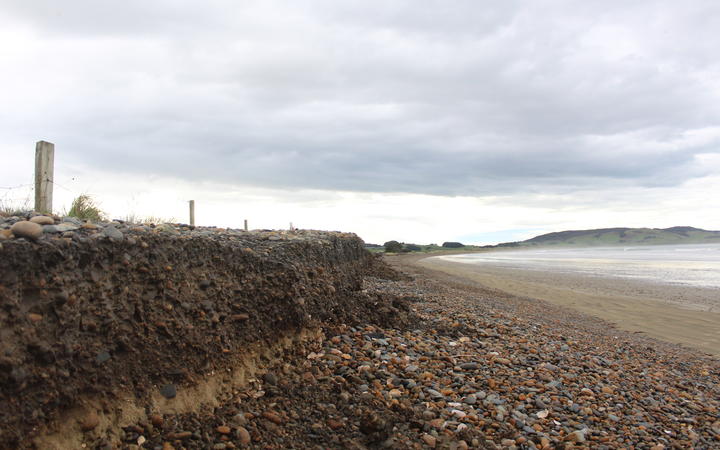 Locals are worried about toxic waste at the 60-year-old dump site seeping out into the ocean. Photo: LDR / Matthew Rosenberg

Now they were worried one freak storm could blow the whole thing open.

SDC group manager of services and assets Matt Russell was the first to speak, saying a sum of $150,000 had been put aside to do a district wide assessment of retired landfills, which would include Colac Bay.

That would not happen until year three of the plan, however, and with 45 to 50 landfills in the region, Duffy was not satisfied.

"We need to make the investigation of that one [Colac] a priority," he said.

Councillor Karyn Owen agreed, saying the site had eroded one metre in 18 months.

"Year three we're going to be looking at a potential disaster," Owen said.

According to a statement released by the SDC, the site was formerly a gravel pit for roading material but ended up becoming a Southland County Council rubbish tip.

Council said it did not know what was contained within the site.