A Kaikōura man is challenging the council to take action over the growing number of illegal signs and hoardings "cluttering" the town and the district. 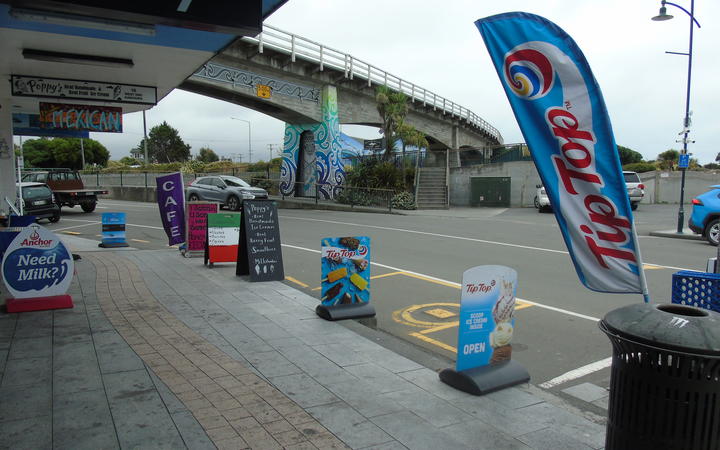 Signs and flags are allowed on Kaikōura footpaths within limits set by a bylaw, but signs unrealted to their location are banned. Photo: Local Democracy Reporting

Ralph Hogan raised the problem in the Kaikōura District Council's public forum last week, after trying for years to persuade council staff to tackle it.

The council's signs bylaw limits the number of footpath signs and flags and their placement and the advertising area allowed on storefronts.

It also bans offsite signs - that is, signs unrelated to their location.

Hogan said more than 30 businesses were violating the bylaw and getting away with it.

"The purpose of the bylaw is to ensure that signs don't present a hazard or a danger to public safety, and that they don't spoil the amenity values, the look of our district," Hogan said.

"Some years ago, Kaikōura district ratepayers paid more than $13,000 for a report on how to make Kaikōura a more appealing and inviting place.

The first paragraph of the report had noted there were too many signs and that made for a 'cluttered and uninviting' look.

"One of the appeals of our district is that there are - or were - no billboards lining the highways. The bylaw prohibited them precisely to stop this kind of clutter creeping into our district - only a very few were allowed to remain from before the bylaw came into effect," Hogan told councillors.

Despite that, the number of roadside signs had continued to grow and despite complaints to the council, it had in most cases failed to enforce its own rules.

"As for the proliferation of flat boards, sandwich signs, and flags, some businesses in West End and Beach Road follow the rules but some do not and it is not fair to those in compliance to have council turn a blind eye to the infractions," Hogan said.

A number of the signs in town posed a safety risk to the public, in particular the elderly, he said.

The council's signs bylaw sets out the details of which signs are lawful and which ones need a permit.

"Signs located on footpaths have the potential to impede pedestrian access.

"In particular, signs located on footpaths in the West End commercial area have the potential to have adverse effects on pedestrian safety due to the number of businesses and the number of people using the footpaths in this area. For this reason A-frame or sandwich board signs require a permit..." the bylaw says.

But a business owner contacted for comment said there was no evidence of any hazard.

Rebecca Meikle, the owner of Poppy's Icecream and Sicarios Mexican Restaurant, has four signs in front of Poppy's; the dairy next door has four and further along Kaikōura Helicopters has one.

"If it was such a concern, there would be injuries," Meikle said.

She believe the drop from the footpath to the road would be more of a danger to the elderly and people using mobility aids.

"We are just trying to get our name out there. How else are we meant to catch people as they drive past?

"Our awning sign is pretty but we need something close to the road where they don't need to swerve last minute."

"I am paying $200 a year to have some seating out the front, the least they could do is let me have my signs, there is enough room for an easy flow of traffic."

Hogan was hoping his address to the council last week did not fall on deaf ears.

"I think the councillors were receptive; the pushback I've had has been from staff - they say they don't have the resource to follow this up and deal with it. "

The bylaw also states the council will "retain a register of signs," but in a letter to Hogan dated September last year, council staff said that had not happened.

"As far as I understand, we do not have a signs registry ... it isn't (that) we allow people to ignore the bylaw, rather, we respond if we receive complaints mainly due to the lack of resources we have to undertake monitoring/enforcement district-wide," the council staffer said.

The council's corporate services manager Murray Dickson told the Star the council did in fact keep a register - but it was not a separate document.

"The list of signs can be extracted from our Ozone system as required for council operations. In other words we don't have a list sitting around - we can generate a list/register from our system."

Historically the council had not actively enforced the signs bylaw and taken a more lenient enforcement approach in general after the earthquakes, due to the pressures on the community and council, Dickson said.

"With current staff levels and the priorities and workload we would have to stop or reduce other things to allocate staff time to enforcement of the signs bylaw."

The council has now directed staff to send out reminders on the sign rules to the Kaikōura community and businesses.

Hogan said he was pleased the council had now acknowledged there was a problem.

"It's a first step in getting things back on track," he said.