Precious wetlands in Kaikōura that have been drained and degraded for generations, are now being lovingly restored and protected - in projects that landowners and farmers hope will inspire others to do the same.

Those behind the restoration work say changing attitudes among farmers are helping create more awareness about protecting natural habitat in farms.

Environment Canterbury (regional council), which is supporting the work, said although it will take decades for the wetlands to fully recover, there are already promising signs.

About five minutes' drive from the Kaikōura township is the home of Barb Woods.

Around these parts, local hospitality is on full display for anyone who visits. 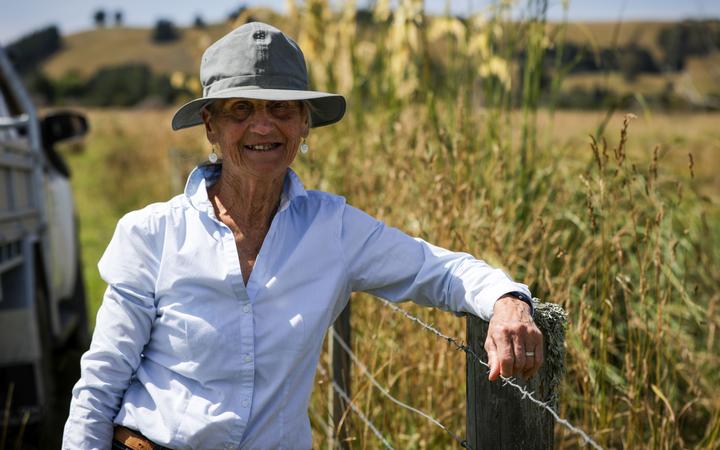 Over a cup of tea and a bite to nibble on, Woods describes how she has been living in the area for about 50 years, and established the Nagari Wetland on a property which has been drained and dairy farmed for generations.

The property consists of two wetlands.

She closed off the first wetland around 10 years ago, in order to restore it to pre-settlement conditions and to help out a pesky native.

"For the pūkeko originally, I know they're vicious little creatures but they're very cute and they are native and they deserve to be here," she said.

Woods said a love for nature runs through the family.

"My father was a great naturalist and environmentalist, a very gentle person and a deep thinker. So he had a wonderful philosophy and I kind of latched on to his philosophies probably." 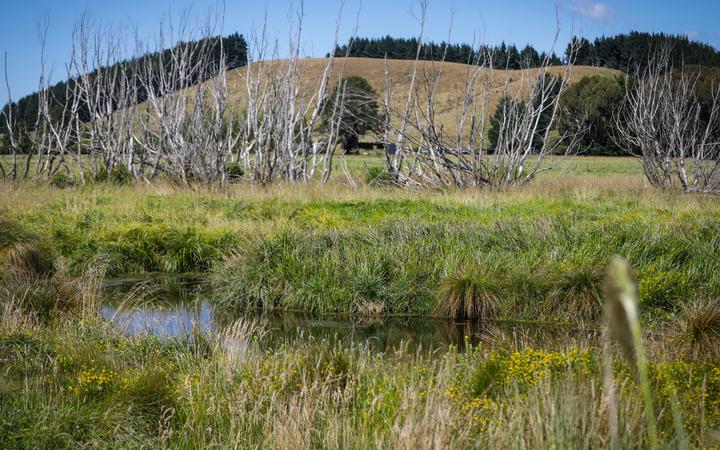 Woods said a lot of help for her restoration has come from Environment Canterbury, also known as ECan.

"They really have supported me very well with the fencing and Heath has been wonderful with drumming up planting ... and Heath has included school children [for planting]," she said.

The person she's referring to is Heath Melville, land management and biodiversity advisor for ECan.

Taking us through the Nagari Wetland, he explained how it is slowly being restored to its former glory.

"We want to shade up established vegetation on the north side so it shades out the stream and it reduces some of the plants that are growing in the stream, which can cause fluctuations in oxygen," Melville said. 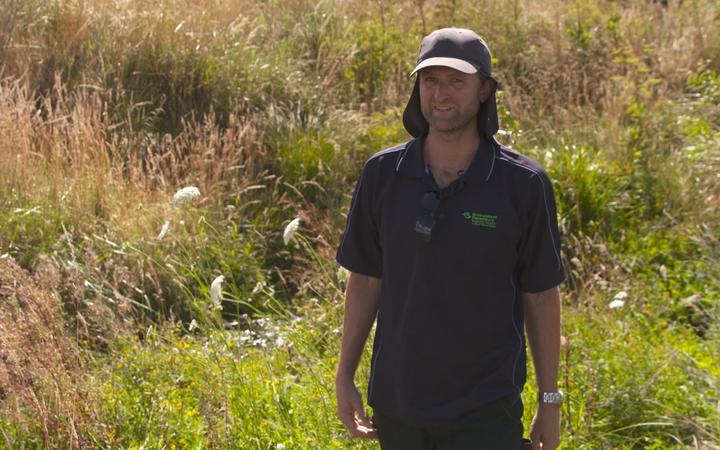 It's hard work but the efforts are there for all to see at Nagari.

"We've planted quite a few flax in here. There's not a huge amount that we've planted [but there's] a decent amount around these wet margins where we've planted. So yeah it'd be nice to have that established as a bit of a flaxland in here," Melville said.

Further away is the Mt Fyffe Wetland, which is also a restoration and protection project by a local landowner.

Melville said it's another special place.

"One of the things that makes this wetland quite significant for us locally here is the presence of the species, astelia grandis," he said.

"So there's a good population of astelia grandis in here, which is really common on the West Coast, but this is the only site that we know of in the Kaikōura zone that has this plant." 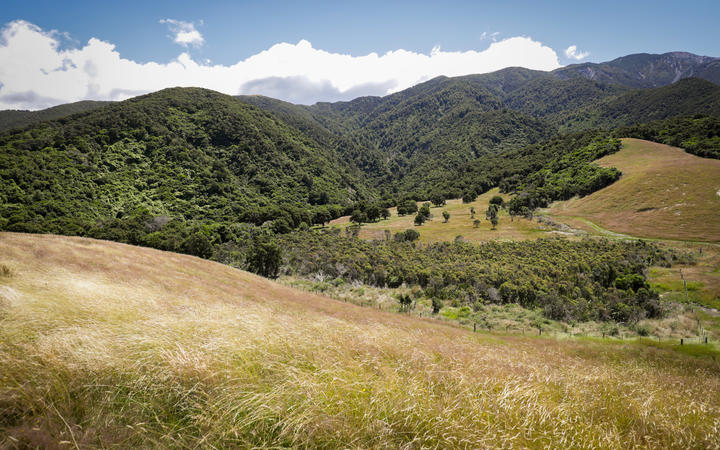 Melville admits getting farmers and landowners on board hasn't always been the easiest task - as people aren't always too willing to give up some land.

"Trying to get these projects over the line is a real challenge," he said.

"But I mean quite often, a back and forth with the landowner. They do start to get a sense of what we're trying to do and the pieces of land that we're talking about retiring and restoring or they don't hold a huge amount of value for grazing."

Just south of Kaikōura in Peketa, Spencer Kahu, aged just 22, manages a dairy farm on land part-owned by his family.

The land is home to the Kaikōura region's largest wetland, Lake Rotorua. 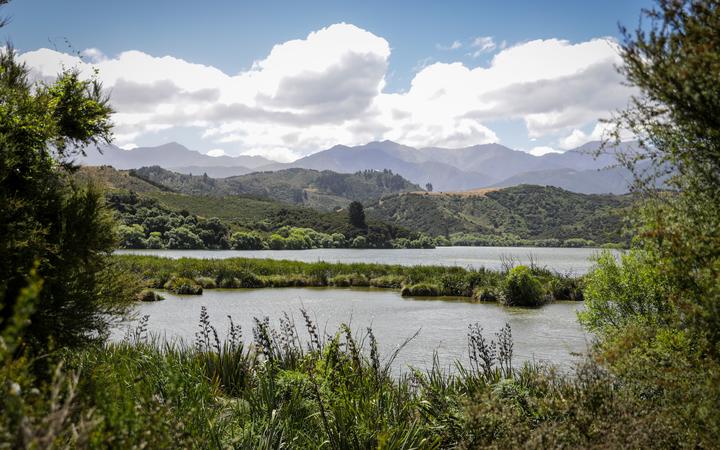 Melville said the lake was in poor shape until about four years ago, when Kahu had a boundary fence installed.

"It's just made the whole lake a lot more healthy. When I first got out here I was doing test samples with Cawthron Institute ... and there was real bad algae back then and ever since we've done the fence and limited the stock getting in near the lake and whatnot, it's really turned the lake around," he said.

Kahu said giving up a bit of land for nature to re-establish itself is a sacrifice worth making, and is important to tangata whenua.

"Me as a Māori - I think Māori think with their stomach more than bloody anything. You know we've got the trout and we've got the eels and down on the outlet we've got the flounder," he said. 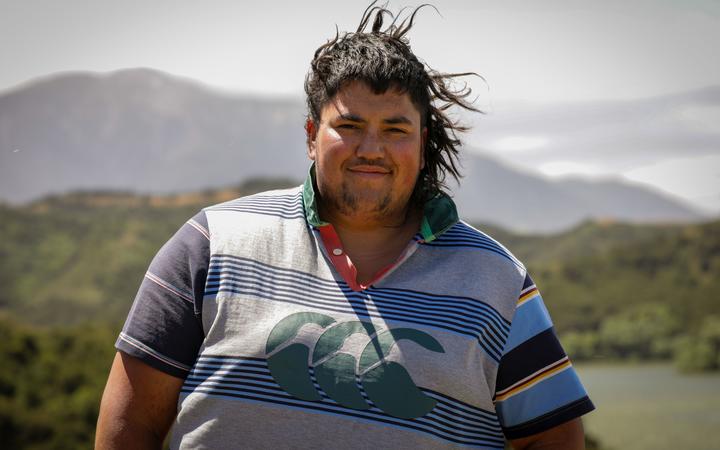 Such is the destruction of natural habitat since human settlement, everyone involved knows that it's a multi-generational project.

Barb Woods won't be around to see the wetlands back to full health, but she's okay with that.

"It's a very slow process really, it took a 100 years to destroy it so it's probably going to take another 100 years to restore it I imagine," she said.

Environment Canterbury said every zone in the province has $100,000 a year for freshwater-related restoration projects through its Immediate Steps Fund, and are hopeful it will attract more landowners.