An apology has been made and accepted after a Grey Power newsletter labelled a councillor's use of te reo Māori at a meeting an "insult". 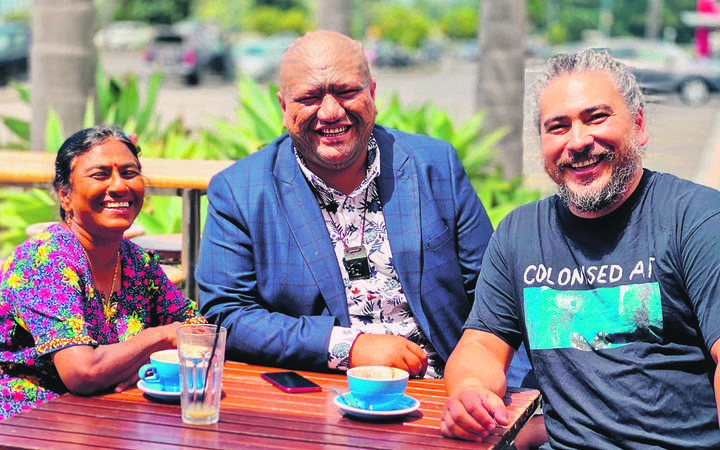 Siva Panadam and Louis Rapihana have agreed to work together to further the use of te reo Māori after their differences were resolved in a café meeting with mutual friend Toi Kai Rākau Iti. Photo: LDR / Supplied

Ōpōtiki district councillor Louis Rapihana had been hurt and offended by comments made in a newsletter that circulated following a Whakatāne Grey Power meeting he spoke at late last year.

In the newsletter, Grey Power member Siva Panadam apologised to attendees saying she "had no idea Louis Rapihana did not speak English".

She added she "would have got someone to interpret considering 90 percent of attendees were non-Māoris" [sic].

The newsletter went on to say if Rapihana's use of te reo was "deliberate" then it was "an insult" to two guest speakers at the event who were not Māori.

However, at a face-to-face meeting last week organised by a mutual friend, Bay of Plenty Regional councillor Toi Kai Rakau Iti, the two were able to mend their differences and have agreed to work together to further the community's understanding of te reo Māori.

Rapihana said the way Panadam spoke about te reo Māori at the meeting was in stark contrast to the way her newsletter was written. He said she explained some of the comments were intended as a joke, although her "blunt" way of speaking did not translate well when written down.

"It was good to hear her speak so passionately about te reo and the things she would like to do to encourage use and understanding of the language," Rapihana said.

At the café meeting, Panadam expressed her wish that te reo Māori be compulsory in all New Zealand schools and said she would be asking Grey Power to lobby the government on that.

Whakatāne Grey Power has asked Panadam to resign from her position although Rapihana does not support that.

"It's not about her resigning or bringing her down, it's about bringing awareness to the organisation and bringing issues into the light," he said.

"This has brought forward a lot of negativity within our community, but I am happy to work with Siva [Panadam] and Grey Power if it helps."

Panadam agreed the newsletter and resulting media coverage had highlighted the issue, but said it was good people were talking about how they felt, and it was no longer being swept under the carpet.

She said her newsletter was intended to encourage those speaking te reo Māori to translate when speaking to people who don't understand it. She said she was very supportive of te reo and Māori culture.

"By translating, that will help people to understand te reo and Māori customs and when they understand then they can form a connection to the culture," she said.

"It makes the language more accessible, especially to migrants, and we can build relationships and begin to move forward. I would like to work with Louis [Rapihana] on how we can build on this thing and live in a land of peace and harmony with all cultures."

Bay of Plenty Regional councillor Toi Kai Rakau Iti said the meeting between his two friends was a "fantastic" demonstration of how the community could find its way through "some of the gnarly and difficult tensions".

Panadam and Rapihana's new friendship was sealed with a gift of homemade guava preserve and a friend request on Facebook.