Getting around Reefton used to be relatively easy for wheelchair-user Lisa Neil.

The 65-year-old moved to the town about 10 years ago after losing the use of her legs as a result of an accident.

The ease of wheeling down to the shops, the library and the pharmacy was one of the features that attracted her to Reefton.

That all changed about five years ago when the NZ Transport Agency revamped Broadway, the town's main street, and the link between State Highway 7 and State Highway 69.

After that, crossing the road required nerves of steel - and biceps to match.

"What happened was they raised the level of Broadway, and the camber went from gentle to really steep so you go down to gutter level and then you have to push yourself up the slope and stop and hold the chair in place by the wheels while you look for traffic," Neil said.

She said the camber might not look significant to an able-bodied person, but get down to a sitting level and it was a different story.

"You have to go right out into the stream of traffic to see what's coming and then go hell-for-leather and hope no one comes shooting round the corner and doesn't spot you."

Shoppers parked right on the corner where the park lines taper off made the intersection even more hazardous for someone in a wheelchair, she said.

"I used to be able to carry a couple of grocery bags balanced on the foot plates, but I can't do that now because of the gradient - and it would increase the risk of tipping over."

The revamped road surface posed another risk to life and limb, not just on the Supervalue corner but also at the intersection of Broadway and Grey Road, State Highway 69. 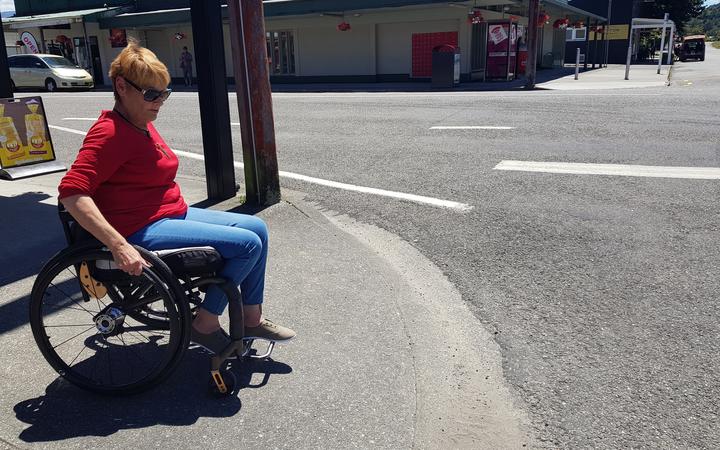 Lisa Neil now risks being tipped into the road because of the camber of Broadway, the town's main street, and the link between State Highway 7 and State Highway 69. Photo: LDR / Lois Williams

"There is such a dip between the road and the footpath that you have to go out on to the road right on the corner and approach it at just the right angle or you tip out."

That had happened not just to her and at least one other wheelchair user and both fell flat on their faces to the kerb, Neil said.

"It's also a very dangerous crossing for those on mobility scooters - some of the pensioner housing people from up that road, and people coming from the hospital who push the rest home residents."

Neil is the chair of Who Cares House, a social services agency in the town, and has found herself a go-to person when councils consult the community on the needs of people with disabilities.

The intentions were good, she said, but the well-meaning able-bodied could also be remarkably oblivious.

"I was invited to a meeting the Buller council called last year to advise on accessibility problems. But I can't get into the building the council uses for meetings ... the old Plunket Rooms has a ramp (but) you can't get up in a chair - it was built for prams."

Once up on the veranda the next obstacle was a step no wheelchair could negotiate and she had to be pushed all the way into the meeting.

"It was ironic - they ask me to take part in the democratic process but how am I supposed to do that with dignity when I can't even get into the building without help?" 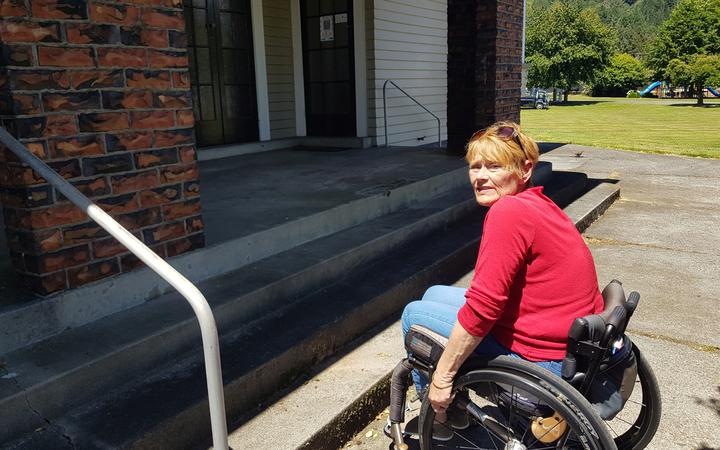 Lisa Neil at the venue for the council's meetings. Photo: LDR / Lois Williams

Buller District Council said it had taken up the issue of the main Broadway intersection with NZTA.

"We have put in a proposal for a crossing north of the supermarket that would even out the camber and the drop between the kerb and the road, with possibly a safety island in the middle," a spokesman said.

The proposal had passed the first hurdles for funding, but was making slow progress through the agency's approval system.

"The council has spent more than $250,000 on Reefton footpaths this year, and we have built quite a few 'dip crossings' to make it easier for people using chairs or scooters and people pushing prams."

The dangerous Grey Road corner could be avoided by using aligned dip crossings further down the road, the staff member said.

Buller Mayor Jamie Cleine said the council was acutely aware that more needed to be done to make Reefton more accessible for wheelchair users, but also for older people.

"The demographic is changing, lots of seniors are moving to the district. The focus has been on visitor and tourists for quite a while and now it needs to be on making life safe and convenient for the people who live here all the time."

The challenges confronting Reefton people with disabilities had been around for years, and would take time to resolve, Mr Cleine said.

He could not say if and when the council would make its Reefton meeting rooms accessible to wheelchair users, but he was well aware of the issues.

"We are working through them, bit by bit, in line with our mobility strategy -- these things are definitely on our radar."

NZTA said it had received the council's proposal for a safety crossing on Broadway, before Christmas.

"The proposal is currently being considered and we expect to respond to council next month," spokesman Andy Knackstedt said.

"We've not had any concerns brought to us about the intersection of Grey Road and Broadway. We encourage anyone with concerns about this or any other state highway intersection to contact (NZTA)."

Neil said that in the meantime she would go on risking life and limb to do her shopping.

Her fervent hope was that the authorities might one day learn to run their plans past wheelchair users before embarking on projects that could make their lives even more difficult.