Flood protection for Whakatāne's town centre is about to get a much-needed upgrade to protect people and property against a one-in-100-year flood. 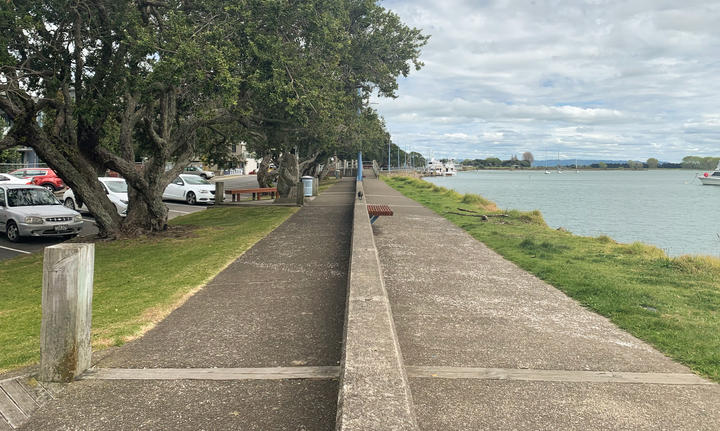 The floodwall which runs down the middle of the riverbank walkway on Whakatāne's Quay Street may be moved to the landward side and raised up to 850 mm. Photo: CHARLOTTE JONES / LDR

Project Future Proof has been drawn up to upgrade stopbanks and floodwalls surrounding the central business district and address seepage issues.

It was presented to Whakātane District councillors yesterday by staff from the Bay of Plenty Regional Council.

The council was criticised following major floods in Edgecombe in 2017, where the stop banks failed and more than 300 homes were damaged.

The Whakatāne town centre was less affected, but stopbanks next to Kakahoroa Drive and Quay Street had experienced seepage problems, particularly during the 2017 floods, said project manager Lars Thiel-Lardon.

The presentation outlined how geotechnical investigations, flood data and the effects of climate change have shown up weaknesses in the existing flood defences, which would not protect the town centre in coming decades.

Seepage occurs when water makes its way under the stopbank through the sand layer and begins to seep out slowly onto the ground surface on the protected side.

In extreme cases, such as in Edgecumbe in 2017, ground on the other side can begin to 'boil' and be washed-out underneath, which leads to stopbank failure.

This was also seen outside the Quay Street apartments in the 2017 flood.

"As guardians of the stopbanks we need to stop that seepage," Thiel-Lardon said.

The regional council was investigating several measures, such as inserting steel sheets into the Kakahoroa Drive stopbank and the Quay Street floodwall, to create an impermeable barrier.

This method is used around the world and can be seen in the Kopeopeo Canal near Awakeri.

The council was also looking at moving and raising the concrete flood wall along Quay Street, raising the floodbank along Mataatua Reserve, and using hundreds of hectares of pasture as water detention basins.

None of these options are set in stone.

District councillor Gerard van Beek asked why the regional council was considering sheet piles in the Whakatāne stopbanks when the same method was not considered for Edgecumbe.

Thiel-Lardon said they were not preferred in Edgecumbe because there the pressure would build up leading to a failure, whereas in Whakatāne the sheet piles could be inserted and not hit bedrock.

The large metal sheet piles lengthen the seepage path for excess water to then be pumped back to the river. They also stop the formation of 'piping', where water flows through the flood defence picking up foundation material, potentially leading to stopbank failure.

"This is not about stopping the seepage, but rather controlling and slowing it," Thiel-Lardon said.

Councillor van Beek said the Wairaka community wasn't pleased the last time the Mataatua Reserve stopbanks were raised, and he wouldn't be surprised if there was push back again.

He questioned whether the stopbanks on both sides of the river would be raised and Thiel-Lardon said if the regional council raised the stopbanks, it would also raise the reserve and gradually smooth it to "look nice" rather than like a bund.

Stopbanks on the Piripai side of the river might not be raised if other flood protection work was successful.

District councillor Wilson James was concerned about which land the regional council would use to create water detention basins.

Engineering manager Mark Townsend said it would enhance land that already suffered from flooding, so it could hold more water and reduce pressure on the stopbanks surrounding the townships further downriver.

"For example, we could create a series of one metre high bunds; once the water enters one it can then cascade into the next."

The regional council would complete the work to look as natural as possible, he said.

It is consulting with potentially affected landowners now.

Townsend said if this work was successful, stopbanks might not need to be raised in central Whakatāne.

Deputy mayor Andrew Iles raised concerns that "once again, rural areas are the sacrificial lamb for the urban sector". But Townsend said the regional council would do its "utmost" to protect any settlement, rural or otherwise.

However Iles said utmost was no guarantee, and Townsend responded that he couldn't guarantee anything.

At this, district councillor Victor Luca asked to what degree the regional council could guarantee the work.

"We do the best we can using the most up-to-date technology and best practice, but there is no iron-clad guarantee," Townsend said.

The town defence upgrade is one of the projects aimed at developing better community resilience and flood protection for which the regional council has received funding through the Government's Crown Infrastructure Partners "shovel-ready" fund.

The fund was aimed at projects able to be undertaken in the short to medium term, to create work and help support economic recovery from Covid-19.