The alarm goes off. That's one thing that never changes - that jarring bleet tearing you from the sweet embrace of sleep. But this is 28 September 2050 - that alarm is powered completely by renewable energy, as is everything else in your home and at the office.

The council mandated that in 2025. Your home, warm and dry, is one of a series of identical terrace houses on your street - high-density housing is encouraged. 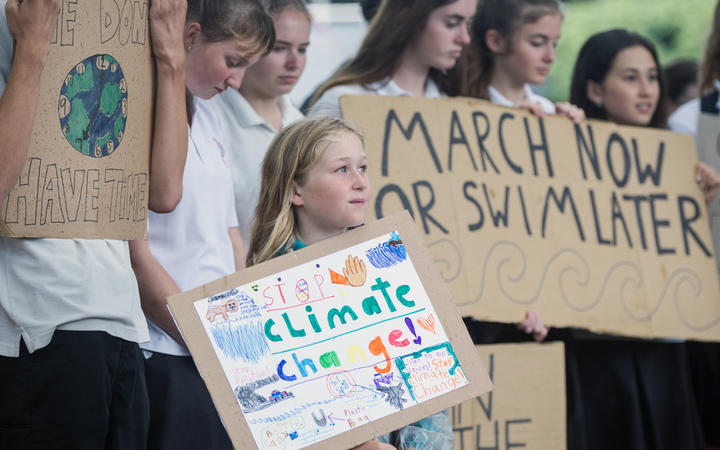 Amelia Foote-Webb, then 9, from Malfroy School at the Rotorua school strike for climate change in March 2019. Photo: Rotorua Daily Post via LDR

Dragging yourself out of bed, you go to wake your eight-year-old daughter, Hahona. That's another thing that never changes, the eternal struggle of dragging your child out of bed and off to school.

You pop into the bathroom to spend a penny, silently thanking yourself for doing the washing last night so Hahona has something clean to wear to school today.

The greywater from that wash watered your garden overnight too - just as well since it's forecast to be 22C today.

You flush the toilet with collected rainwater - the tank is full since the other week it absolutely bucketed down. That flush, and the washing last night, helped you save a little on your rates bill since around 2023 the council brought in rates relief incentives to promote the efficient use of rain and greywater.

Hahona fed and dressed, you're out the door and only running five minutes late - some kind of miracle.

The pavements are wide - part of a "modal shift" approach by local authorities. Modal shift sounds jargony, but it is just about providing more resources towards forms of transport - modes - other than cars.

It means there's a shared path all the way from your front door, to school, and then on to work in town. There are also more bike facilities around town, like secure racks and an e-bike charging network.

You remember your mother is coming over from Ōpōtiki next weekend - you'll have to make sure you're at the railway station to pick her up.

You'll take her to the night market, a zero-waste event.

Perhaps, you muse, you'll take her and Hahona out to the Rotorua greenbelt, Korowai Kakariki. It's beautiful there now those trees - planted by community groups - have matured a bit, and predator-free efforts mean the native birdlife is flourishing. Hahona loves the rotund, flappy kererū.

Formerly agricultural land, the council transitioned the land for Korowai Kakariki around 2025. The farmers moved on to what the Ministry for Primary Industries calls "high value-added plant protein agriculture" - in this case, amaranth. They receive rates relief for changing the use of their new land from a dairy farm, too.

While at Korowai Kakariki, you could pick up some veggies from the communal garden, depending on what's left over after the morning rush. You'll go help out with pest trapping in a couple of weeks to do your part.

Lost in thoughts of the weekend already, you shepherd Hahona, who's on her bike, away from the edge of the shared path and Te Ngae Rd.

Publicly funded buses whine rather than gurgle as they go by - they're fuelled by a biofuel blend, reliable, frequent and cover the region well. The two that go by in short succession are both full.

Other changes such as a carpool app, free recharging and parking for private electric vehicles has seen their uptake steadily rise and traffic steadily decrease. Years ago more lanes were added to the road which seem a little unnecessary now - backed up traffic on Te Ngae Rd seems a distant memory.

A waste truck whirrs by. It collects organic waste as well as regular - that is, the organic waste that hasn't already been used in local composting projects in community gardens.

There's plenty of people making use of the footpath on a clear day like today too - mobility scooters, wheelchairs, Limes, kids on bikes - the lycra-clad crew take the fast cycle lane on the road.

The alarm goes off... 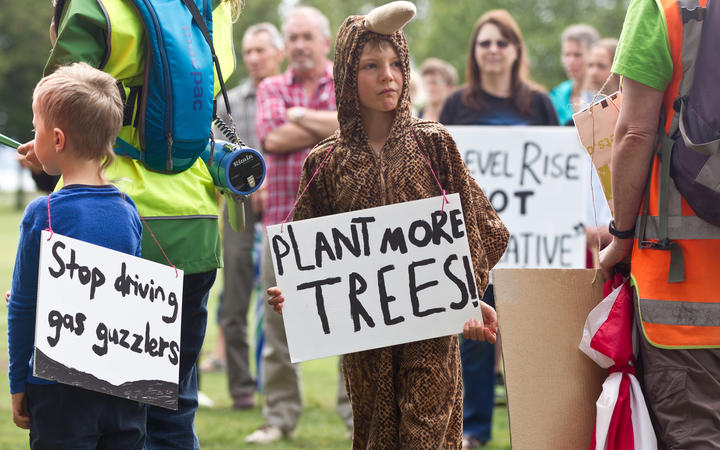 Simon Gillies, then 7, at the Rotorua People's Climate March in 2015. Photo: Rotorua Daily Post via LDR

It's a picture painted but by no means a sure thing.

This vision has been put together drawing on some of the proposed actions within Rotorua Lakes Council's Climate Action Plan.

On Thursday, the council approved the plan to move to "wider public engagement", although the consultation period began on September 7. It will close on 16 October. The council aims to finalise and adopt the plan on 26 November - the last council meeting of the year.

So what is the plan combatting and what might it change about daily life?

Citing data from the Ministry for the Environment, the UN's Intergovernmental Panel on Climate Change and NIWA, it says in 2040 Rotorua will have around 15 more days over 25C per year.

It says the average temperature of the region is estimated to rise by 1.1C.

The number of cold days - where the temperature goes zero and below - would be seven fewer than in 2020.

If that sounds like an extended summer, there are drawbacks. The prevalence of extreme winds would increase, it says, as would climatic drought, by 7 percent.

There would be about 15 more days per year with an extreme forest fire danger and a 5 percent increase in the frequency of extreme rainfall events.

Fast forward another 50 years, and the outlook for Thursday - or indeed any day of the week - is nigh on apocalyptic.

According to the document, the risk of extreme forest fire leaps to nearly 33 more days a year, and the temperature is, on average, 3.25C warmer than 2020.

Rotorua's first district-wide greenhouse gas inventory was completed in 2017, and covered emissions during the 2015/16 financial year.

That inventory found the district emitted just over 1.5 million tonnes of carbon dioxide equivalent, net, in 2015/16. That included forestry and accounted for carbon removals.

Each person in the Rotorua district produced, on average, 21 tonnes of gross emissions per year. The national average is nearly 18 tonnes and the regional average just under 14 tonnes.

While there was a large forest sink in the region, harvesting cycles meant that over a 50 - 100 year period, that had relatively little effect on overall emissions, the plan says.

The next inventory will be updated in late 2020.

The plan proposes to see reduction in non-biogenic emissions to net zero by 2050, a reduction in biogenic methane emissions of 24 - 47 percent, compared to the baseline by 2050 and interim targets for 2030.

Those were a reduction in non-biogenic emissions by 30 percent and biogenic methane by 10 percent compared to the baseline.

These targets largely follow the lead of the Zero Carbon Act.

The plan stated that without any specific actions to reduce them, emissions were expected to increase to two million tonnes by 2050.

All of that meant net emissions needed to reduce to around 1 million tonnes and biogenic methane to 640,000 tonnes by 2030.

Getting net emissions down would be "likely to require some offsetting through an increase in forest stocks", the plan says.

In 2017 the Organisation for Economic Co-operation and Development (OECD) reported that New Zealand contributed only a "tiny" share of global greenhouse gas emissions.

That meant any efforts in Rotorua had to be part of an almost-universal global effort in order to slow (or stop) climate change.

It proposes five main areas for action - resilience of infrastructure, the preparedness of the community to respond and adapt, improvement of ecosystem services and health, support for businesses preparedness and prioritising and integrating climate "risk and opportunity" in council decision-making.

A selection of areas of interest in the proposed actions within the Rotorua Climate Action Plan.

These are not comprehensive - all proposed actions can be found in the plan itself, available on the council website.

Some areas impact other organisations, such as the regional council for public transport.