Reefton's long-serving weather guru Tony Fortune believes if people learned to burn coal correctly the town would not have a problem with air pollution. 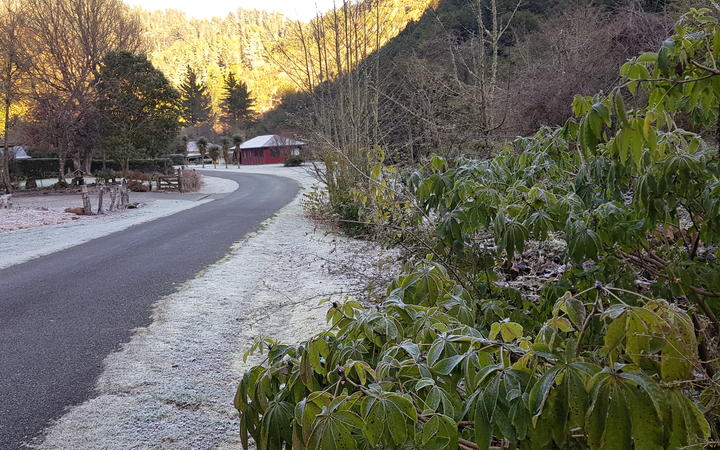 Beautiful but bleak - a minus 9C frost in Reefton on 2 July. Photo: LDR / Lois Williams

Except perhaps on the odd day when the weather gods afflict the Inangahua valley with a temperature inversion and the locals crank up their fires.

The retired teacher and JP has been keeping meticulous hand-written records of Reefton weather since he was a boy of 11, in 1963.

He hasn't missed a day in that time: if he's out of town - he delegates the job.

He flicks through his current exercise book to find the two days last month when the town's air failed to meet the environmental standard - a maximum 50 micrograms of the tiny particles known as PM10's - per cubic metre of air.

Reefton - nestled between surrounding hills and terraces - is the only town on the coast with a gazetted 'airshed'.

That means the regional council must constantly monitor the air quality and sound the alarm when it hits levels considered to be a health risk. 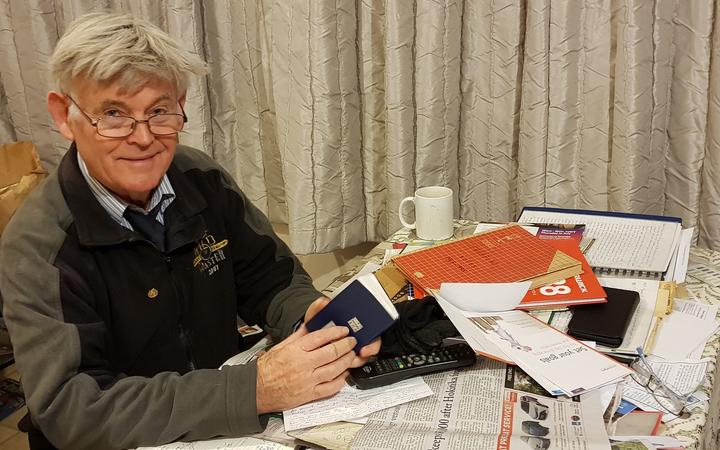 Tony Fortune has been keeping records of Reefton weather since he was a boy. Photo: LDR / Lois Williams

Last month's 'exceedances' as the council calls them, were the first since 2016.

"There were two days in June when we exceeded the limit but not by much," Tony Fortune said.

"June 21st for instance was minus 2 degrees and foggy, and when that happens the humidity goes way up. It actually cleared later that day and we got up to 9 degrees. That's warmer than the usual winter temperature; we're usually around 4 or 5 degrees."

That weather pattern can produce a temperature inversion, with a layer of warm air higher in the atmosphere trapping colder air and smoke beneath, he said.

"One of our UE students did a study a few years ago and found quite a lot of the pollution is between roof height and 20 metres above that. The air flows down the hillsides, into the town and makes the smoke rise but the warmer air above keeps a lid on it.

"You can actually see the layers sometimes when you come into Reefton from Westport - the wind can't get down to the inversion layer and disperse it. But the town is tucked below the worst of it so you're not actually breathing the more concentrated stuff." 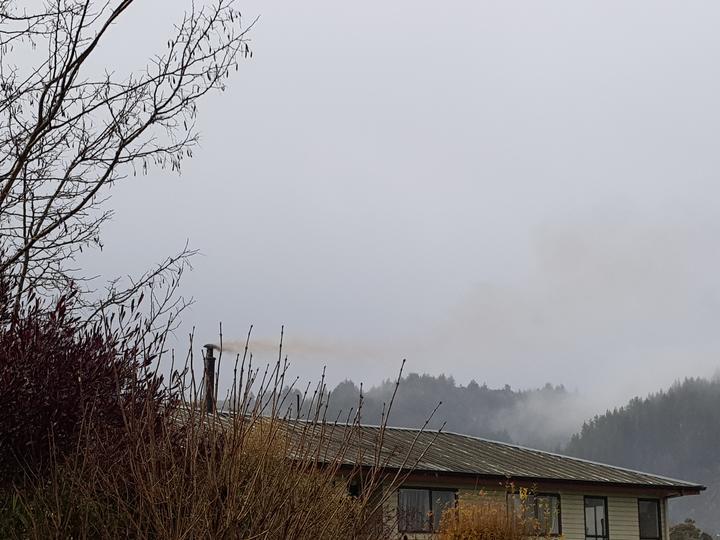 On some of his many tramping expeditions he has experienced the temperature difference.

"You go up the hill and you feel the wind coming from the north - it can be 5 degrees warmer up there, and you come back down into the cold."

The offending smoke comes from the multi-fuel burners many Reeftonites rely on to stave off the winter chill but it doesn't have to create an air quality problem, Fortune said.

"If we burned our coal properly it would not produce all that smoke. The trick is to get the wood burning well, then add a little coal, and so on - keep it burning. Little and often. Don't heap it on and damp it down - or you get that thick sulphurous stuff coming out of the chimney. If you are doing it correctly you shouldn't see much smoke at all."

Today's coal and wood burners are far more efficient than in the past, and the pervasive smell of coal smoke is rare, he said.

"When I was kid I could be at one end of town down by the racecourse and you couldn't see hills at other end, because everyone had open fires and coal ranges roaring. Those days are long gone."

But the pressure is still increasing on councils and communities to cut carbon emissions to limit climate change.

"The PM10 limit used to be 100; now they're down to 50 which is pretty low and we've only hit that twice this year, which is not too bad," Fortune said.

"Looking at our levels, we got to 50 one day and 52 the other. If it gets any lower they'll make it impossible to conform. I was in Beijing last year and the level was 150. That's when you complain."

About 14 years ago, the regional council was working with the Reefton community to trial electrostatic chimney filters known as OEKU tubes, with some promising results.

But it put that project on hold when the government announced it was reviewing the national environmental standard for air quality, the council's planning and science manager Hadley Mills said.

"There was no point in going further till we knew what the new rules would be and finally it looks like it's coming out in the next few months, so we now have some idea of what's in it."

Among the new air quality requirements: councils must measure levels of even smaller particulate matter: PM 2.5's, which are now thought to be more harmful to human health than PM 10's.

And a list on the Ministry for the Environment's website shows the brands and models of solid fuel heaters that will in future be the only ones that can legally be installed.

Not one of them is capable of burning coal.

Regional councillor John Hill has observed that the new rules will stifle the development of products that could trap smoke particles and allow people to burn coal cleanly.

And you'll hear it said in Reefton, not entirely in jest, that if it ever comes down to banning coal for home-heating, Paparoa Prison will have to open a new wing for the local outlaws.

While winters lately have been milder in the town they can still be bone-chillers and Tony Fortune's records appear to show a roughly 20-year cyclical weather pattern. 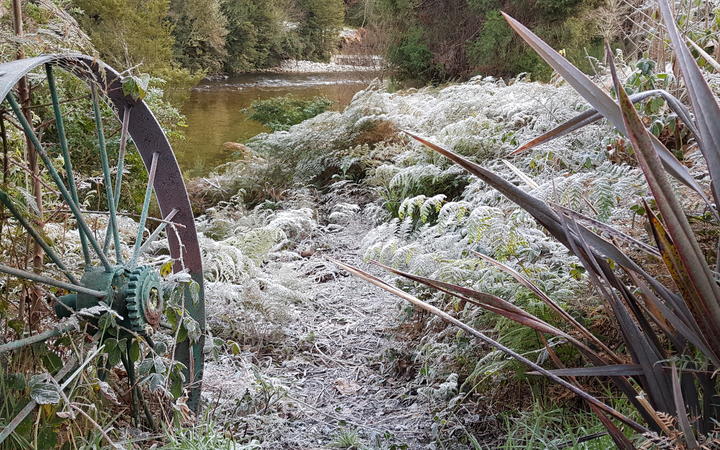 The Inangahua River has been known to freeze half over in severe winters. Photo: LDR / Lois Williams

"In 1961 we had 14 inches of snow on ground, that's what got me interested in weather. In 1982 we had days of hoar frost and the Inangahua River was half-frozen over at the swing bridge.

The sort of temperatures that might laugh at a heat-pump, perhaps?

Heat-pumps pumps are not as effective in older-style homes or affordable for many locals, he said.

"My thought is people have to keep warm, but they just can't afford the electricity. Everyone says heat pumps are cheap but I know a couple of pensioners who got them and their monthly bill went from $120 to $500 a month. They had them adjusted but it still cost them a lot more than wood and coal."

Coal sells for about $200 a tonne delivered, in Reefton and for many households, that's enough to keep them cosy - along with wood - through the cold months of June to August.

A number of older folk in Reefton also receive free firewood. It's not uncommon for people to go out and get a load of wood for a someone they see in need, Fortune said.

He wonders why the town is the only one in Westland where air quality is under official scrutiny.

"I've been to other places on the coast in evening, and when it's calm, it's equally as bad as Reefton. It's just that somehow, we're the culprits."

The regional council recently received a $60,000 Envirolink grant to further research smoke pollution in Reefton and find out if there is a link between meteorological conditions and the levels of PM10's and PM 2.5's in the airshed.

That study is now underway.

Tony Fortune on how to burn coal without stinking up the town:

"We had a copper for the washing, coal range and two open fires in this house - all roaring their heads off in winter, except for the copper.

"The problem comes when people are stoking up, just pouring coal on, so it doesn't burn properly. All it does is produce lots of sulphur and that yellow smoke that comes out of chimney? That's people who've choked their fireplaces and all of a sudden it'll go pouf! And catch. Flames and so on. But you've just got to feed it more often rather than put a whole heap of coal on and wait.

"What I do, is light fire with paper and kindling; put a little bit of coal on then my wood then coal over the wood and it doesn't smoke nearly as much. You've got to get your wood burning really well before your next layer of coal, just a shovelful."

On winters past in Reefton:

"As a kid in 1963 I remember waking up one morning; I had the blankets up to my chin and I put my hands out and felt ice where I was breathing. It was all over blanket. I looked at the temperature and it was minus 3 degrees. We used to scrape ice off the inside of the windows.

"I've insulated the place and it's lots warmer but a lot of people here still don't have insulation.

"Reefton's coldest day this winter was on 2 July when the temperature was minus 9 degrees."

"These last few years, winters have been quite a bit milder; we've had more winds from the north.

"I'm not a doomsday believer but I know it's gradually getting warmer; we can see that all round us. The glaciers have advanced and receded over the years but have not been fed by snow on this side of the Alps and they're on a big decrease.

"In June we had only 93 millimetres of rain, compared to the average of 216mm for the month.

"At the moment there's no snow on the Paparoa's. That's very unusual. In the early years of settlement Reefton winters were extreme: 1878 they had 6 inches of snow in June, 18 inches in July and two feet of snow in Broadway in August.

"But 10 years later in the 1880s the papers were saying the winters were the mildest since settlement began: no snow all winter; plants blossoming in July then snow in October. It's happened before so that leads me to believe its very cyclical. But the overall trend is warming."