Permanent vehicle dwellers are staying in a major Whangārei stadium's overflow carpark for weeks at a time while freedom campers around the district get moved on after as little as one night. 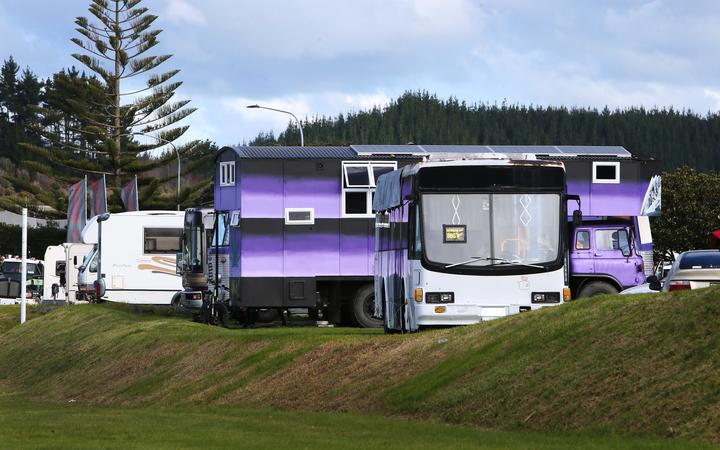 It is not doing that, however, with permanent vehicle dwellers (PVDs) staying for much longer than that - up to about three years on and off - at Whangārei's Cobham Oval carpark site, adjacent to ratepayer-owned Semenoff Stadium and Northland Cricket's Cobham Oval.

Whangārei Vehicle Dwellers spokesperson Jimi Hart said the council had clearly stated PVDs were outside the intent of the bylaw it used to manage the district's freedom campers. It could therefore not move the group on under this regulation.

The ever-growing PVD settlement-on-wheels is in a tsunami evacuation zone. It has about 30 mobile dwellings including housetrucks, old unregistered buses, old campervans, caravans, vans and cars that are home for about 50 people living on the site nightly.

The council-owned carpark - dubbed homeless heights by its locals - is on Whangārei's Okara Drive/Porowini Ave roundabout corner and is a crucial parking space for the multi-event stadium and cricket. Its PVD encampment is the biggest in Northland.

"It's the off-season now and I've never seen as many vehicles here as there are now, even over the summer peak," Hart said.

Many of the PVDs are challenged by the district's growing housing affordability issue. A recent WDC housing monitoring report said there was a growing issue of affordability in the district aligned with a rapid property value increases. Rents had gone up. It had become more difficult to transition from renting to home ownership.

"Many of these people don't have other options," Whangārei One Double Five chief executive Lisa Cassidy-Nelson said.

The situation was complex, solutions multiple, she added.

The carpark provides parking for the adjacent 25,000 capacity multi-event stadium and up to 5000 people at Northland Cricket's Cobham Oval games.

Northland's first major post-Covid lockdown rugby game will be held at the stadium in eight weeks.

Bell said it would be concerning if the parking space was not available. It provided crucial close stadium access for older people, the disabled and young families, he said.

"I would be distressed if they turned up and couldn't get access to the games."

Hart said the PVD 'settlement on wheels', working with the council, moved out of the carpark for the day for events at the stadium and cricket pavilion.

Northland Cricket Association general manager Stephen Cunis said the Cobham Oval carpark would be used for games such as internationals including the Black Caps, that attracted larger crowds.

WDC manager health and bylaws Reiner Mussle said the council viewed PVDs as outside the intent of the bylaw and the Freedom Camping Act.

Cassidy-Nelson said PVDs could not be compared with freedom campers.

"One is a community that has choice, the other community is disadvantaged," Cassidy-Nelson said.

Mussle said he would be working with PVDs and other areas of council to develop practical strategies on how to better manage permanent vehicle dwellers and homeless people sleeping in cars - before the next freedom camping season.

Options could include finding sites where they were able to park for a longer time, with a permit system in place to manage this.

"However, such sites should be suitably separated from freedom camping sites, identified under the bylaw, to avoid rule confusion and allegations of double standards," he said.

Hart said parks that worked for Whangārei district's permanent vehicle dwellers should be created. These could provide user-pays facilities - $2 for a shower, power, hot soapy water for dishes, internet or a BBQ and $5 for a clothes dryer.