Checks on more than 1000 boat hulls around Northland this summer are showing improved results in the fight against unwanted hitchhiking marine pests threatening the region's marine environment. 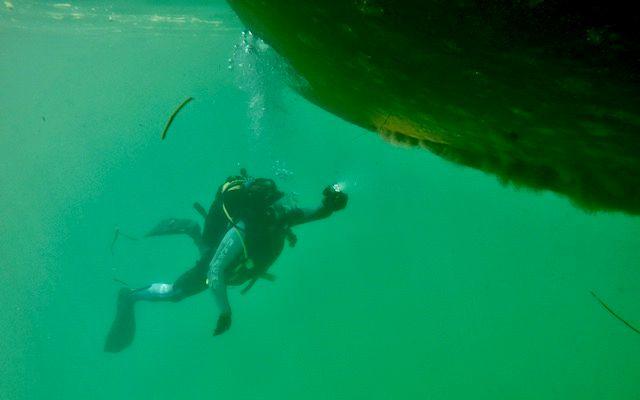 Northland Regional Council's (NRC) marine biosecurity manager Kathryn Lister said the "boats are way cleaner overall than they have ever been".

"But people still need to pay attention to making sure (marine pest) niche areas on the boat's hull are better checked," she said.

Niche areas included the bottom of the boat's keel, propellers, bait tanks and other areas.

"These areas require special attention when applying antifouling or during a boat's 'lift and wash' period. We strongly recommend double-checking them before a vessel goes back in the water after being hauled out," Lister said.

Seasonal checking, almost a decade of more intensive marine pest education, strengthened national legislation and local rules, marinas banning boats that can't prove they've clean hulls and councils and other organisations working collaboratively on the problem have all contributed to the decrease.

Northland-based Marine Environmental Field Services dive contractors are halfway through checking about 2000 boat hulls in an eight-month Northland inspection that began in September and runs until May.

They have checked 1119 boats across Northland harbours and boating anchorages, up to 40 a day. Vessels checked include recreational boats, superyachts, fishing vessels and barges. The boats come from Northland, Auckland and beyond nationally and overseas.

Inspections have been done throughout the inner and outer Bay of Islands including the northern Kerikeri area, Cavalli Islands plus Mangonui, Houhora and Whangaroa harbours.

The checks looked for two things - the presence of a specified handful of marine pests that like to grow on boat hulls and the overall level of slime and other general hull growth.

Lister said just 21 boats to date had been found to have the specific targeted unwanted hull marine pests being searched for.

NRC and owners had worked together to clean these up. Owners were asked to haul the vessels out and clean or treat them or, in some cases an isolated pest presence was removed by inspecting divers.

Divers will continue to inspect boats for another four months, checking 2000 all up by the end of the season.

The check is part of a growing fight against unwanted marine pests.

All boats coming into Northland or moving from one harbour to another must now have clean bottoms' under the Northland Regional Pest and Marine Pathway Management Plan. This means they must have no more than 'light fouling' on their hulls, defined as a slime layer and/or barnacles and just a few patches of macrofouling.

Northland Regional Council is part of the Top of the North Marine Biosecurity Partnership along with Auckland Council, Bay of Plenty, Hawkes Bay and Waikato Regional Councils and Gisborne District Council, plus the Department of Conservation and Ministry for Primary Industries. The group is working together to fight the spread of invasive marine pests in the north of New Zealand.

Lister said continuing effort was being put into working with the marine sector towards strengthening boat hull cleaning management in the haulouts and hardstand areas where marine pests were water blasted from hulls.

She said it was important for boaties applying antifouling to their hulls to do so in line with manufacturers' guidelines. Allowing enough time for the antifouling to dry hard before the boat went back into the water was also important in the fight against marine pests.