Staff and patients at Grey Base Hospital are facing increased health risks from old and outdated x-ray machines. 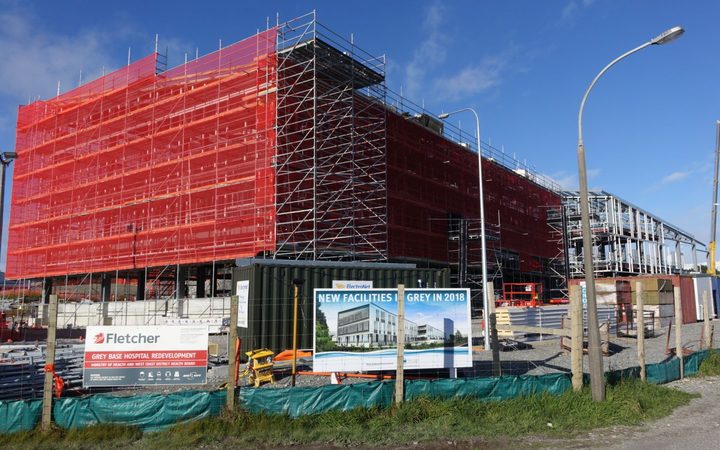 The West Coast District Health Board has held off on installing new imaging equipment, in the expectation that the new Te Nikau Grey Hospital was to open in 2017.

But two years on the building is still not finished, and Fletcher Building has not given the District Health Board a handover date.

Team leader Jason Lister said his main concern was the fluoroscope - the large X-ray machine that could take moving pictures.

"Its radiation output is higher than we would like. Because it's old, the images are not as good as they should be and the machine tries to boost its output to compensate.

"We are having to restrict people's exposure time or it pumps out too many X-rays."

It was no longer possible to use the machine for certain tests, Lister said.

West Coast patients needing moving images of their swallowing mechanism after a stroke, for instance, could no longer have that procedure in Greymouth.

"The speech and language therapists really need to see what's happening to help those patients, but at the moment they just have to manage without knowing exactly what's going on," Lister said.

New parts were no longer being made for the old machine, and if it broke down again, that would be it for the fluoroscope, he said.

"It breaks down a couple of times a year, and it can take three days to fix, when you count the technicians' travel time.

"It's pretty frustrating for staff, knowing we've got a shiny new fluoroscope sitting in a box in Christchurch that we can't use."

Installing the new machine in the old hospital then moving it again to the new one would cost $70,000 and was not an option, Lister said.

The other X-ray machine in use at Greymouth Hospital also presented some risk and inconvenience to staff and patients, he said.

"It's an old analogue machine that's had a digital conversion tacked on, but it can't take the bigger pictures that orthopaedic surgeons want these days.

"Instead of taking one picture from the hip to the ankle, we have to take several pictures and join them together. So West Coast patients have to have more X-rays than they otherwise would and that is not ideal."

Some patients now had to travel to Christchurch for the X-rays their surgeons needed, he said.

"After 20 years, those parts are starting to seize up and become harder to slide across, and it's more of a physical strain for us to move them."

"One hopes that Fletchers takes note of the real effects their delays are having on people's lives and they get the resolve necessary to finish the hospital built they tendered for and agreed to complete. I think all will appreciate the staff's professionalism and dedication to giving of their very best in trying circumstances," Barker said.

"This and also the earthquake risk at the old hospital is hurting morale.

"We know Fletchers is behind with projects all over the country for various reasons, but they should prioritise the hospital build because people's health and well-being are at stake."

Another former Labour MP, Clayton Cosgrove, who was tasked by the government with sorting out the $31m contract dispute between Fletcher Building and the Ministry of Health, says the dispute was not the cause of the delay.

"The delays are causing pain in the West Coast community, and increasing the risk to patients and staff."

Cosgrove said he and the Minister of Health had met with Fletcher's bosses and asked what they could do to speed up the hospital build.

"They blame constant building inspections but without that you don't get code compliance. You'd think with 90 percent of the job done, they'd be going hard to finish it."

Fletchers were the only ones who could fix the problem and needed to lift their game, Cosgrove said.

"I think it's high time Fletchers fronted up to the public and explained why they can't do that and what their problem has been with the management of this project."

Fletcher Building was approached by the Greymouth Star for comment but referred all questions back to the Ministry of Health.

"The ministry is the project manager for the new hospital and accountable for the performance of the project," Fletcher Building said.

West Coast and Canterbury DHB chief executive David Meates said staff were well aware of the limitations of the current radiology equipment and were doing their very best for patients with the resources available to them.

"It's important to note that radiology staff work closely with a physicist to ensure the current equipment is used safely and all precautions are taken to minimise patients' exposure to radiation," Meates said.