Trees lining a road in the Rotorua suburb of Fordlands have been pruned at a potentially hazardous angle, some residents say. 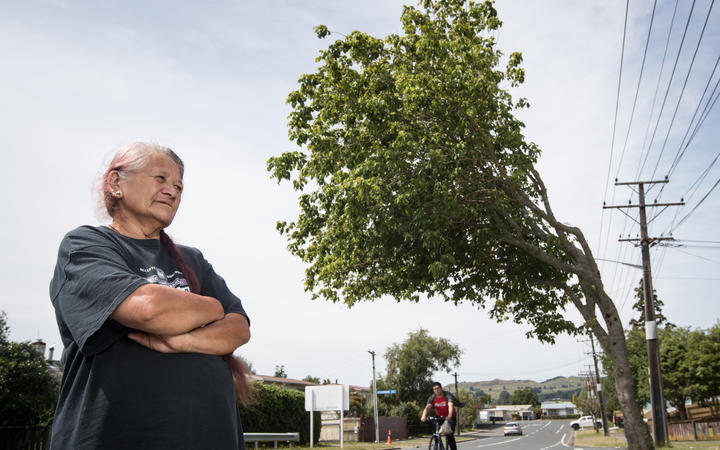 Ford Rd resident Su Marshall said she was concerned by the leaning shape of the trees on the eastern side of the street.

Marshall said the council came and pruned the trees about two or three weeks ago, but had neglected the other side of the road.

That meant the tree on the street near her house was also a hazard, with low-hanging foliage that scratched the top of some vehicles.

In some cases power lines also ran through that foliage.

Marshall said that was a fire risk and she wanted the council to address the issues.

"We have trucks that come up and down this road that knock off the branches. They're [the Rotorua Lakes Council] not the ones who pick it up. We're always the ones [who have] got to pick up the pieces."

Other residents on the street also expressed their concern about the angle of the trees, as well as the proximity of some foliage to power lines.

In 2018, following high winds and heavy rain, a more than 150-year-old oak tree in the central city fell, killing 56-year-old Trish Butterworth when it crushed her car.

Arbor Care consultant aborist Phil Sale said if a tree is regularly pruned in a certain direction, it is likely adapting to its position over time.

"It might look like it's on a big lean but its essentially as strong as a tree that grows up and down.

"It's highly unlikely to be [a risk] unless a tree moves in the ground."

Warning signs for that could include cracks in the pavement showing the tree roots lifting from the ground.

The amount of water in the ground could play a part, but the soil becoming water-logged was more likely to be something that built up over time.

He said the council now avoided planting trees near power lines, but the trees on Ford Rd would have undergone the same pruning method for "a number of years".

"This has caused the tree to essentially strengthen one side of the trunk more than the other and because the tree canopy is all on one side it intensifies the leaning look."

Contractors were required to prioritise maintenance based on safety risk and if the council was notified or observed any trees that required urgent maintenance, those would be prioritised.

Contractors were scheduled to continue pruning on Ford Rd this month.

"That's not to say you can't get strong winds [from other directions]."