The love of a park gifted by a town stalwart where dogs run free shines through in submissions to a land swap proposal for Sparks Park in Carterton. 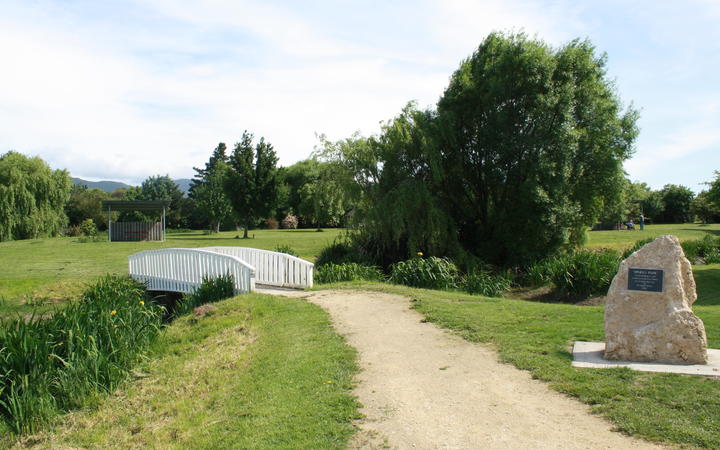 Dulcie Routhan gifted the park in 1999 and developer Molesworth Homes is proposing to swap adjacent land in return for a strip down the side of the park that will become a road to its proposed subdivision.

A trust that oversees the park is on board, and submissions were called on a partial revocation of reserve status to see how people felt before the developer applied for resource consent.

The submissions are now in, and what shines through is the appreciation of Routhan's legacy.

She died in 2012 in her 89th year, a foundation teacher of Kuranui College and the only child of the late Emily Sparks and William Routhan.

During her lifetime, she built up a portfolio of dozens of houses, collecting the rents herself.

There's a classic photograph of her mucking in at a tree planting day.

"It is perfect as it is, and exactly as Dulcie proposed" writes Pippa Cain.

"I feel strongly to shorten the length of the park and to put roading in on a second side would be to its detriment and entirely change the atmosphere of the relaxed dog-friendly haven it has become".

She said the developer was offering up a bog of no value, a comment made by several submitters.

Sue McIntosh wrote, "I love the place", and she was in favour of the land swap.

"I have made many friends in the park and so has my dog," she wrote.

What makes Sparks Park so special is that dogs are allowed to run off-lead, she wrote.

"It is not unusual to see 10 to 15 dogs chasing each other while their owners stand around chatting and keeping an eye on them."

Steve Hart agreed and said the park was a place where dogs could express themselves with "unfettered doggie behavior".

"It is something to behold when ten to 20 dogs run madly having what is undoubtedly a great dogs' day out".

Elaine Herve wrote there were "precious few places to go with our dogs".

Dog walkers were starting to feel less welcome at Henley Lake in Masterton and Sparks Park was the only place worth visiting with a dog in Carterton, she said.

Several other submitters made the point the park was in an area with a high water table and in a flood zone, saying new houses would be better built on the east side of the town.

Ryan Smock from Affordable Housing NZ Ltd wrote in support of the developer, saying they had a good track record and the experience to do the work to a high standard.

It would be a pity if they lost interest in Carterton.

There are currently no toilet facilities in the park and they're a possibility in developments stemming from the land swap, which also included new parking arrangements.

One person said most people only spent about 20 minutes in the park so toilets were not needed and if they were built it would only encourage freedom campers.

Julie Gellatly said "the size of the park will be increasing, the current problems with water supply to the lake will be solved, and having off-street parking and toilet facilities at the park are in the public's interest".

Hank Optland said when people purchased houses in Kenwyn Drive adjacent to the park, they expected it to remain as it was and also the planned subdivision was too intensive.

"Dulcie is unable to speak to the council from her grave, but we are certain that she, being an astute owner of dozens of properties in Carterton, had a very good idea what she was giving back in 1999."

If she had intended there to be a road where one is now planned, she would have said.

John Cooper said he had been offered the land being developed in the past, "once by Dulcie" who wanted it to remain as farmland or be planted in native bush.

He said it was not suitable for intensive development because of a high water table.

"I cannot comprehend why council would even consider residential development to occur on a known flood zone".

The proposal is supported by the Sparks Park Trust.

Chair Bill Knowles earlier told councillors the trust had entered into a memorandum of understanding with the developer and was happy with the results.

At a previous council meeting developer, Rudy Van Baarle, told councillors the changes would increase the size of the park by about 30 per cent and allow for the development of wetland areas to better support the birdlife.

"It's definitely a benefit to the community and the park," he said.

A person who signed off as "Paul" submitted that a town was not just about houses.