Nearly a year after it was set alight, Tāneatua residents are still waiting for a new police station. 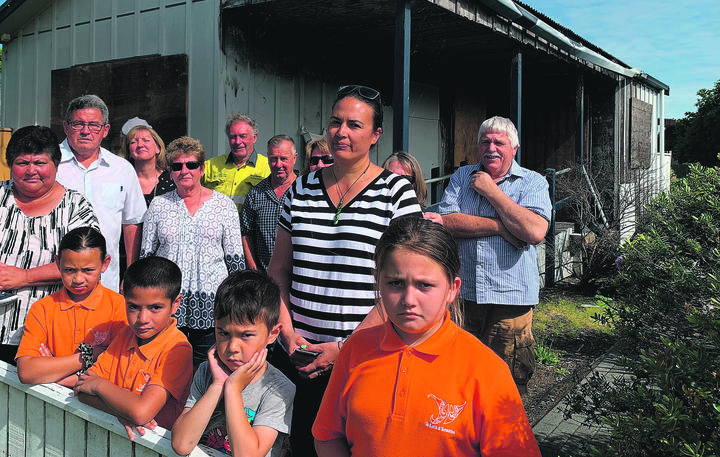 Tāneatua residents, including schoolchildren, gather outside the Tāneatua Police Station which was severely damaged in a fire nearly a year ago. Photo: Charlotte Jones / LDR

The Tāneatua Police Station was extensively damaged by fire in December last year and, in the 11 months since, it has remained a burnt-out shell on the main thoroughfare through town.

Community members were told in July the station would be demolished within six weeks and replaced with a new station combined with a community hub.

However, 12 weeks on from that promise, no headway has been made and the community is left feeling unsafe and disappointed.

"We keep having trespassers and poachers killing off stock. If the police were here, we could just go straight to them and talk to them, but now we have to ring through the call centre to Whakatāne where they may or may not come out."

Ms Dunstan said the burnt-out building only served to advertise the lack of police presence in the town.

"We just want our cop back, so I wish they would get on with it," she said.

The perceived lack of action has been criticised by many in the community, and Tāneatua School principal Marama Stewart said it was sad to see the community wasn't valued.

"We miss our community constable," she said.

"Whakatāne feels so far away, and we are a large rural community that values and needs the support of police."

Others like Shona Richardson and Wendy Masters questioned why the rebuild was taking so long to get started, and said the burnt building was an "absolute eyesore".

"We would feel much safer with a police presence," said Ms Masters.

Many community members are blaming the lack of progress on the partnership between police and the Tūhoe iwi authority Te Uru Taumatua (TUT). The two organisations are believed to be building the new police station together.

Honey Thrupp said she had heard that TUT were holding the process up, which she found "extremely frustrating".

"I am upset that only they have been given the right to speak for locals; why aren't we involved in this decision making too?" she said.

"We feel left out of the process and are getting no explanation as to why it's taking so long. I've heard the police are very frustrated, but their hands are tied as it's TUT holding up the process. TUT is only included in this so the police can be politically correct, but they need to be held accountable as to why they are dragging it out so long."

Mrs Thrupp said the lack of police presence in the town had made people bolder, tagging had increased, and there were instances of children throwing fireworks around unsupervised on the streets on Guy Fawkes' night.

A youth worker, who didn't want to be named, said he had not been consulted on the community hub, which surprised him as he didn't know who else would know better than him what the youth in the community needed.

A kaumātua, who also didn't want to be named, said the town needed the station rebuilt because families needed "protection and assurance they are safe".

Whakatāne deputy mayor and councillor for the Tāneatua-Waimana ward, Andrew Iles, said the lack of police in Tāneatua wasn't just a problem for Tāneatua but affected all the smaller communities in the large rural ward.

"Some of those communities may be waiting up to an hour for police to arrive from Whakatāne, especially if the Waimana Gorge is closed," he said.

Mr Iles also said the burnt-out police station didn't provide a good look for the town and would be especially embarrassing when Tūhoe held its ahurei in Waimana next April.

This is the first time in 21 years Waimana will be hosting the ahurei and more than 30,000 visitors are expected to flood the region.

"Tāneatua is the gateway to Waimana and people will have to drive past that eyesore," said Mr Iles.

"We may be a small satellite town, but we are entitled to the same services as urban areas, that includes having police. We are not asking for a mansion; we are simply asking for a vital service. Why are we waiting?"

Acting area commander Stuart Nightingale said police hoped the station would have been demolished two weeks ago, but said the project still had momentum.

Mr Nightingale said police now hoped to have it demolished by Christmas and were in the process of finalising the last matters to be agreed to before that could happen.

"It's certainly high up on my radar and on the commander's as well," he said.

"We are really looking forward to pulling it down and signalling to the Tāneatua community that one, we haven't forgotten about them and two, that they will be getting a new premise."

Mr Nightingale said the new premise was still in the design stage, but he expected it would be very different to what the community had before.

"It's our vision that it be very inviting in nature, fits in with and reflects the community's needs," he said.

"We want it to be available for other purposes, other than just policing."

Mr Nightingale said while it would not be a huge building, it would be a standout building.

Representatives from Te Uru Taumatua did not respond to requests for comment.