An investigation has been launched into whether mysterious plastic beads that have appeared scattered across Tairua Beach could be from the wreck of the Rena, which sank almost 10 years ago. 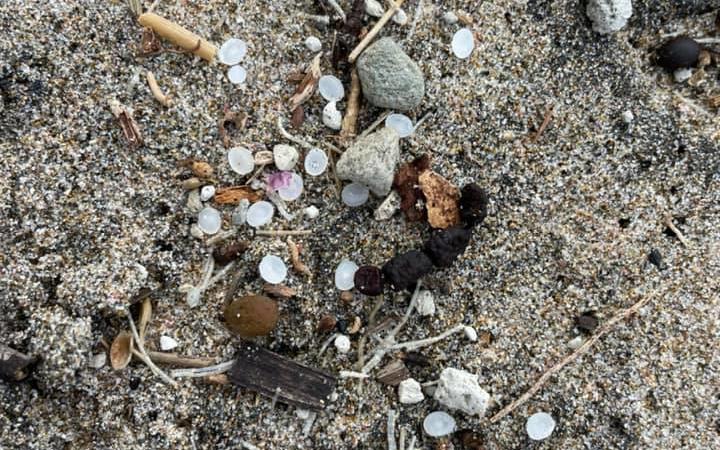 It follows a big community effort over the weekend to clean up the small plastic balls, which have also been found in the stomach of fish caught in the area.

If they are found to have come from the Rena, it will unlock funds set aside to deal with the disaster and a clean-up will need to be organised by the managers of the wreck.

But it is not clear whether pockets of Rena debris remain buried beneath the sand, at risk of being dislodged in future storms.

In October 2011, the MV Rena ran aground on the Astrolabe Reef about 12 nautical miles off Tauranga, resulting in the worst maritime environmental disaster in New Zealand's history.

As well as hundreds of tonnes of oil, dozens of containers were washed overboard and some of their contents spilled into the Bay of Plenty.

Almost all the debris was accounted for in the massive clean-up operation, but some were lost to the sea.

Locals' clean-up effort: 'It was sort of futile and quite upsetting'

Tairua resident Helinor Stead believed the thousands of plastic beads she found as she walked along the Coromandel beach last week was some of that unaccounted-for rubbish, which has found its way to shore after 10 years.

"The closer to the north end I got, the more of those wee beads we were seeing and so my partner and I were picking up handfuls of rubbish and then I realised I was down on my hands and knees picking up these beads and it was sort of futile and quite upsetting and I just thought man I'm not having any impact, just the two of us, we're not having any impact whatsoever on this." 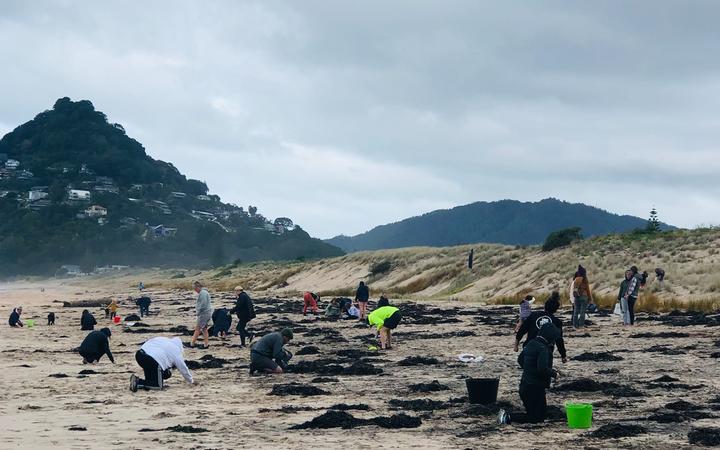 In the years following the Rena disaster, coastlines were plagued by similar plastic beads, and Helinor and other locals believed these were the same ones.

"One of the locals told me that a fish that he'd caught recently, and he had sliced open this cyst as he was filleting the fish and within the cyst were these beads.

"I guess it makes the sorts of things we see on films like Seaspiracy much more relevant because it's right there in front of us, we can't avoid it."

Unable to clear all of the beads herself, Helinor posted on her local community Facebook page to get some reinforcements.

Lo and behold on Sunday about 70 volunteers armed with shovels, bags and sieves showed up.

"Mostly families with young kids, I'd say it would have been about 50/50 adults and kids and everyone was just down on their hands and knees with colanders and sieves and buckets, just picking up as many of these beads as we possibly could."

"It was completely overwhelming. We could've spent all day down there and I don't think it would've made a visible difference."

And now she said other people had reached out saying the plastic beads, which did not pose a risk to the public or wildlife, had been found on other beaches up and down the coast.

"Te Karo Bay, which is further up the coast, Otara Bay, which is the next one round again yeah, apparently it goes right up the Coromandel."

Plastic factories could also be behind beads

Des Watson has been travelling to different beaches around New Zealand for the past two years collecting as much rubbish as he can. 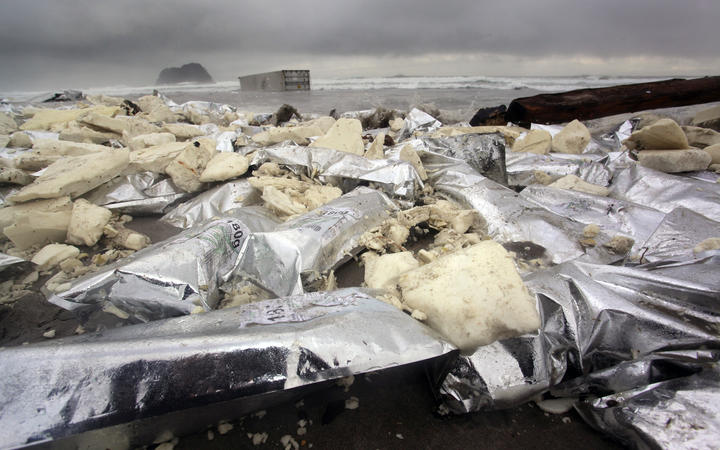 Watson has spent the past three weeks on Waihi Beach, and said the recent king tide washed out a lot of sand dunes and revealed rubbish and debris beneath.

"Over the course of 10-15 years, those dunes have been building up and whatever rubbish has been getting captured in those dunes, that all got washed out too so we have literally been finding millions of the little plastic pellets along the beach and they've been out in the water or in the dunes for the last 10 years, apparently, they come from the Rena oil spill."

Watson, who has visited about 500 beaches in the past two years, said he had seen these plastic pellets throughout New Zealand, but added that they could not all be attributed to the MV Rena disaster.

"They're using these plastic pellets and whether they're spilling them in the yard and they're going down the storm water drains or whether the transport companies are sticking their forklift forks through the bags when they're offloading them and punching holes in the bags and they are just spilling out everywhere. They could be spilt out on the truck while they're offloading it and all these plastic pellets are falling on the ground.

"In the case of seeing the millions of pellets out on Waihi Beach, I'd say they're definitely from the Rena oil spill." 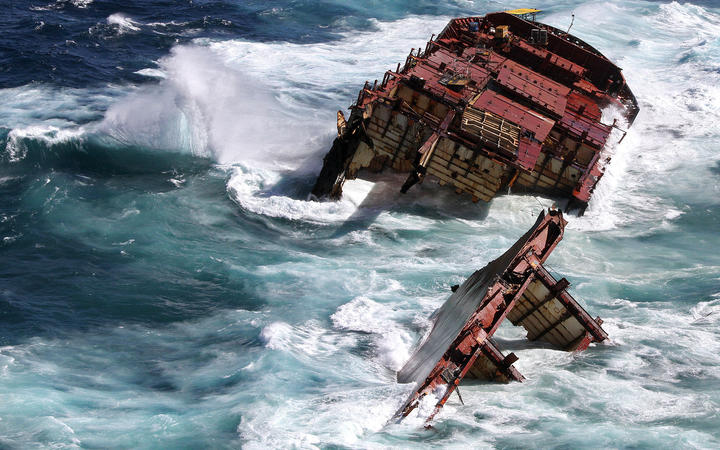 Whitianga Coastguard operations manager Graham Caddy said a large storm a couple of weeks ago caused big shifts to the sands on the seabed.

"It's just that the force of this particular storm and the amount of sand that's been shifted has brought it to the surface."

The Astrolabe Community Trust was set up to monitor, manage and mitigate any future issues relating to the Rena wreck.

The trust, which is funded by the Rena's insurer, would not be interviewed but in a statement said that big storms would continue to uncover any remaining beads from the Rena.

It said there were significant swells two weeks ago.

"The Astrolabe Community Trust is the holder of the consent and has responsibility for responding to any debris sighting, including beads."

A person from the trust will travel to Tairua and meet with the local team leader to help put together any further clean-up required this week.

Members of the public can call the Bay of Plenty Regional Council pollution hotline (0800 884 883) to report sightings of debris and beads. The council will then co-ordinate with the trust to activate the Shoreline Debris Management response plan.

In a statement, Maritime New Zealand said its understanding was that all cargo from the Rena was removed from the wreckage prior to the ship being "sunk" as a diving wreck.

It was not aware of any recent reports from other vessels which lost cargo consistent with the plastic beads.

Maritime New Zealand said regional councils would continue to undertake investigations into items which wash up on the shore.